Police in Zomba have arrested three people in connection with armed robbery at Magomero Catholic Parish in Chiradzulu.

Nyaude said the three suspects allegedly broke into the guest house of Father Vicento Troletti at the parish and made away with items such as video camera, four cell phones, a mattress, bed sheets, electric cables and two traveling bags containing shoes; 10 litres of cooking oil and kitchen utensils, all valued at K420 000.

“They were five and they fired bullets into the air using an assault rifle called R4 and an axe to scare people. They charged towards the priest at gun-point and demanded money. We have managed to arrest three but two are at large,” said the police spokesperson.

He added that some of the stolen items have since been recovered from the suspects such as bed sheets and electric cables, among others.

The three suspects are expected to appear before court soon.Â 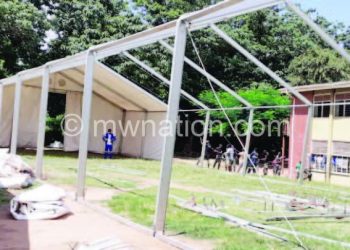