In few days time, your index finger will probably be draped in ink having voted for your preferred presidential candidate or party.

But regardless of how vested you’re in this election; whether emotionally or financially, be advised that making life plans based on your calculations of who may win May 21 is foolish endeavour. 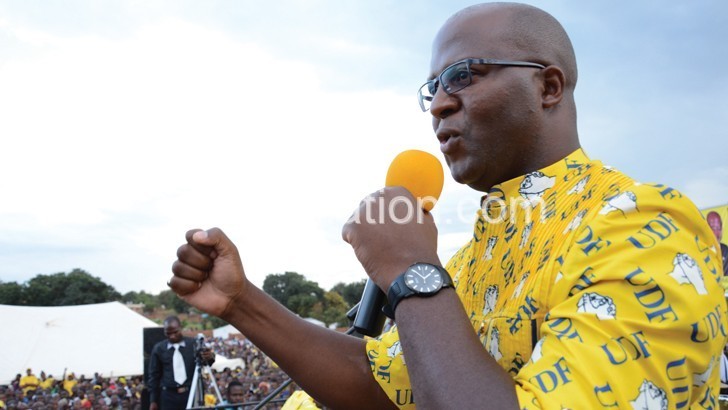 Last time out, some skipped this warning and one deputy minister, no less, ended up committing suicide and if that election was unpredictable, 2019 has taken unpredictability to yet another level—forget the bravado the candidates are displaying.

So good luck to whoever will win, there is a huge task ahead forging a new Malawi and uniting us towards a new common vision that can transform our current fortunes.

For the rest of us, let’s prepare ourselves for whatever eventuality and contribute to the nation-building effort once the dust settles.

There are six candidates on the ballot, but I guess it’s fair to concentrate on the four main candidates although truth be told, this is a three-horse race.

The fourth horse would’ve been UDF’s Atupele Muluzi. But after providing the UDF candidate with all hallmarks of leadership; charisma, skill, tenacity, and talent; Agenda for Change and platform of a former ruling party, providence must be wondering how he has squandered all that capital.

Four years, as observed by my good colleague Idriss Ali Nassah, is a long time in politics. “One election you are an electrifying, issues-based, attractive candidate, and four years later you are an irrelevant yellow joke promising free cellphones and laptops to everyone.”

The Nation’s Friday edition screamed: “Atupele faults DPP leadership.” Suddenly, Atupele’s gloves are off and belatedly, Muluzi is finding his lost moral campus to criticise the very same Peter Mutharika regime many had cautioned him four years ago from bedding.

Well, we don’t speak at all while we are eating, that’s African norm. But Muluzi has eaten in too many houses—only to come out at election time screaming wolf, wolf, wolf!!!.

So Mutharika won’t lose sleep over Atupele. He has MCP’s Lazarus Chakwera and his own deputy and UTM’s Saulos Chilima to worry about.

That two members of his own administration are challenging his presidency—as Nkhoma Synod rightfully described in its recent pastoral letter—is a vote of no confidence. And after presiding over the near implosion of the DPP with UTM’s birth, Mutharika contests the elections with a cloud hanging.

But you must be a novice political watcher to count out a party as strong as DPP in any election. Its loyal base is one the biggest, tribal, rural and loyal enough to pay a blind eye to most of Mutharika or DPP’s shortcomings.

A good number of it was won over by the DPP’s track record in transformative past and is yet to be convinced of the alternatives.

Then, there is Chakwera. The charismatic preacher-turned-presidential hopeful has done all he can to roll the dice on the country’s oldest political establishment’s election fortunes—by expanding the party’s vote hunt beyond its traditional Central Region stronghold.

Chakwera has invited veterans from other parties into fold and forged alliances with heavyweights like former president Joyce Banda and former Vice-President Khumbo Kachali.

But there are some who will never forgive MCP’s atrocities of the one-party-era and who question his new political acquaintances as a sign of a leader without principles.

Romance with one of them, running mate, Sidik Mia, a rich but recycled politician- meant a possible formidable coalition with Chilima’s UTM was never seriously explored.

Save for the arrival of Chilima on the scene, MCP was almost guaranteed of capitalising on the public disillusionment with the Mutharika regime but now is embroiled in a rat race none knows how to will end.

Chilima, the former corporate executive turned Vice-President, has been blistering with ideas and imbued the campaign with levels of energy never experienced before. He is salivating for the same youth votes as Chakwera and riding on the same transformative agenda, too. Contesting under a new party yet to be tested in elections, Chilima has the biggest handicap of all the candidates but has campaigned as a man possessed, day and night, village by village.

He has promised a new Malawi while supported by surrogates with a chequered past. Like Atupele he has belatedly found a voice against the ills of the Mutharika regime and promised a crusade against corruption without disclosing the source of his well-choreographed campaign.

One of the three will be our president. Bring May 21 on!