When they found themselves in a rocky, mountainous and forbidding area where the angels of Blantyre Water Board (BWB) fear to tread, they were stretched for options. But a little genius and heavenly providence changed everything for the people of Naotcha and Chilobwe who live along Soche Hill in Blantyre. Bright Mhango marvelled at the ingenious solutions to the water problems.

What does a community perched on a hillside with no water do?

If your answer was â€œrelocateâ€ you would get half a mark because the real answer is â€˜die.â€™ For the Nawotcha community in Blantyre, however, they chose never to die nor relocate, and through some genius and altruistic moves of a few, everyone is happy and well watered.

The upper part of Nawotcha and Chilobwe has been without piped water since piped water began. All along, the communities had to rely on water that naturally occurs on the leeward side of Soche Hill.

The water was seasonal, murky and soon the boom in population mated with the decline in tree population along the hills saw the water drying up.

To get water, one has to get further up the hill.

â€œWe would go up there in the hills at night to draw water because during the day there would be many people and some would fight over who gets to draw water first,â€ said Fagesi Tchinga, a long-time Chilobwe resident.

Blantyre Water Board has not even bothered to get its pipes near the area, maybe because most families there are generally poor or because the topology of the area is forbidding.

We may never know. What we know is the people were caught between hard rocks and dry wells.

Joel Tchinga, husband to Fagesi, narrated the story of Nawotchaâ€™s bad water days. He spoke from his house, which is one of the very last before Soche Hill becomes uninhabitable due to steepness.

The house is sandwiched between huge rocks and right in his courtyard grows a Mubanga tree, a tree one would find in a real jungle and yet here 15 minutes from Chilobwe Centre it stands.

â€œIt started as a political thing. Mr. Magwira and Mr. Chimombo wanted to be elected as councilors, so they brought the idea of bringing water from up the hill. It was part of their campaign moves,â€ said Tchinga.

The two never got elected, but their idea of harnessing water caught on among some people and so Tchinga and about eight other people invaded the hill.

Each one of the eight lays their own pipes, has their â€˜ownâ€™ spring and a water kiosk where they sell water to the rest of the community.

Tchinga has two water selling points; one is watched by his son and the other has an employee. For anyone to tap 20 litres of water, they part with K15 and, according to the family, one tap turns over about K1 000 per day.

â€œI have two children in private schools, another is in college. I have put iron sheets on my house and the rest greases the running of this household. If a senior loafer like me boasts of being alive, itâ€™s because of this water,â€ said Joel, stroking his long grey goatee.

He has worked as a watchman in several big companies since arriving in Blantyre in 1980 from his home in Nchalo. He has lived in Blantyre long enough to own some land amongst the stones of upper Chilobwe where he has built some houses that he rents out.

It is from this rent that he got the funding for his water project.

The water is tapped from natural springs about two and a half kilometers from his house. This is because he said he laid about 600 pipes each stretching four metres. He placed some cement around the spring and channeled the water into his pipes.

No pumps, no damming.

The water comes straight to his house from where it goes to about 10 private customers and the rest goes to the selling points where women crowd around to fill their water canisters.

It has not been an easy road for the Tchingas. Many times than they can remember thieves have stolen their pipes. The family had to go into debt just to replace the stolen pipes.

â€œThey stole my pipes so many times that I wanted to quit, but I told myself not to, not just because we find soap from the water, but because we need the water. One night, the water suddenly stopped. I went up there with a weapon and missed one of the four vandals by the hair. Since then, my pipes have not been stolen again,â€ said Tchinga

Fagesi, the wife, said the coming of the water means little headache because the place she used to draw water from was far and that the water was not clean especially after the rains.

Confronted on the quality of water the family reticulates to the community, the Tchingas insist theirs is some of the best water flowing out of Blantyre taps because it comes from a hill that is not inhabited and is filtered by the rocks before going into the pipes.

The family said they have special days that they go to clean their water source, but ruled out using water purification agents, saying if they apply chemicals, they go right down since there is no dam.

The hill is fast losing trees and just like the springs they used to draw water from, the existing springs are on their way to extinction if the rate of trees being felled continues, a scenario that scares Tchinga.

â€œThe sustenance of the spring is at Godâ€™s mercy; He can dry it up even tomorrow, but as for the trees, it is true that they are fast going and that the hill is drying since the trees provide shade for the water,â€ said Tchinga.

He said he and his fellow water providers formed a committee that replenishes and re-afforests the hill, saying they plant up to 2 000 seedlings per year, but said it is not enough since wanton felling of trees goes unchecked.

He said although there are guards to check tree felling of trees, some community members go and cut trees at night.

Tchinga said some people bribe the watchmen and cut the trees.

Tchinga and his fellow water providers do not have the legal mandate to patrol the hill or stop people from felling trees since the hill is under government control.

â€œIn the near future, we want to be more aggressive in protecting the hill; we will decide how to do this and take our proposition to the forestry department,â€ he said.

Demand for the water goes down sharply when the rains start. Households get their water from the many seasonal springs that pop up on the hillâ€™s foot.

Some people trap water from their roofs, but when October comes, demand for Tchinga and companyâ€™s water goes through the roof.

â€œPeople come this side from Chilobwe Centre, especially when the BWB water stops flowing, but the problem is that when October comes, our water pressure also drops. After all, my pipes are only two inches wide as you saw,â€ said Tchinga.

But a drop in water pressure is better than living in Zingwangwa in some adjoined houses with no pit latrine and yet with water flowing only from about 11pm.

When water stops flowing in this part of Zingwangwa, women remember their days in the village because they have to travel long distances trying to sniff for taps that are still running.

The latest Joint Monitoring Programme Report by Unicef and the World Health Organisation says 95 percent of people in urban areas and 80 percent in rural areas have access to safe water.

This statistic is, however, contested by the charity Water for People – Malawi which says the de facto water situation in the 21 low-income areas of peri-urban Blantyre is that only 62 percent of people have access to water that meets government standards.

BWB will probably never bring their pipes to upper Nawotcha and the natural spring is not likely to dry up in the next three years. During this period, people of Nawotcha will not have water-induced headaches.

When or if the springs dry up, you will hear from Tchinga again. 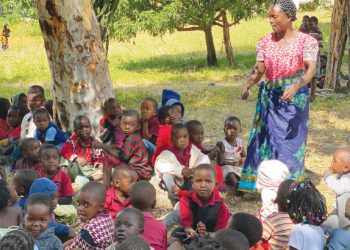