by Martha Chizuma
in Editors Pick, Political Index Feature
8 min read
0
Share on FacebookShare on TwitterShare on WhatsAppShare on LinkedinLinkedinShare via Email

“There is no sense of direction. I ask President [Lazarus] Chakwera to show leadership and govern the country. There are no drugs in hospital, no food, fuel prices have gone up and Malawians cannot afford public transport.”—Ex-president Peter Mutharika, Nation on Sunday, December 12 2021.

It has been stated at different platforms that any effective fight against corruption depends largely on an independent and courageous anti-corruption agency, a judiciary with integrity and, most importantly, the right tone from the top leadership in this case the Presidency that clearly demonstrates determination not to tolerate such evil regardless of the status of the perpetrators.

The Presence of Vice-President Saulos Chilima today is a clear indication of yours and President Lazarus Chakwera’s personal commitment in the fight against corruption. For this, receive our sincere gratitude.

The theme that the Anti-Corruption Bureau has chosen for this year’s commemoration—Integrity: Key to a Corruption-free Malawi—was carefully thought considering the corruption trends in the country.

The levels, intensity and sophistication of corruption in the country continue to rise and constitute a living threat to any meaningful development and aspirations of this country.

To others, this statement has been interpreted as defeatist. But for us at the Bureau, comforting lies about the extent of corruption has made us lose opportunity for meaningful interventions. We believe that it is better to state the hurtful truth about this problem, face it head on and deal with it comprehensively.

And the hurtful truth is that corruption continues to kill Malawians. Corruption has taken away our schools, health centres roads and many other public services. Corruption has scared away investors, taking away potential jobs.

The list is endless, but these few examples show how destructive this evil is.

It does not matter that you don’t commit acts of corruption, it will still hit you badly. Therefore, keeping quiet about it is not an option.

That is why the bureau through the National Anti-Corruption

Strategy will never stop imploring Malawians to join hands with us in this fight.

And since laws and procedures do not seem to deter people from committing more corrupt acts, that is why we are emphasising on integrity or umunthu as one way of appealing to the moral conciseness of Malawians to hate corruption.

Corruption and other malpractices are mainly motivated by lack of integrity.

It is lack of integrity in almost all our governing political parties who, after almost three decades of multiparty democracy, have still not figured out legitimate ways of funding their parties, but have consistently sacrificed public services and goods meant for the people they are governing at the altar of questionable multi billion kwacha contracts to unscrupulous business people for kickbacks as a way of funding their parties to purchase party T-shirts and cloths as if that is all Malawians are entitled to.

It is lack of integrity in both private and public sector that is causing public procurement to be marred with high corruption, heavily draining public revenue for nonexistent or substandard goods and services.

It is lack of integrity in both recruiters and job seekers that is causing corruption in employment, reducing efficiency of our institutions.

It is lack of integrity in both contractors and suppliers that is causing corruption in construction industry, leaving us with so many questionable projects.

It is lack of integrity in law enforcement and judicial systems that are making majority of people lose confidence in the justice system.

That is why we implore Malawians to have a moment of self-reflection and decide to embrace umunthu as one way of dealing with corruption. We are imploring the people of Malawi to choose to do right because it is right to do right.

Malawi is in great need of people who will not be bought or sold at the expense of their country, people who in their inmost souls are true and honest and do not fear to call that which is wrong by its name and stand for the right thing.

This country needs such people to stand up so that we can deal with corruption.

For us at the ACB, the events leading to this day start with the Anti-corruption Awareness Month from November 8 every year. This year, we launched this in Zomba with a walk against corruption and finished with another march in Mzuzu.

The International Corruption Day is a day which reminds citizens about their role in fighting corruption and government renews its commitment to the fight.

At the bureau, we see that the awareness month has registered significant successes. Apart from monitoring service delivery in various public institutions, we conducted surveillance operations in about 100 Affordable Inputs Programme (AIP) selling points across the country and intervened where poor farmers were being short-charged by various officers and about 30 cases of corruption are under investigations.

The bureau also launched anti-corruption clinics in Mchinji to bring its services to the local communities.

At the moment, the ACB is only in the four regions of this country. The clinics will ensure that local communities get same service as people in the cities and even much better because these clinics will be more focused.

In this way, a NyaGondwe in Rumphi, a Mr Banda in Ntchisi or a Nagama in Phalombe will see the bureau intervening on corrupt acts that have deprived them of various social services be it a maternity shelter, better roads or school block within their localities and within reasonable time. We will see to it that justice has been done.

It is our hope as well that the clinics will start providing the geographical trends and statistics of corruption in the country and inform the appropriate interventions.

During the Anti-Corruption Awareness Month, the bureau in collaboration with Ministry of Justice and the United Nations Development Programme held a high-level National Anti-Corruption Dialogue virtually graced by the Vice-President.

The participants discussed what we believe are game changers in the country’s anti-corruption fight.

Following the Dialogue, we undertake to Malawians that by end of first quarter of 2022, March 31, there would be substantive progress in the incorporation of issues of integrity and ethics in primary school curriculum; life style audits and investigation of unexplained wealth would be in full operation within the

Bureau and that asset recovery would accompany any appropriate criminal investigations the bureau conducts.

Court, there should be an administrative arrangement where corruption and other financial crimes involving more than one billion kwacha or politically exposed persons be assigned to a particular judicial officer and be dealt within a maximum period of six months as opposed to the current situation where these cases take years to be completed.

We are confident that this is achievable because President Chakwera and yourself [Chilima] have shown your dedication to the anti-corruption fight. To put it on record, the ACB has recruited more officers in its various sections by virtue of the authority to recruit 62 more officers which the government granted few months ago.

The ACB has also enjoyed 100 percent funding of its operations, albeit not without challenges of accessing the funds.

Assuming that government support does not change, when we meet once more for this commemoration next year, I ask you not to give us a chance to give excuses why we could not do these things.

They are a must-do for Malawi and the only thing expected from us on December 9 2022 should be substantive progress reports on these action points. These we undertake to the whole nation. To all Malawians, let us remember to embrace umunthu as a virtue to make a corruption-free Malawi. 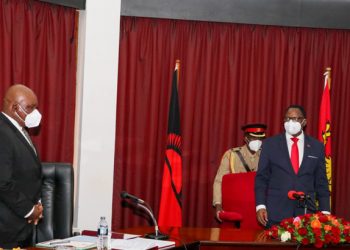