Ahead of the 2019 General Elections and the June 23 2020 fresh presidential election, rival politicians vying for the high office made so many promises to Malawians, including the near unanimous political chorus to improve the plight of people with albinism.

During these campaigns, both the Democratic Progressive Party (DPP) and the nine-party Tonse Alliance promised improved accommodation for people with albinism to enhance their safety as the country was registering increased attacks and ritual killings.

A total of 13 993 houses were earmarked for construction across the country during the DPP era.

However, our investigation reveals that to date only nine of the planned 13 993 houses have been completed with 13 in progress whereas six have literally stalled. The remaining 13 965 houses cannot be traced.

“It was all promises. We are worried,” reacts Maynard Zachariah, acting national coordinator for Association of Persons with Albinism in Malawi (Apam).

“Looking at what our members are going through in the country and politicians wanting to gain political mileage on our issues by promising us things they are failing to implement is a total mockery to the albinism community in the country,” he adds.

It started around 2019, when the DPP government claimed it had allocated K600 million for the construction of five houses for people with albinism in each constituency. Meaning out of 193 constituencies, the government would construct 965 houses across the country.

To date, according to Zacharia, no house has been constructed under this project.

Another promise came from former president Peter Mutharika himself, who in March 2019, publicly committed to provide decent housing for people with albinism. The directive was that these people would be included in the Decent and Affordable Housing Subsidy Programme (Dahsp), following increased cases of albino killings.

Potential beneficiaries were identified but until today no single person has benefited.

“Our memories are fresh on this promise, but I can tell you that we have no record of our members benefiting from this project,” says Zachariah.

Later, in the same year, government announced plans to construct 13 000 houses for people with albinism across the country. The then minister of Housing, Lands and Urban Development Symon Vuwa Kaunda confirmed with our sister newspaper The Nation of September 16 2019, and claimed that two houses in the North had already been constructed, but reality on the ground, as confirmed by Zacharia, shows that no single house was built in fulfillment of this promise.

In the 2020/2021 National Budget government allocated K400 million for the construction of houses of persons with albinism “to enhance their safety”.

This project started in 2020 and projected to be completed by March 31 2022. This timeframe has passed; however, government has only built nine houses with 13 in progress and six slowly progressing, one each, in Mangochi, Machinga, Kasungu, Karonga, Mzimba, Neno, Mulanje, Nkhotakota, Dedza, Lilongwe, Ntcheu, Mwanza and Nsanje.

“Yes, only nine houses have been completed of 28. We just hope that those houses that are not yet at completion stage were completed by March 31 2022 since after this period the funds can no longer be used,” he says.

“If the status is still like this, it means we won’t be talking of 28 houses constructed, it will be less which will be a great disappointment to us,” he adds.

In Mangochi, where National Statistical Office data of 2018 shows there were then 9 684 people with albinism, only two houses have been completed.

Martin has four daughters with albinism. Together with her husband, the family has been under pressure to protect the children due to increasing cases of albino killings in the country.

The family has been sleeping in an insecure house which was easy for abductors to find their way in.

“Tikamagona ndimachita kutsekera ngati pakhola la mbuzi. [We used to close ourselves in the house as if it were a goat house]” Martin narrated her situation.

“During [political] campaign period life was difficult and we were walking like a family to make sure that my daughters are protected,” she said.

Her story changed on November 14 2021 when she was selected to benefit from the house project. Today, Martin is a happy person with her family.

In the just approved National Budget, government has allocated K500 million for the construction of houses of people with albinism.

Zachariah says the amount is on the lower side and would not make any difference with the rising cost of living. Malawi has over 134 000 people with albinism, representing 0.8 percent of the population, according to the National Statistical Office data of 2018.

How poor houses have affected people with albinism

It was around 3am on Sunday, March 13 this year when strangers visited Emmanuel Davie, a person with albinism in Lirangwe, Blantyre.

Davie, 22, was sleeping together with her new-born baby and wife when he heard people talking outside the house.

“They were asking each other which house belongs to me,” he continued: “Later they settled for one house, which was mine and they started breaking the door.

“If it were not for the people who readily came to our rescue after we shouted for help, today I could have been dead,” he added.

Till to date, no suspect has been arrested. Davie said police officers from Lilongwe and Zomba plus Apam leadership visited his house after the incident.

Zachariah said the house which Davie was sleeping in was not protected and it was easy for abductors to attack him.

A similar case was reported in Mchisa Village in Traditional Authority (T/A) Kawinga, Machinga District where an unknown people broke into a house and abductd a 13-year-old girl with albinism, Catherine Laston.

Catherine’s mother, Chrissie Stephano, said kidnappers found it easy because she was sleeping in a poorly secured house whose door was made of grass.

“They just kicked the door and entered the house. They attacked me before grabbing my daughter who was born with albinism. Neighbours came to rescue my daughter and she survived the attack,” she said.

Ministry of Lands spokesperson Enock Chingoni said the project to construct houses for persons with albinism across the country in the 2019/2020 financial year was suspended despite conducting the assessment of the identified sites.

“No single house was constructed during the period because the project never got funded,” he said.

Commenting on the 2020/2021 financial year, Chingoni said the ministry planned to accommodate the construction of houses in all 193 constituencies in the Dahsp budget. He said the plan was not implemented because, again, Dahsp was not funded.

Malawi Human Rights Resource Centre (MHRRC) programme officer Enock Chinkhuntha said most persons with albinism who were mercilessly attacked were as a result poor houses, which were easily broken into by assailants.

He said safe and secure houses for needy persons with albinism would scale-up their safety and security. He said through their monitoring visits to districts, not much has been done in regard to government projects for people with albinism.

“So far only 28 houses are under construction which is not a good indicator at all. It is our hope that much effort will be put on this issue in the 2022/2023 Nappa, as this is to do with people’s lives and should not be compromised in any way. MHRRC engaged parliamentary committees on Health and Budget to prioritise funding towards Nappa so that we see significant progress in this blue-print.” he said.

Apart from the housing project, the Malawi government donated gadgets to people with albinism so that they should alert the community when a person with albinism is under attack.

Zachariah said security gadgets were distributed to members in many districts but most of the gadgets are no longer in use.

“The programme had issues, like it was highly publicised.  Plus that they were supposed to be charged and a bigger number of our people live in the village where there is no electricity,” he said. 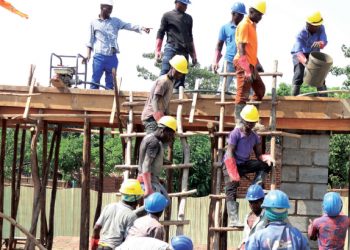