Their fears come against the backdrop of Treasury’s continued borrowing through issuance of T-bills—monetary instruments used by government to borrow money from the public—in the process choking the market and crowding out the private sector. 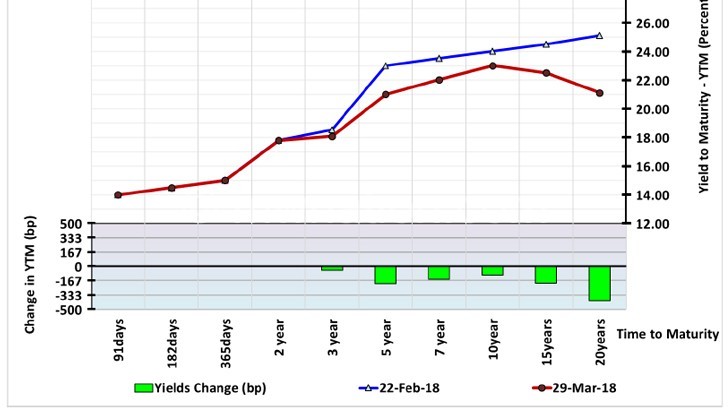 Reserve Bank of Malawi (RBM) figures show that over the years, Treasury has raised billions through T-bills with recent a report showing that in April this year alone, K438.14 billion was raised, a 13 percent jump from K384.63 billion in March.

This only shows that Treasury’s insatiable appetite to borrow from the market continues unabated.

The increasing trend was similar in the past four years where between the last quarters of 2015 and 2017, money raised through T-bills increased from K106 billion to the current levels, according to RBM quarterly reports.

Following this, rates on T-bills have been at around 20 percent only to drop in recent months to about 15 percent, which is way above the current inflation rate at 8.6 percent.

Economists and money market analysts this week argued that the continued borrowing on the domestic market has the potential to push up lending rates and throwing government in a debt trap with central bank figures showing that domestic debt is currently at around K1.2 trillion.

Economic statistician Alick Nyasulu links the surge in domestic borrowing to the reduced ability by the private sector to borrow since government debt is risk free.

“One can speculate that this is the reason it is difficult for the private sector, including small businesses to borrow yet they are the engine of growth and job creation. You cannot compete with government when it comes to borrowing and banks will always prefer government debt since it is risk free,” he said.

Economics Association of Malawi (Ecama) president Chikumbutso Kalilombe, in an interview, said regardless of the borrowing avenue, elevated borrowing levels have potential to cause macroeconomic imbalances.

“The country’s debt has reached unsustainable levels. This outturn also implies that as a country, we may have problems in serving our debt since debt is on average growing faster than the country’s gross domestic product,” he said.

On his part, market and investment analyst Cosmas Chigwe said increased government borrowing is always inflationary in the long-term due to increased interest accrual.

He cautioned that in the run-up to the elections next year, it is important that increased government borrowing should not directly result in increased spending.

“With regards to T-bills, we fear this will result in upside inflationary pressures both on demand side and cost side and it will become difficult for the Central Bank to keep inflation within check as open market operations can only take up so much,” he said.

“The ballooning domestic borrowing is worrying for the private sector because this is likely to influence an upsurge in interest rates and crowd out private sector capital,” said Chancellor Kaferapanjira, chief executive officer of Malawi Confederation of Chambers of Commerce and Industry (MCCCI).

Deepen and broaden your skills

Deepen and broaden your skills