Another side of Bangwe clinic

It is around 3pm when we arrive at Bangwe Health Centre in Blantyre, where four suspected cholera cases recently spent days in an isolation tent before tests proved negative.

Along a narrow tarmac road splitting the populous township, piling filth spills into drains and streams. Nearby, some residents sell ready-to-eat food and water repackaged in used plastic bottles.

The risk factors for cholera escort visitors to the gates of a hillside health centre, where some sinks have been stuffed with patients’ files since taps run dry last year. Bangwe Health Centre relies on two boreholes, an escape from piped water that often seldom flowed due to low pressure and disconnections due to unpaid bills.

Past the gate is tall grass, a breeding ground for mosquitoes which spread malaria.

But some women waiting to give birth at the facility say mosquito bites scarcely haunts as much as a foul smell in the air.

The stink from pit latrines, where staff dumps bucketfuls of placentas—a lining of the womb often ejected within 30 minutes after a baby is born—exposes a breakdown in healthcare waste management.

The rot in the air wafts into the wards and darkish hall where about 150 outpatients queue for hours to see clinical staff. They pinch their noses, pointing to a row of latrines in the fence as they rue the overpowering smell hardly experienced in private clinics that serve well-off patients with medical insurance.

They find it strange that health workers dump bucketfuls of rotting placentas in the latrines as the Ministry of Health require every clinic where women give birth to have a placenta pit as one of basic water, sanitation and hygiene facilities.

But clinician-in-charge Kelita Bvundula states that the dumping of placentas in a new latrines as desperate measure because the pit is full.

“It was already filled up when I arrived from Limbe Health Centre in December, so we have no choice but to throw the placentas in one of eight new toilets. Previously, we used to transport it to South Lunzu Health Centre in Machinjiri, but we stopped because there was no ambulance,” she says.

The clinic has been struggling to handle the waste from mothers giving birth for over a year, old-timers say. According to them, the ambulances that sporadically carried smelly buckets to South Lunzu, almost 15 kilometres away, were halted due to competing needs and lack of fuel.

“The toilet really stinks, but we can’t throw placentas in the open or tell the women to dispose them on their own,” bemoans Bvundula

At the height of the crisis, midwives were keeping the placenta bin in a corner of the maternity section for days. By the time an ambulance arrived here, they say, the room was stinking nauseating—a harsh, degrading environment for health workers, patients and pregnant women.

Some mothers feel they had better carry their placentas home to bury them with dignity and reduce air pollution.

The stench silently pushes women into the dangers of giving birth at home despite a government policy for every baby to be born in clinic at the hands of a skilled attendant.

Others endure off-pocket payments in private clinics although the country has embraced the Universal Health Coverage (UHC), guaranteeing everyone equitable access to quality health care without enduring financial hardship.

Not having a placenta pit at busy health facility like Bangwe “highly compromises the quality of care”, says the commentator, from Oxfam Malawi.

He says: “UHC is about equitable access to health care, improved quality of health care and protection from financial risk. As such, safe healthcare waste management is fundamental for the provision of quality, people-centred care, protecting patients and staff safety and safeguarding the environment.”

Bangwe Health Centre serves a population of 219 000 in the clustered town.

Last year, the delay to open a new placenta pit triggered a flurry of protests, including petitions, ultimatums and strikes by the health workers.

As contractors dig deeper, concerns are rising among the skilled healthcare staff that the pit taking shape is too small and may fill up in no time. The concerned staff feels the digging underway only postpones the problem. Birth attendants do not want to swiftly revert to the nauseating stink they have been enduring in labour ward that reeks rotten fresh that once provided unborn babies with food and air.

“The good news is that a new placenta pit is taking shape,” says district health officer Dr Gift Kawalazira. “It is true that the placenta pit filled up, so we had to construct a new one.  As a temporary measure, we had advised them to use one of the new toilets to dump the placentas.”

The process has taken a long time because of the rainy season and the procedures to recruit a contractor, says the doctor.

“We have to admit this has taken a long time and it’s an inconvenience to everybody, including health workers. But, as we are talking, the new placenta pit is almost complete. n 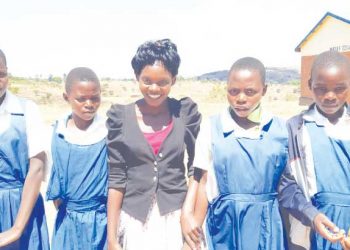