Eighty-one years of selfless life justified the multitude from all walks of life, including Malawi President Joyce Banda, who on Wednesday braved the Chikhwawa heat to witness burial of Catholic Bishop Emeritus Felix Eugenio Mkhori at Mzimu Woyera Cemetery.

It was exactly at 1.05pm that Mkhoriâ€™s body was lowered to its final resting place.

From the eulogies delivered during the ceremony, which was climaxed by a requiem mass presided over by Bishop Peter Musikuwa of Chikwawa Diocese, it was clear Mkhori was not just another Malawian, but one who had lived a life worth emulating.

Also taking part in the mass were Papal envoy Monsignor Bert van Megen, eight bishops and over 150 priests from across the country.

President Banda thanked God for giving Malawi a clergy who lived his priestly life to the letter.

“I came to witness his burial as a man of God who gave his life for others,” said Banda who added that she was inspired by the late bishopâ€™s stewardship.

Archbishop of Lilongwe Remi Ste-Marie and bishop chairperson of the Episcopal Conference of Malawi (ECM) Joseph Mukasa Zuza also spoke highly of the life of Mkhori. 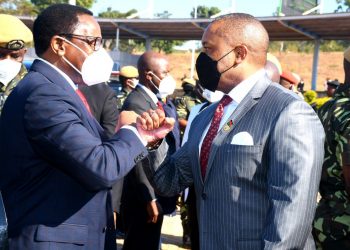