by Golden Matonga
in Front Page, National News
8 min read
0
Share on FacebookShare on TwitterShare on WhatsAppShare on LinkedinLinkedinShare via Email

Updated asset declarations for President Peter Mutharika and his Cabinet are so murky that assets tsar Christopher Tukula and legal scholar Danwood Chirwa say they border on law-breaking.

A Nation Online review of Cabinet members’ latest declared assets and liabilities shows that most of them have not disclosed money in their bank accounts, sources of their income and financial activities of immediate families such as spouses, which is a violation of the law. 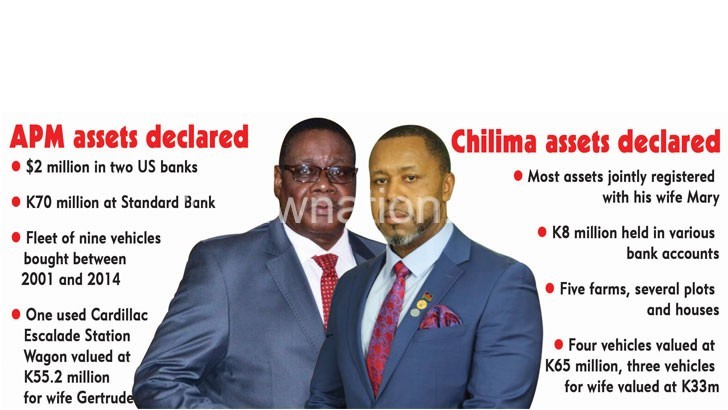 Failing to declare assets is a criminal offence punishable by two years’ imprisonment.

Section 15 (e) of the assets law obliges public office holders, their immediate family members and associates to declare their full financial status by disclosing details such as bank accounts, the location of the accounts and names of the banking institutions.

The section also requires full disclosure of any other asset the official or any member of his or her immediate family has financed, owns in any other name other than his or her own and description of the asset, its location, date of acquisition, amount paid for the asset, its current valuation, and name or names in which the asset is held or owned.

According to details of various declarations, Nation Online has accessed for financial years 2016/17 and 2017/18,most Cabinet members only named physical assets acquired and they did not declare assets of their immediate family and close associates.

Tukula said, in an interview, that while the law is clear that failing to declare financial income is a criminal offence,  his office cannot act now because it is still verifying the declarations.

Said Tukula, the Director of Public Declarations of Assets and Liabilities: “What you have observed [about most ministers not declaring income] is correct

“However, the schedules to the law we are using came as part of the law. Ordinarily, the annual updates were supposed to follow the same patterns and columns. They [framers of the law] assumed the officers will follow the law. We have tried to sensitise people, but most people are just giving updates on physical assets.”

He also noted that the law itself is not tight enough and the declaration forms lack clarity.

“The requirement on bank accounts is in there, but the forms are not clear enough. At the end of the day we have to decide whether the failure is inadvertent or deliberate, it could be deemed as dishonesty as the law wants us to know changes in income,” he said.

“At the end of the day, you must disclose all the sources of the income or assets—that’s the most important column. If it’s dishonesty, it is punishable by two years imprisonment,” he added.

Tukula, however, said the law is very clear that all declarations must include financial income and failing to do so was a criminal offense but said at the moment the office has no position on whether it will prosecute any officers for failing to comply with the law as it is yet to complete the verification exercise for the declarations.

According to Tukula, his office will embark on the law review exercise in the next financial year as part of its strategic plan implementation.

But Chirwa, professor of law at Cape Town University in South Africa, said there is no problem with the law as it stands. The problem, he said, is that the assets office is failing to enforce the law.

He said: “There are currently no loopholes in the law. If there is any lapse in enforcement, the blame must fall squarely on the director of Public Declaration of Assets and Liabilities in whom the enforcement of compliance with the law is vested.”

Chirwa said the Act clearly expects the listed public office holders and officers to declare all their assets, including income, shares, liabilities, debts and interests they and their immediate families hold as at the date of the declaration.

With respect to annual declarations, the legal scholar said the Act expects listed public office holders and officers to update their respective declarations and add information on any new assets, income and interests acquired and those lost or disposed of in the last 12 months.

On his part, Lingson Belekanyama, chairperson of Parliamentary Monitoring Committee that oversees operations of the Assets directorate, said failure by Cabinet members to comply with the law shows that the legislation was being undermined.

But Belekanyama agreed with Tukula that there is need to review the law to ensure that the existing loopholes are sealed.

“The law has gaps. [The assets office has] powers but we need to make some amendments. We need indicators to track financial transactions. The law should cover the bank statements every year. The law doesn’t specify how such issues such as money should be handled. We have tested that law, some of the provisions will be changed. As a committee, we discovered that apart from financial transactions, other people in government do not declare assets,” said Belekanyama.

Mutharika’s Cabinet first declared assets in July 2014, on assuming office. The President stated that he had more than K1.5 billion in cash held in various bank accounts within Malawi and abroad.

For instance, he said he had over $2 million (about K1.4 billion) in two bank accounts he holds in the United States of America where he spent most of his working life.

In Malawi, Mutharika had about K70 million at Standard Bank and a fleet of nine vehicles which he bought between 2001 and 2014 also valued in millions of kwacha.

Since those initial declarations, there has been murky updates that fail to capture his current financial position. In his latest declarations,  Mutharika did not mention the assets of his wife Gertrude and only declared one car—a used Cadillac Escalade Station Wagon valued at K55 223 599.55.

Chilima also declared, among other assets, two houses both in Lilongwe valued at K51 million, six plots valued at over K15.8 million; four vehicles worth K65 million while his wife had three vehicles valued at K33.2 million.

In his latest declarations, Chilima cites a few loans acquired by his wife Mary from specified sources as the source of some of his wealth.

Further on liabilities and assets, the Vice-President cites two loans-from Office of the President and Cabinet worth K24 million and another of K100 million from investment at Alliance Capital which, he said was used for agricultural commodity trading.

4 ministers had nothing to declare

Four ministers—Joseph Mwanamvekha (Agriculture), Atupele Muluzi (Health), Goodall Gondwe (Finance), simply responded “Not Applicable” on the declaration form, implying they had nothing to declare in the period while the law asks them to declare their income and its source and the status of their bank accounts.

lMinister of Gender and Disability Jean Kalilani declared she bought two plots in Mponela at K10 million and K7 million, a few clothing and suitcase,   processing to sell a 4X4 Nissan and buy a new vehicle, helping needy students with school fees and support items amounting to K750 000 per term and   planning to buy and sell soya.

lHenry Mussa declared massive construction projects in Area 10 in Lilongwe and plots in Mangochi and furniture.

lJappie Mhangodeclared purchasing a Mercedes Benz, Toyota Raum and a Ranger but  did not indicate the cost of each vehicle.

lDeputy Minister Clement Mukumbwa declared awaiting payment of K80 million for Unicef projects in Chitipa and Karonga for constructing pit latrines and K2.5 million from sale of a vehicle.

lAnna Kachikho declared a Toyota Vitz 2006 at K3 million and a Toyota Prado.

There was not much detail from other ministers; some members such as Cecilia Chazama declared registering new companies and two vehicles which she lost in road accidents while Aggrey Massi had nothing to declare.

She said the law complements ACB’s work when the bureau is investigating and prosecuting corrupt practices.

The assets law was designed to curb worsening corruption in government. The Cashgate scandal exposed in 2013 when K24 billion was stolen from government, is an example of how public offices can be used for self-enrichment.