Capitol Hill should straighten out its priorities

The Minister promised to align the national budget with the International Monetary Fund’s (IMF) third iteration of the Extended Credit Facility (ECF) to ensure that Malawi lives within its means as a precursor for future economic growth and stability.

Mwanamvekha said at the time: “The third ECF programme is anchored on government’s commitment to reduce fiscal deficits in the short-term and record surpluses in the medium to long-term that will bring domestic debt on a downward path.”

After the perennial deficits which plagued APM’s first term, Malawians had reason to hope that the President and his DPP-led administration would deliver on their unfulfilled promise to stabilise the economy, reduce deficits and in the long-term, reduce government debt.

The IMF’s reasoning in the ECF programme is very simple; Malawi, with its perennial failure to generate enough revenue for its programmes, should use its available resources as prudently as possible, spend within its means and avoid unnecessary debt.

The over-arching idea was that the available resources should be directed to critical sectors in public service delivery and national investment to promote economic growth and ensure that all sections of the population have access to essential public services.

However, it is disappointing to learn that five months into the financial year, State Residences, which comprise the Office of the President and Cabinet (OPC) and the Office of the Vice-President (OVP), have already spent 70 percent of its allocation.

If the figures compiled by Treasury are anything to go by, it means State Residences are using up on average 14 percent of their annual allocation every month and will exceed their budget allocations by 68 percent by the time the financial year closes in June this year.

That translates to a whopping K5.03 billion this year alone.

In contrast, the Ministry of Agriculture, Irrigation and Water Development, which only got a paltry eight percent of its annual allocation is expected to get a measly 19.2 percent at the end of this financial year.

Folks, if ever there was a case of misplaced priorities, this is it! Seriously, agriculture, which remains the backbone of the national economy and the source of income for over 80 percent of Malawians living in the rural areas gets eight percent when the men in suits and their aides get 70 percent of their allocation?

Does this administration realise that public hospitals across the country do not have enough drugs, nor the personnel to care for the sick? Do they know that while the big bosses at State House and the Vice President’s office were getting more than they were allocated, some teachers and doctors were going months without pay?

Where is the fiscal prudence and inclusive growth that the APM administration promised in the run-up to the May 21 Tripartite Election and re-affirmed during the presentation of the budget in September last year?

To make matters worse, the profligacy at the State Residences is when government has posted deficits in all of the five months under review! In the period under review, government deficits stood at 26 percent.

Surely, if government wants to walk the talk on its ‘fiscal measures’, this alone should have been incentive enough for the ladies and gentlemen at the OPC and OVP to rein in their expenditure.

But, alas, it is still business as usual. It seems our noble leaders do not care that their wastefulness is resulting in corresponding cuts in other budget lines and undermining public service delivery in health and education.

What APM and the technocrats at Capitol Hill should realise is charity begins at home. If they are serious about fiscal discipline, the clean up exercise should start within their offices lest Malawians start thinking they were fed a cheap dose of lip-service by the people they entrusted to lead them out of poverty. 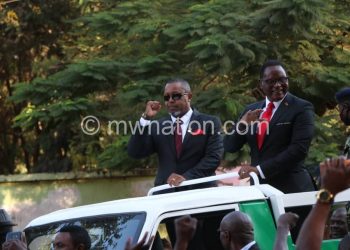