Carbon tax: Why not start with 42 million litres of generator fuel?

Judge Mbadwa: Mr Jonah Kapita of the Association of Disgruntled Consumers has petitioned this court to force the Minister of Finance Yosefe ChildHeard to move to repeal Carbon Tax law that came into force from last Monday. Mr Kapita, since you are representing vehicle owners in this matter, why should this court order ChildHeard to repeal the Carbon Tax?

Kapita: My Lord, the whole motivation behind this law was wrong because in the statement the Honourable minister made in the Nyasaland Parliament, he mentioned that they primarily introduced the carbon tax to expand the tax base and the easiest justification for that decision was the unfounded claim that this was the initial steps, to mitigate effects of climate change; which steps?

My Lord, we don’t believe that this country wants to move to mitigate effects of climate change because there is no clear strategy to do so and we don’t understand why they have targeted poor motorists in the country to widen the tax base.

My Lord, this law is targeting poor motorists most of whom can only afford fuel for a week, especially after receiving their meager salaries; as they resort to commute on minibuses once again for another three weeks.

My lord, I submit that the decision to come up with this carbon tax was ill-advised because we know the biggest guzzlers of fuel are vehicles that form the presidential motorcade, ministerial vehicles and those of senior government officials who are not even responsible for the certificate of fitness of their vehicles nor for the fuel that run them. It is the overtaxed taxpayer that bears the brunt.

Any serious law that would help mitigate effects of climate change would have taken into consideration the emissions from diesel engines that are generating electricity in the country.

My lord, the gen sets run by Electricity Supply Commission of Nyasaland (Escon) alone daily consume about 143 thousand litres of fuel, translating to 42 million litres annually, yet these have been spared, why?

Now if you factored in the fuel Electricity Generation Company of Nyasaland is consuming, one realises that those who can be damaging the environment through fumes are these generators why then should ChildHeard burden somebody who only uses 10 litres per month?

My lord, this carbon tax on the basis outlined is retrogressive and segregative. It was conceived to impoverish the already poor motorists.

You just have to see the need to deposit the collected money into Account Number 1 to understand the insincerity of the whole arrangement.

My lord, aren’t we entitled to also ask what happened to the multi billion kwacha tree-planting project government initiated as some of the steps to address environmental degradation?

I rest my case.

Mbadwa: Mr Kapita has a valid case and this court believes government was not being honest in coming up with the carbon tax. If it wanted to come up with measures to mitigate effects of climate change, it should have outlined ways how money collected from this would have been utilised and a separate account run by ministry of Energy and Mining should have been set with clearly defined goals and projects in the climate change mitigation to easily follow up. The tax should have even considered various areas in the carbon emission circle which are not there. By singling out poor motorists, government is perpetuating poverty of the already heavily taxed people. I, therefore, declare this law sectarian and illegal. n 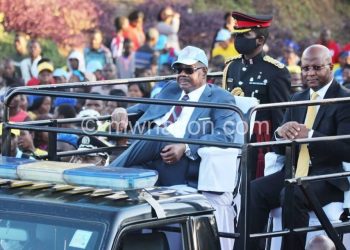