For a long time, 39-year-old Mwanaisha Phiri’s parents worked in the mines in Zimbabwe. She and her three siblings were born in that country.

She comes from Mponda Village, Traditional Authority (T/A) Jalasi in Mangochi, one of the districts in the country renowned for early pregnancies and early marriages. 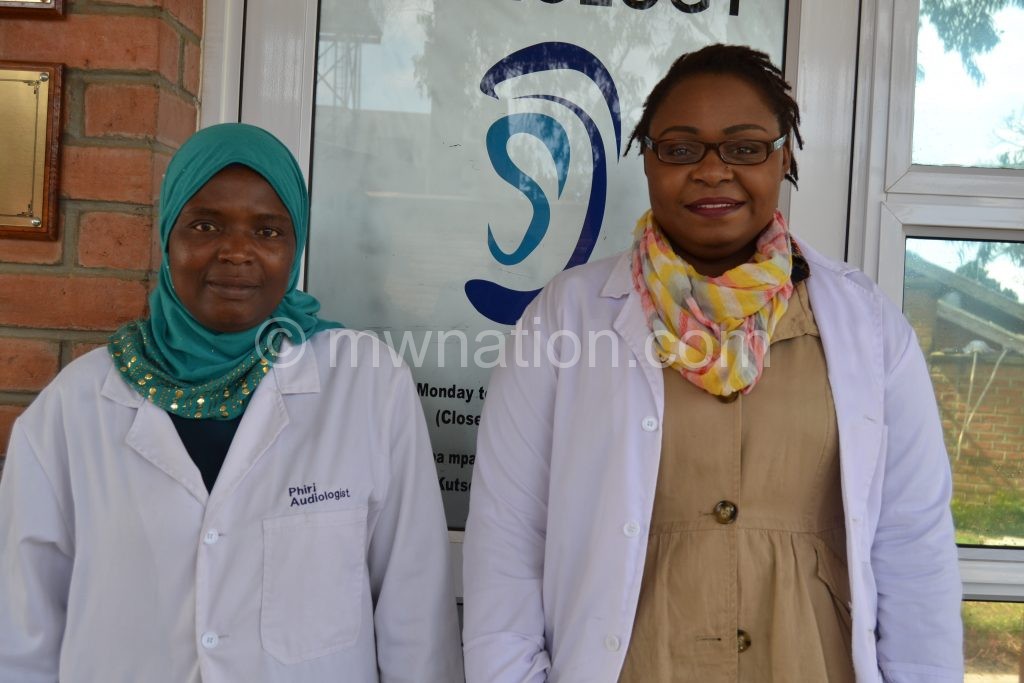 Although her parents were illiterate, they still appreciated the value of education, from seeing how it changed the lives of people around.

“We got back to Malawi—from Zimbabwe—when I was 12, and my parents always encouraged us to go to school. So, although some of my friends withdrew from school and got married, marriage was useless to me because I had seen people become nurses, doctors and teachers because of education,” says Phiri, now a mother of four.

She is one of the two female audiologists in the country, with her colleague Chikondi Chabaluka.

They are healthcare professionals who evaluate hearing losses and related disorders, including balance (vestibular) disorders and tinnitus (ringing in the ears); and rehabilitate individuals with various hearing disorders.

The duo operates from the Audiology Clinic at Qech, catering for people in the Southern Region.

Phiri started off as a nurse at Queen Elizabeth Central Hospital’s (Qech) main operating theatre, after graduating with a Diploma in Nursing and Midwifery at Holy Family College of Nursing in Phalombe in 2007.

She was at the operating theatre for four years, before she was transferred to the out-patient department in the Adult Emergency and Trauma Centre, where she worked for 11 months.

Phiri later got a scholarship to study for a Diploma in Audiology and Public Health Otology at the University of Namibia and graduated in 2013.

She then joined the Ear, Nose and Throat (ENT) Department as audiological officer, handling hearing assessment, and balance assessment.

In 2015, she was offered a scholarship to study for a Master of Audiological Science at the University of Manchester.

Youthful Chabaluka, on the other hand, had her mind set on becoming a lawyer, but she found herself studying mass communications at the African Bible College (ABC) after her secondary school studies at Chichiri in Blantyre.

“I majored in mass communications with a minor in audiology. Audiology was something new at the college, no one really knew anything about it. I was just a student who wanted to know more about the ear,” she explains.

After graduating, she went through a rigorous selection process to become one of the four people to study for a Master of Audiological Science.

This followed the construction of the audiology clinics in Blantyre and Lilongwe which, despite having all the equipment, had no specialists to man them.

Among other things, Phiri and Chabaluka conduct hearing assessments for both children and adults, balance assessments, and offer assistance for hearing impairment. They also conduct outreach programmes in rural areas for various ear services.

Chabaluka observes that most people neglect their ear problems, which makes them worse with time.

“When you experience any problems with the ear, it is important to rush to the hospital. For instance, some people think it is normal to have discharge in their ears, but it is not. And mumps are not normal; they are dangerous and can cause deafness,” Chabaluka advises.

She also warns people against poking ears in the name of cleaning, arguing that the ear is one of the self-cleaning parts of the body.

“Ear wax is important. It traps dust, flies and other foreign bodies and there is no need to remove it. But every week, we get approximately 15 people with problems resulting from poking their ears,” she says.

The specialist also warns against home remedies that are mostly damaging to the ear, including the use of salt water to treat certain ear problems.

“Some people even use soot or vinegar, but all these make the ear problems worse. It is high time people changed their mindset and used hospitals more. Even newborn babies need ear screening. Often, when a child is born, they only look at the outer body parts, but it is important to also check if other vital organs such as ears, if they are working,” she says.

Hearing loss can be caused by different things, including other diseases such as tuberculosis, meningitis, malaria and other ear infections. Some premature babies may also have ear problems.

Since 2014, the Audiological Clinic at Qech has reached out to thousands in the Southern Region and has done 11 cochlea implants for children.

However, from next year, it will introduce such implants in adults as well.

The surgeries are offered to children for free and the adults will pay as a way of fundraising for the children’s treatments.

Both Chabaluka and Phiri say the best part of their job is seeing patients, who previously could not hear, able to hear.

“Communication is vital and everyone needs a good hearing system to perceive sound. I am always happy to see people able to hear after a long time,” says Phiri.

She encourages the youth to work hard in school, especially in science subjects, so, that they can join them in the audiology profession and bring solutions to hearing problems for people in the country.

On her part, Chabaluka calls on younger girls to always chase their dreams, arguing that everything is possible when one sets their mind to it.

“I was supposed to be a journalist, but I got passionate about audiology. It is important to follow your dreams and not to go for what society dictates. Audiology is a difficult course, but I managed. Anyone else can, too,” says the twin who comes from Madzanje Village, Traditional Authority (T/A) Kwataine in Ntcheu.

The two were registered with the Medical Council of Malawi (MCM) in 2016.