UTM Party presidential candidate Saulos Chilima yesterday told Muslims who are observing the month of Ramadhan to use the period to pray for peaceful elections.

His call during a rally held at St Augustine 3 Primary School ground in Mangochi comes at a time when political party followers in the country are vandalising campaign materials for other parties in the run-up to May 21 2019 Tripartite Elections, creating fears among the voters that the election may be marred by violence.

But Chilima, who is the country’s Vice-President, said he is happy the elections coincide with the month of Ramadhan, and urged the Muslims to commit themselves in praying for violence free elections.

“Since we are in Ramadhan, let’s remember to pray for the elections to be free, fair and credible,” said the UTM leader.

Chilima, who dwelt on the UTM manifesto, observed that Mangochi is endowed with a lot of natural resources such as the lake and cultural heritages.

He promised people of the district that once elected as president of this country, his government will change the current status of the district from being a town to a city to attract more tourists who will help improve the country’s economy.

“I will change the face of Mangochi because it has potential to improve Malawi’s economy because of the lake which among other things is the source of fish,” he said.

Chilima also promised to build an airport in Mangochi to reduce unemployment in the district.

To this effect, Chilima encouraged people to go and vote for his party en masse on May 21 to enjoy the development UTM has in store for them.

Speaking earlier, the party’s general secretary Patricia Kaliati said her party is the only hope for Malawians, saying other parties have been looting the countries coffers and do not deserve to be in government. 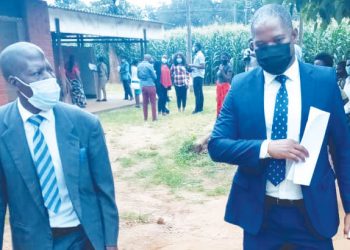