The news that Professor Father John Ryan has been appointed by Pope Francis to be Bishop for the Diocese of Mzuzu cannot go without comment on the Rise and Shine column.

First of all, Father Ryan is a very special man. He came to Malawi in 1978 and has lived here since, and mostly in the remote areas of Malawi, including Mzimba, Chitipa and Rumphi before he relocated to Mzuzu in the late 1990s where he worked as a mathematics lecturer and rising to the rank of Professor.

Secondly, Father Ryan has played a pivotal role in my personal journey and he is behind the whole long story behind my personal development that led to being able to run a column like this

He has been my best teacher, coach and mentor since I first met him as my Mathematics, Additional Mathematics and Physical Science teacher at St. Patrick’s Seminary in Rumphi, in Form Two around 1994.

Father Ryan was not just a typical teacher. For the five years that he taught at the seminary, no one ever failed mathematics at Junior Certificate as well as at Malawi School Leaving Certificate of Education (MSCE) levels. In fact, in our class, nearly half the class had distinctions in mathematics. This did not come up by chance. Father Ryan would give us weekly Maths tests on Thursday night and he would mark on Friday and give us back Saturday and we would revise with him on Monday as we looked to another weekly paper three days later on Thursday.

At a personal level, without Father Ryan, I would have not won the two major national awards in Mathematics and Science-which boosted my personal confidence and gave me the foundation that made me go very far academically once I went to tertiary education. Many friends have similar testimonies about Father Ryan.

Many of the friends that were taught by and have interacted greatly with him are not surprised with the news—and it is the same with me. I am not surprised at all to see this special man appointed to the high office of Bishop. Father Ryan is a very humble man. He is compassionate and reaches out to people in need and where able to, he stretches himself to help as many as he can. He is a hard worker. He is always initiating ideas and following through until they germinate and grow into big and impactful projects.

When he was hired at Mzuzu University (Mzuni)—where actually he was the first person to be signed up as lecturer by the founding Vice-Chancellor Professor Davis, Father Ryan had a big vision for Mathematics at Mzuni. He quickly grew mathematics into a great department and within few years, they started offering a Masters programme and later even a PhD programme in mathematics! In both cases, Mzuni was the first institution to do this in Mathematics in Malawi.

Father Ryan is also very active in the larger community. He previously served as chairperson of the board for Tovwirane, a local non-governmental organisation (NGO) which offers HIV and Aids prevention, advocacy, quality care and support services, including livelihoods, health and education to the community, those infected and affected by HIV and Aids in Mzimba with love, accountability and professionalism.

Currently, he is a member of the board of directors for Mzuzu Academy. In 2004, Father Ryan founded a community-based organisation (CBO) called Ungweru, which is a Tumbuka word meaning light. Over the years, Ungweru CBO has grown significantly. Ungweru’s roots in missionary work bring about the belief that faith, spirituality and development not only complement each other but further enrich one another. Ungweru touches many lives in and around Mzuzu.

Ungweru CBO works with the surrounding communities to improve the lives of its members in the areas of child protection, food security, HIV and Aids management, water and sanitation.

Clearly, this is a man who spends his time worthwhile. He has impacted many of us very positively. Making him Bishop only helps expand the possibilities of what he can do and amplifies the impact of his generosity, compassion, love and care. Congratulations to Professor Father John Ryan! n 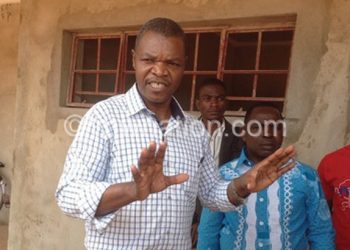 Do you embrace change?