by Albert Sharra
in Front Page, Weekend Investigate
7 min read
0
Share on FacebookShare on TwitterShare on WhatsAppShare on LinkedinLinkedinShare via Email

In this second part of the series, ALBERT SHARRA looks at how students and schools serving students living over 20 kilometres (km) away from school are coping with the situation. He writes:

On a school day, a sight of bicycles parked under a tree at Muloza Community Day Secondary School (CDSS) in Mulanje, tells a story of students’ struggles to  remain in school. 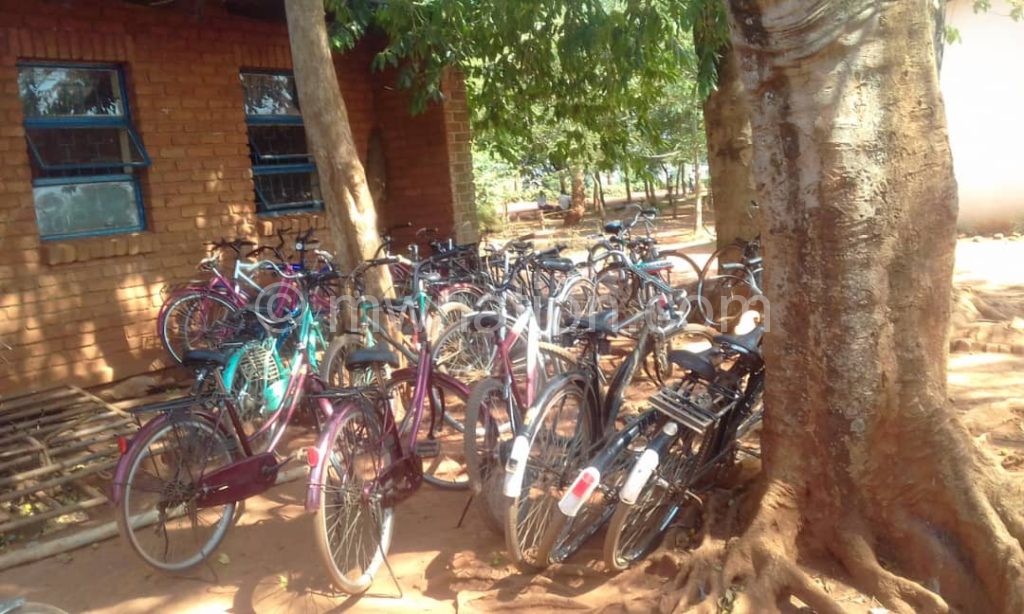 The bicycles are part of the modalities that many students, particularly those in CDSS have adopted to cope with distance to school.

Coupled with lack of space in conventional secondary schools government abolished Malawi College of Distance Education (MCDE) centres, which were put in place to help students who did not make it to secondary school to study by distance learning in 1999. The MCDEs were converted to Community Day Secondary Schools (CDSS).

Civil Society Education Coalition (Csec) executive director Benedicto Kondowe says the concept got a resolute nod because it was addressing a critical issue that was pushing students out of school. The plan was to reduce the distance students walk to access secondary education to a maximum of eight km. Sadly, 19 years down the line, students still walk over 20km to access a secondary school.

At Muloza CDSS, Clement Majawa, the school’s head teacher says more than half of students walk over the recommended eight kilometres to access the school. The story cuts across Malawi. Our spot check in Chitipa, Mzimba, Ntcheu, Thyolo and Mulanje districts reveals that majority of students walk an average of 15km to access a CDSS. The investigations also show that the distance to school is among the key reasons contributing to high school dropouts in CDSS. 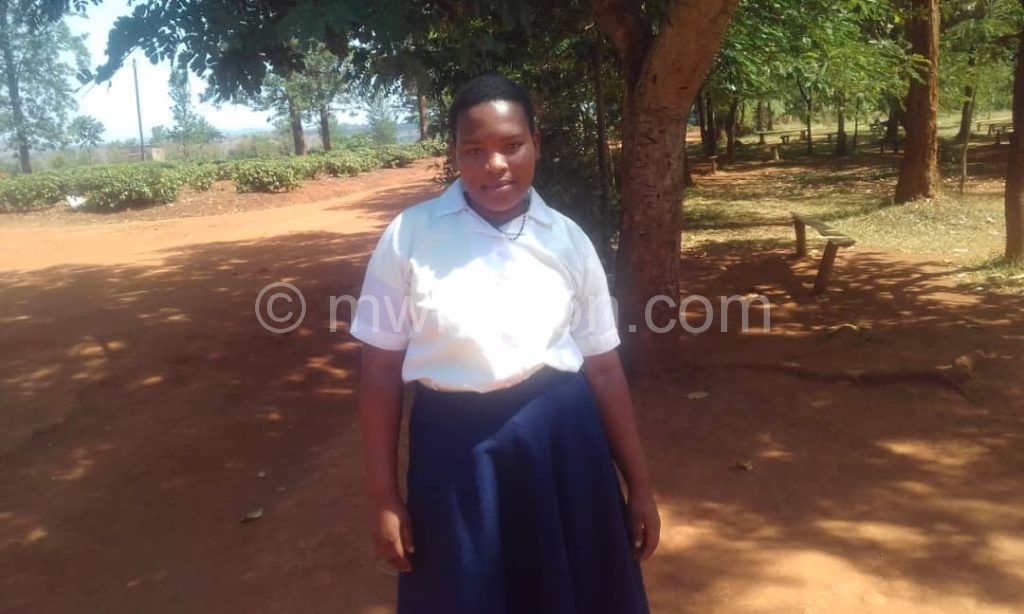 At the time education has become a pillar for everyone’s success, the world has placed emphasis on access to quality education. Both Agenda 2063 and Sustainable Development Goals (SDGs), particularly goal number four, task countries to ensure there is access to inclusive and equitable quality education and  lifelong learning opportunities.  In Malawi, access to education is frustrated by distance to schools, particularly CDSS.

Early in the morning and late afternoon, a sight of boys and girls cycling to and from school, depicts the coping measures that students and parents have adopted to keep students in school.

But it is never easy. In Maliya, a community in Blantyre rural West, Mphatso Matabwa, a Form Four student at Lumbira CDSS, cycles 34 kms to and from school.

“I usually walk the distance, but sometimes my uncle lets me use his bicycle,” he explains. “However, because of the hilly topography, I ride the bicycle on return.”

His home is situated down the steep escarpment. The road cuts across hills which makes it hard to cycle up the hill to Lumbira.

There is a Maliya CDSS in their area, but it is a junior secondary school. Form Three students are transferred to Lumbira. However, because of distance they hardly survive two years in school.

For instance in 2017, of the four students transferred to Lumbira, only two are school. Data at Lumbira shows that less than half of the transferred students drop out in their first year due to distance.

In Mulanje, cycling from Safari Village, Traditional Authority (T/A) Njema to Muloza CDSS, a distance of about 20km has forced many students out of school.

“I remember last time, our school failed to get three girls from Safari because of distance. It is too far for students to even cycle,” says Majawa.

Worse still, a bicycle is a highly valued property in Malawi and most families cannot afford it. During our recent visit to Limbuli Trading Centre (LTC), a brand new bicycle was selling at around K50 000.

A World Bank report indicates that majority of rural Malawians live on less than $1.20 (K876) a day. Thus, owning a bicycle remains a far-fetched dream to many.

The 2008 Population and Housing Census (PHC) report indicates that only 45 percent of the population in Malawi owns a bicycle. The growth rate has been on a snail’s pace. In 1998, PHC says the rate was at 40.7 percent. The 2018 Human Development Index says poverty is worsening and this promises a slight increase in the number of people owning a bicycle in the 2018 PHC.

Inability to own a bicycle leaves students living too far from schools with three options—to walk, hire a bicycle taxi or be in boarding.

Cecilia Baluwa, a Form One student at Muloza walks 20kms one way to school. She says a bicycle taxi costs K1 500 and she needs K3 000 to and from school every day. The sum is almost triple what the World Bank says a poor family in Malawi requires in a day.

She says a bicycle can be a relief. Many institutions, including world celebrities, such as musician Rihanna, have proritised donating bicycles to girls living too far from school.

However, our investigations found that most families struggle to keep them on the road. Once they breakdown, there is no one to fix them. Some families use the bicycles for family purposes which quickly leaves them grounded. Most girls also find it hard to cycle over 40 kms to and from school. This simply means, while a bicycle is a relief to some, it is not a solution to other students leaving too far from school.

Chrissie Chikopa, a Form Four student at Vonken CDSS in Mulanje comes from Mpala. She says if it were not for the boarding facilities at her school, she could not have been in school. She says it takes two hours to connect.

They pay K50 000 to be in the girls’ hostel. Those who cannot afford stay in self-boarding.

At Muloza, overwhelmed by high school dropout rates due to long distances to school, the institution constructed a girls’ hostel which currently hosts 36 students. Students are given mattresses. Nothing more.

The hostel prefect, Delicious Moses, says the facility is a relief.

“Boys are not allowed in our hostels. After 10pm no one is allowed to go out,” she says.

However, the school’s quest to offer quality accommodation is haunted by lack of funds. The hostels are congested. Each room accommodates eight girls. There are no beds and the mattresses are too thin to protect the students from the cold floor.

The congestion risks the students to airborne diseases. During our visit, we found three girls bed-ridden. There is no potable water and the girls rely on a shared borehole.

“We waste time looking for water at boreholes,” says Delicious.

At Vonken, apart from absence of tap water, Chrissie says they use solar power for lighting and is unreliable when the weather goes bad.

Majawa says they want to improve the hostel conditions, but finances are letting them down. Vonken CDSS headmistress Catherine Supedi-Chilombo reveals that their efforts to sink a borehole have failed for many years because of funds.

Despite government banning self-boarding in 2014, our investigations show many students are in rented houses near schools. The ban on self-boarding followed reports of rape cases at Namikasi CDSS in Blantyre.

Life in rented hostels is about survival of the fittest. We visited one of the hostels at LTC, about 200 metres away from Muloza CDSS. The four-roomed house accommodates six girls.

The landlady, Annie Morola, says it is a no-go zone for boys.

“I felt embarrassed when two of the five girls I accommodated in 2016 became pregnant. I am a mother and I know how it feels to see a child falling pregnant while in your custody,” says Morola.

A stone throw away is another rented apartment. The landlords do not live there. Here, life is what you make.

There are seven students. Two boys share a room and two rooms are used by girls. There is one bathroom, a toilet, kitchen and no tap water. The rent is K28 000 and each contributes K4 000 per month. On top of that, each student spends K800 for utilities. Water is sourced at a nearby borehole.

In a month each student gets about K1 000 from guardians.

“Our bills surpass what we get from parents, but we know the poverty in our homes. So, it is about coping with what you have, but it is hard when you are in a group because you are expected to contribute equally,” says one student, who did not want to be named.

She reveals that most of her friends complement their purse with boyfriends, particularly those working at Limbuli Tea Estate. During weekends, she says, most girls spend nights away.

“We were eight and our friend dropped out due to pregnancy. The man, a labourer at Limbuli Tea Estate, denied responsibility because he is married,” explains the student.

The revelations are not new. A 2014 Kalondolondo assessment on self-boarding involving 135 schools in nine districts exposed vulnerability of girls to libidinous men. Apart from insecurity, students, particularly girls opt for extra sources of money and they indulge in immoral activities such as dating older men.

Evidently, Malawi seems to have no answers to addressing problems faced by students living more than eight km from schools. The idea to increase the number of schools is on a snail’s pace. For instance, between 2014 and 2018, only 173 secondary schools have been built against 41 235 new students.

Use of bicycles to school is not a complete solution. Some schools have attempted boarding service, but it is too little to bring a smile. The third option of self-boarding has only worsened the vulnerability of students. The situation casts doubts that Malawi is committed to achieve SDG goal 4 on education.