The High Court in Malawi’s capital, Lilongwe, on Monday cleared Nkhata Bay Central Member of Parliament Symon Vuwa Kaunda of wrong doing and ordered the Malawi Police Service (MPS) to instantly release and let him proceed with his business trip to Brussels, Belgium.

Health workers not spared by Covid-19

Vuwa Kaunda, who is currently on court bail alongside 10 others after being charged with treason, was re-arrested on Saturday night at Kamuzu International Airport (KIA) in Lilongwe as he was about to board a plane en route for Brussels. He is expected to attend the African, Caribbean and Pacific (ACP)-European Union (EU) Parliamentary Assembly in Brussels.

Police claimed the legislator had violated one of his bail conditions, that is, informing the regional commissioner of police before leaving Malawi.

But it transpired later that the MP had sought clearance from the High Court before embarking on his trip which was already being processed before his arrest last week on Monday.

“The court said this morning that the arrest was unlawful because I had a court order with me which the Airport Police who arrested me disobeyed,” said Vuwa Kaunda in a telephone interview from Lubumbashi in the Democratic Republic of Congo (DRC) where he was in transit en route to Addis Ababa, Ethiopia on his way to Europe.

In an interview later, Malawi National Assembly spokesperson Leonard Mengezi, whose institution released allowances for the trip, said the money for the trip was given to Vuwa Kaunda after he presented a letter from the High Court’s Lilongwe Registry clearing him to travel.

National Police Headquarters spokesperson Rhoda Manjolo, who on Sunday said the police arrested Vuwa Kaunda because he violated one of the bail conditions, on Monday could not take any questions on the issue.

Lilongwe High Court Registrar Vikochi Ndovie also declined to comment on the matter and advised that a questionnaire be sent to the Registrar of the High Court of Malawi and Malawi Supreme Court of Appeal Mike Tembo in Blantyre.

The suspects were granted bail after paying a K250 000 bond each and presenting two sureties with K7 million non-cash bond each.

The judge also ordered that all the accused should surrender all their travel documents to the police until the conclusion of the case and that they shall not leave their area of residence without the permission of the police. 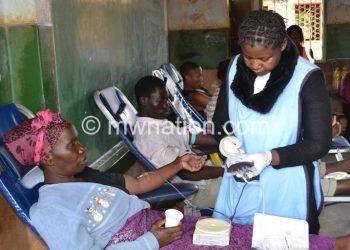 Health workers not spared by Covid-19