A stress test by the Reserve Bank of Malawi (RBM) on the country’s nine commercial banks has found that they are vulnerable to credit, liquidity, interest rate and income risks.

In its latest Financial Stability Report, the central bank said the pre-shock positions for capital and liquidity, though fairly adequate, poses supervisory concern. 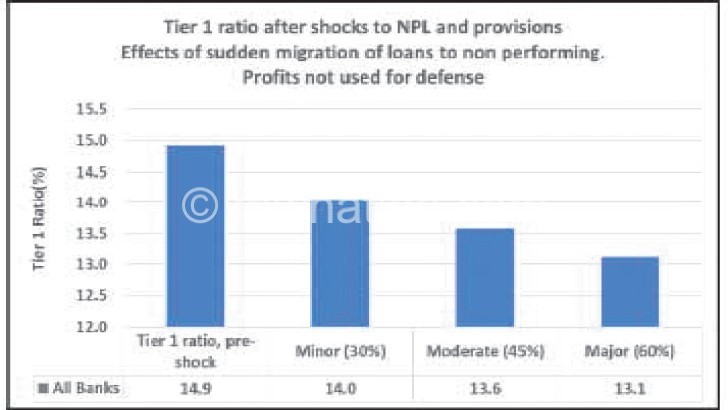 The results, which are based on an analysis on the macroeconomic and financial sector developments and risks for the period between January and June 2018, show that in the credit risk scenario, the industry revealed some resilience to minor sectoral shocks, with Tier One capital ratio—the ratio of a bank’s core equity capital to its total risk weighted assets—falling to 11.1 percent, but deteriorating to 9.1 and 6.3 percent after a moderate and major shock, respectively.

RBM said this was below the regulatory benchmark and was due to high shocks applied to agriculture, manufacturing and wholesale sectors, which constituted the largest proportion of loans industry-wide.

Reads the report in part: “An assessment of the stress test results for individual banks revealed that three out of the nine banks reported core capital ratios below the regulatory benchmark after a minor shock. However five

banks after a moderate shock and seven banks after a major shock was applied. Two banks remained resilient to all the shocks as the Tier One capital ratios remained above regulatory minimum.”

However, the report said the banking sector was resilient to sudden increase in existing non-performing loans (NPLs) levels as Tier One ratio at 13.1 percent remained above the regulatory minimum after a major shock.

The report said only one bank was adversely impacted by the shock with Tier One ratio falling to 8.4 percent after a minor shock was applied.

This was largely due to the already high levels of NPLs in the bank, such that any slight increase has a negative impact on the bank’s Tier One ratio.

In the foreword to the report, RBM Governor Dalitso Kabambe said the country’s financial system remained stable and resilient to domestic and external shocks during the review period.

“Financial stability risks are expected to be broadly balanced in the short-term as financial conditions remain accommodative and supportive of global economic growth,” he said.

Bankers Association of Malawi (BAM) president Paul Guta said earlier there is need to improve the availability of power to boost economic performance.

He said as long as power blackouts continue, productivity issues will still arise and this will trickle down to banks’ performance.

Malawi has been experiencing intermittent power supply due to low water levels in Shire River, the main source of hydro power generation in the country.