What started as a dream of making it to the Under-20 Niger Afcon final ended in a nightmare as Malawi Under-20 national football team’s lost 0-2 to South Africa’s Amajita on Saturday at Bingu National Stadium.

A goal in each half from Platinum Stars midfielder Kobamelo Kodisang and Orlando Pirates striker Thabiso Monyane was enough for Amajita to punch a ticket to Niger final next year. 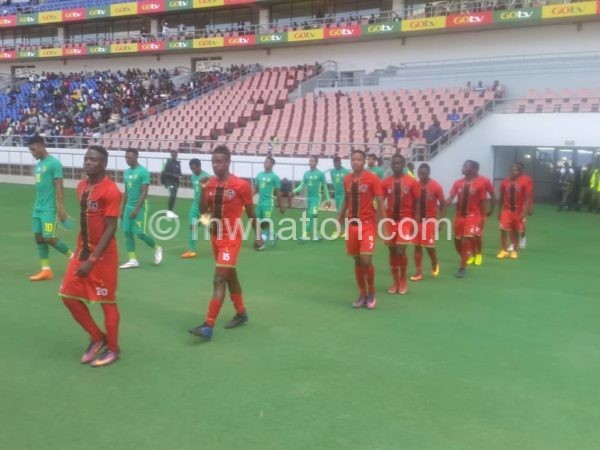 After a goalless draw in the first leg at Moruleng Stadium in South Africa last week, the junior Flames knew they needed to avoid conceding at all cost in the second leg.

But Malawi, who started the match on the back foot, let their guard down and allowed Amajita to take a lead in the 14th minute when Kodisang got on the end of a cross from Thabiso Monyane beating Malawi goalkeeper Charles Thom.

Star striker Peter Banda almost levelled in the 20th minute with a rocket shot, but he was denied by the near post.

Though Malawi continued piling pressure on Amajita, the disciplined visitors did well to hold their defensive line spearheaded by Keenan Abrahams and Givemore Khupe as the first-half ended 1-0.

After recess, Amajita went on in search for a second goal, but Nkosingiphile Ngcobo’s surging pass into the 18-yard in search for Forster, was cleared by Malawi defence.

In 55th minute, Malawi wasted a good chance when Banda was again denied by Amajita goalkeeper Khulekani Kubheka from a weak free-kick.

As the match wore on, frustration started creeping in for the junior Flames.

The visitors sealed the victory in the 84th minute, this time Monyane drove home a pass from Ngcobo inside the 18-yard box.

Flames coach Meke Mwase said he was disappointed that they had failed to qualify.

“Lack of concentration and some missed scoring chances were the cause of our downfall.  But I thank the boys for getting this far,” he said.

“It feels good to go through.  But honestly, I didn’t expect we could record such a comfortable victory,” he said.