Honourable Folks, JB is doing a fine job, but the one area in governance which must be tackled in earnest is corruption; corruption in high places, to be precise.

JB alluded to this kind of corruption in high places in her State-of-the-Nation Address at the opening of the 2012/13 budget session of Parliament.

She shared her dream of Malawi becoming a land of equal opportunities in which jobs and business contracts with government are on merit and not because of having connection to those in power.

In that dream, JB had it all. The rot that makes Malawi keep on moving in a cycle of poverty, while a third of government revenue goes to waste every year, is that kind of corruption.

The Muluzi administration, which heralded the multiparty era, may be given credit for establishing the Anti-Corruption Bureau to fight corruption but it also nurtured the culture of corruption in high places which the Mutharika administration inherited and perfected.

It is corruption in high places when a State president or any official in the public service gives, or influences the giving of jobs or business opportunities in the public sector as a favour to anyone.

Yet, it is common knowledge that people have been given jobs in parastatal organisations or government ministries as a reward for their political loyalty or for belonging to the same tribe with the president.

Unscrupulous businesspeople in our midst know if you boot-lick the president, you can become a multi-millionaire within a single term of office.Â

Often these people answer to nobody and deliver substandard goods and services at highly inflated prices. Those who get jobs as a favour know their tenure is secure even if they donâ€™t perform as long as they remain loyal to the boss.

I believe this kind of corruption is the underlying factor behind the underperformance of parastatals. Why on earth should a water board, enjoying a monopoly in selling water which none of us can do without, fail to meet demand and keep on posting losses while increasing tariffs all the time?

When Central Medical Stores throw away drugs worth over a billion kwacha, is it all due to incompetence of its staff or could it be that some well-connected supplier sourced drugs which were about to expire and dumped them on the institution which ended up paying for them and then throwing them away while our people are dying needlessly in hospitals?

Madam JB, corruption is real in Malawi and we can all benefit by turning into action your dream to eliminate corruption in high places.

For a long time, government has in vain tried to deny uncomplimentary reports, issued by reputable international organisations, of perceived high levels of corruption in Malawi. Verbal refutals serve no meaningful purpose to a potential investor or tourists thinking about where in southern Africa to invest or visit.

Perceptions of poverty can change if people see government fighting corruption with more action than words. We have the JB administration in office now, but as time passes by, tongues are wagging, wondering when the President, her Cabinet and all the new brooms she has put at the helm of various departments and public institutions will declare their assets and liabilities?

JB should not just encourage the declaration of assets and liabilities; her government would make a tremendous difference by quickly enacting a law to give teeth to the asset declaration provision of the Constitution.

Related to this law is the Access to Information Act. All along, a Cabinet and MPs have developed cold feet on this law, fearing it will give journalists too much power.Â  The fact is that such a law is as much an empowering tool for citizen players in the decentralisation process as it is for journalists.

Where people can access public information, they can use it to track progress of development projects in their areas and how money is being used in such projects. After all, the people are the ultimate stakeholders in democracy and public officials serve on trust. Why in the name of transparency and accountability, must the people be denied their own information? 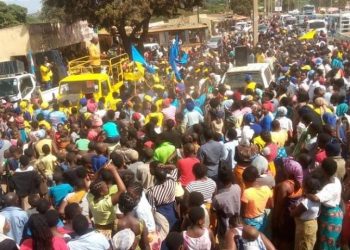