The Reserve Bank of Malawi (RBM) says political uncertainty in the run-up to the May 21 Tripartite Elections coupled with seasonal economic activity slow-down suppressed credit to the private sector in March.

In its Monthly Economic Review for March 2019, the central bank said during the review month, the banking system’s outstanding claims on the private sector declined by K453.9 million to K442.6 billion while loan repayments by commercial and industrial sector amounted to K10.6 billion. 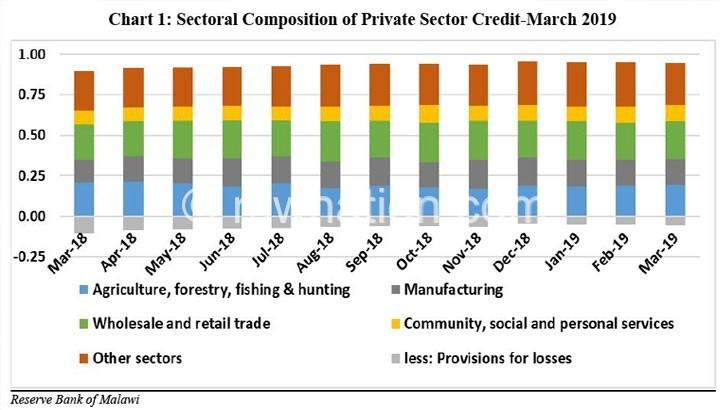 This reduced the stock of credit to the private sector to K162.2 billion as at the end of March 2019.

Analysts say the suppressed credit to the private sector could be as a result of commercial banks taking a wait-and-see mode as elections approach, which could potentially result in the change of government or maintaining the status quo.

In terms of economic sectors, RBM said the decline in stock of private sector credit was mainly on account of a net repayment amounting to K10.8 billion in the electricity, gas, water and energy sectors.

Reads the report in part: “The distribution of the outstanding stock of private sector credit across the economic sectors remained generally unchanged.

“At 26.1 percent, wholesale and retail trade sector accounted for the largest share of the outstanding stock of total private sector credit, followed by the agriculture sector at 21.5 percent, manufacturing sector at 17.9 percent; and community, social and personal services sector at 11.3 percent.”

Market analyst Armstrong Kamphoni, who is also chief executive officer of Cedar Capital Limited, said the credit spread gives direction as to where the economy should go.

He said while the trend could signify demand for outstanding sectors, it could also mean that due to their risk averse, banks are shunning them.

“This tells the story of where the country is and where the country needs to go economically. It means there is demand for retail, which means most of our entrepreneurs in the country are into trading and this might involve, to a larger extent, importing of commodities. But we need to be moving to areas like agro-processing and manufacturing.”

Kamphoni said this could also mean that banks are not comfortable lending to some sectors, adding that there is more demand by retail and banks are more comfortable with the retail sector.

Malawi Confederation of Chambers of Commerce and Industry (MCCCI) has a number of times cited lack of finance as one of the major obstacles to doing business in Malawi.