With a month to go before the new minimum wage rolls out, labour-intensive sectors will be the worst hit by the jump, Employers Consultative Association of Malawi (Ecam) has said.

Ecam executive director George Khakhi said in an interview that once the new minimum wage comes into effect in January, only a sustained enabling business environment could help labour-intensive sectors whose profit margins are low.

He said the situation could have been saved if their request for the new minimum wage not to be applied retrospectively was considered.

Said Khaki: “We lobbied that the new minimum wage should not be applied retrospectively. However, we would urge the powers that be to ensure that there is an enabling environment for business sustainability especially micro, small and medium enterprises.

“In financial services, for example, the impact will be minimal on their income statements. But in agriculture, security, retail and manufacturing where production is labour-intensive and profit margins are low, a lot of juggling around with expenses will have to be done. The wage increase is also likely to be passed to consumers.”

According to the Employment (Minimum Wages) (Amendment) Order of 2019 signed by Minister of Labour, Skills and Innovation Martha Lunji Chanjo, the new minimum wage shall come into operation on January 1 2020.

Last month, Treasury announced an increment in the minimum wage from K25 012 per month to K35 000, three years after government last increased the minimum wage by 24 percent from K19 000 to K25 000 a month, a development which was contrary to Malawi Congress of Trade Unions (MCTU) proposal of 58 percent (K33 000) wage hike.

However, the country has been entangled in political impasse arising from the May 21 Tripartite Elections whose results management is being contested the Constitutional Court.

Besides the court case, Human Rights Defenders Coalition (HRDC) has been holding a series of demonstrations to push for the resignation of Malawi Electoral Commission (MEC) chairperson Jane Ansah and her commissioners for allegedly presiding over a flawed electoral process.

The protests have grounded business in the country’s major cities, posing fear and uncertainty every time demonstrations are held.

Treasury also admits that the current political tension coupled with mass demonstrations have had a sting on businesses which has affected revenue collection by government, as evidenced from continued fiscal deficits in the 2019/20 financial year.

MCTU president Luther Mambala said the union wished employees started reaping from the new minimum wage now although the new wage is not what they desired.

He said: “MCTU are engaging the authorities to effect the minimum wage now other than January next year for the sake of those already lowly paid employees. But still, MCTU has engaged some higher authority to address this issue as soon as possible.” 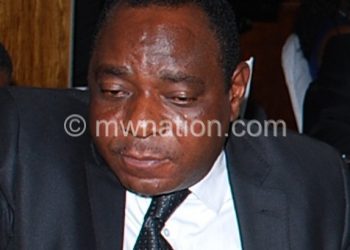