I brought you together so that you know each other. You are all siblings in the esteemed Democratic Progressive Party family. I know each one of you wants to be where I’m sitting. But there is no vacancy until 2023 as I’m still in charge. So, don’t fight each other. But go and campaign peacefully.

This is how I understood the gist of the message from the meeting former president Peter Mutharika had with the six DPP presidential hopefuls and their supporters over the weekend.

The hopefuls are all men, and all but one from the same region. But we can talk about that on another day. They are former Reserve Bank governor Dalitso Kabambe, Machinga Likwenu member for Parliament (MP) and Eastern Region vice-president Bright Msaka. Others are Evangelical Church overseer Prophet David Mbewe, Mulanje Central MP and vice-president for the South Kondwani Nankhumwa, Chiradzulu Central MP and former minister of Finance Joseph Mwanamvekha and economist and businessman Paul Gadama.

Bringing all of them and meeting them together at one place was perhaps the best thing that ever happened to DPP since the party was ousted from power in June last year. Against the barrage of criticism Mutharika has received for failing to seal the cracks in the party since he left State House, the meeting held at his Blantyre residence was long overdue.

Mutharika met the six presidential aspirants after two politicians, former president Bakili Muluzi and former minister of Justice and Constitutional Affairs Samuel Tembenu and many others had spoken out against the chaos in the party. Speaking at different occasions Muluzi and Tembenu told Mutharika in no uncertain terms about the need to salvage the party and urgently end the rivalry and divisions rocking it which were killing the once mighty party under his watch.

So when it came, the meeting was a breath of fresh air among the party’s rank and file divided by the jostling for power by the various factions in the party.

So much did Mutharika discuss with his party lieutenants and much more must have been on the agenda. But as the six presidential hopefuls left the meeting, there was one item each one of them must have taken with a pinch of salt. This is the message to them that they should forthwith stop campaigning until the party announces the date of the convention.

This message was, to say the least, unrealistic and it is foolhardy for anyone with a strong ambition to become the party’s next president to take seriously.

Meeting all the candidates together was strategic. Apart from showing transparency, Mutharika presented himself as someone who had no preferred candidate or that he was not going to favour anyone on the road to 2023, when the party will hold the elective convention.

Bringing them together also provided the aspirants an opportunity to interact and begin to see each other not as enemies but as children of one party in a race towards finding the best and strongest amongst them to replace the party’s top leadership. The move also set the stage for fair play and levelling of the playing field during the period leading to the elective convention, which is usually characterised by a lot of schisms and anarchy.

But it was unrealistic to expect anyone of the aspirants to abandon campaigning after they have already invested so much in the exercise. I can guarantee that no serious presidential hopeful will stop campaigning. It will also be foolhardy for anyone of them to sit back and wait for the secretariat to announce the date of the convention for them to commence their campaigns.

It is no brainer that Mutharika like any political leader has a preferred candidate for the position he is vacating in 2023. He will therefore use every trick in the book to frustrate other candidates. And one thing he will surely do is to keep the date of the convention close to his chest until very close to the event aimed at ensuring his preferred choice has a clear advantage over the others.

Fortunately all the other candidates who have been building their bases and teams for 2023 know this trick and will not play ball. They all went home with renewed resolve to do more of the same. What will, however, change now is the manner of reaching out to their support bases. The campaign will now be more discreet and less ostentatious. It will be more underground and may be equally divisive.

Bottom line is that the move already gives aspirants with structures among the potential voters as well as support from the party’s leadership, a big advantage over the others.

It is, therefore, game on. 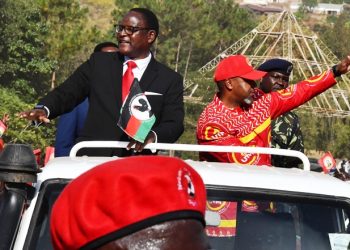