Giving the girl-child a voice

It is a sunny Thursday, October 11 this year. It is an ordinary day for everyone else, except schoolgirls in the northern part of Kasungu District.

Their joyful faces mirror their hope for a bright future. But the messages on the placards they are carrying portray a bad world in which they live. 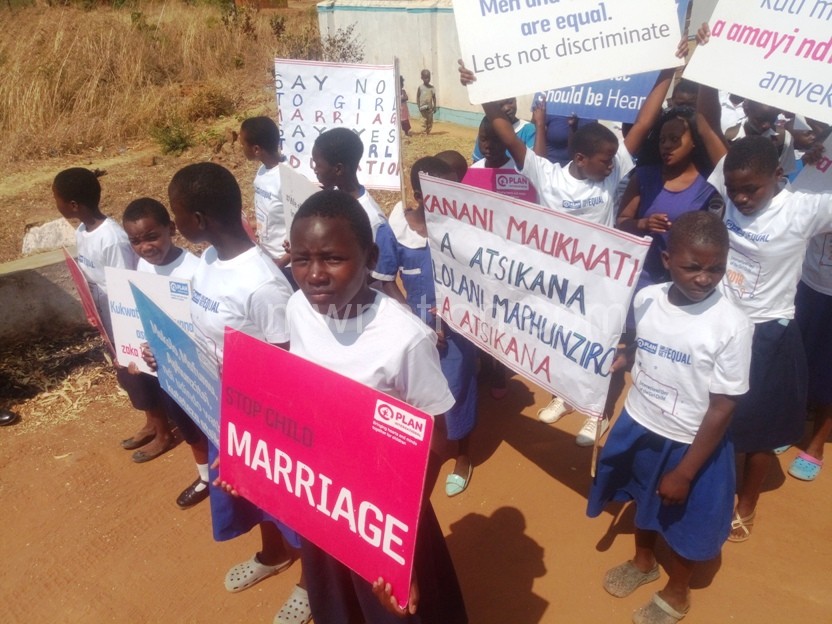 They are marching, dancing and hoisting placards that call for an end to child marriages, which affect half of girls in Malawi.

Drawn from different schools, the girls are marching to commemorate the International Day of the Girl Child (IDGC) set aside by the United Nations (UN) in 2011 to highlight and address the needs and challenges of girls.

Ironically, as they march past Nkhamenya Trading Centre on the Kasungu-Mzuzu M1 Road, their placards indicate that all is not rosy.

Among the schoolgirls is Dalitso Mondoma, 17, who gives a glimpse of the hardships faced by girls.

“Girls face many problems such as lack of school fees, sexual abuses, defilement and forced marriage. These problems make it hard for us to continue with our education,” says the Form Four student at Kanjaluni Community Day Secondary School (CDSS).

Dalitso said the marching girls’ excitement does not mean that they are amused. Rather, the day offers them a platform to send a strong message to leaders, guardians, parents and duty bearers that “we need to be protected,” she says.

“This is a day to voice out our challenges. Our message is that we have a future; so, please, protect us and let us finish our education,” says Cleverness Chitekwere, from Kanjaluni CDSS.

The UN theme for this year is With Her: A Skilled Girl Force. It reflects efforts to bring together all partners to advocate for and draw attention and investments to the most pressing needs and opportunities for girls to attain skills for employability.

However, for school children in Kasungu north, Plan Malawi, which is sponsoring the march, has a different theme—Say No To Child Marriage, Say Yes To Education—which highlights the need to empower a girl child to withstand everyday inequalities.

Plan works to end all forms of child rights violations and injustices that affect girls disproportionately. The organisation wants to reach out to 100 million girls globally.

Most placards denounce sexual exploitation and inequalities in education, gender and health. Such abuses compel girls to drop out of school due to early pregnancies and child marriages. Widespread poverty forces some parents to marry off their daughters. Some girls marry young because their parents view them as lesser beings than boys.

Is the battle against early marriage being won?

Senior Chief Kaluluma believes that in communities where child rights messages have been spread, there is some appreciable progress towards ending early marriages and ensuring every girl learns.

“The most important thing is that the messages should go straight to communities. But currently, most awareness meetings are held with chiefs only. Some spread the messages while others don’t,” says the traditional leader.

Although some cultural forces increase the likelihood of girls marrying before their 18th birthday, government has put in place measures to protect the children.

Recently, Parliament amended the Constitution to outlaw marriages involving girls below 18. However, implementation of the Marriage Act has been sloppy as some families and community leaders hide child marriages.

But he is worried that most change agents are concentrated in Senior Chief Kaluluma, leaving other areas without child protection messages.

“Most child protection officers have not undergone training to build their capacity. They may not be able to apply the laws properly,” he says.

Plan Malawi country director Daniel Muchena commends the ongoing efforts in protecting girls’ rights. To him, there is low understanding and enforcement of existing child protection laws in many communities.

“There is need for more engagement with local authorities, parents and the girls themselves to understand girls’ rights so that when there is an infringement, the cases must be reported and perpetrators dealt with,” Muchena says.

While the Girl Child Day gives girls an opportunity to tell the world challenges that get in the way of their freedoms, growth, wellbeing and potential,  it is up to parents, community leaders and duty bearers to listen to these concerns and take necessary steps to make the world a better place for girls like Dalitso.