Treasury has borrowed about K143.06 billion against projected K176.08 billion through Treasury bills (T-bills) in the first quarter  (July-August) of this fiscal year, figures from the Reserve Bank of Malawi (RBM) show.

T-bills are one of the ways through which government raises money without raising taxes. 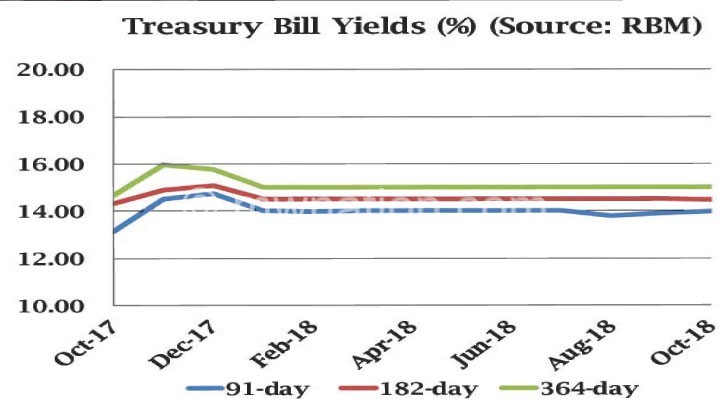 But Economics Association of Malawi (Ecama) president Chikumbutso Kalilombe yesterday cautioned against government’s borrowing through T-bills, saying there is need to understand why government has taken this route.

He said: “That is why we would want to understand the causative. Why are they floating high requests for people to invest in T-bills? Could it be that they are using the same to mop up liquidity as a monetary policy tool. When they get low subscriptions, the same could  reflect level of liquidity in the market.

“We need to, therefore, carefully understand if this is being used either as a mopping tool or part of government [domestic] borrowing.”

On his part, dean of Faculty of Social Sciences at Catholic University Gilbert Kachamba said depending on what government wants to achieve, the move could have an impact on the economy.

“This does not portray a good macroeconomic environment,” he said.

Government’s move to issue treasury securities is regarded as a stepping stone towards easing huge public debt, currently at around K3 trillion.

Over the years, the country’s gross domestic debt has increased largely due to huge budget deficits which compel government to borrow on the domestic market to finance the gap.

In the 2018/19 financial year, fiscal deficit is expected to worsen further from the earlier projected amount ofK242 billion, which is 4.5 percent of gross domestic product (GDP).

Market analysts say while the demand for the money market has been due to speculation on reduced rates, there are no other instruments to provide substitution for money market instruments.

Earlier, market analyst Benson Jere said ideally, investors would be going into the capital markets instead of interest bearing assets, adding that as rates go down, the capital market becomes more attractive than the money market.

In his State of the Nation Address in May, President Mutharika, while admitting that interest charges for domestic debt which is characterised by short-term debt,remains high, said government is strengthening debt management practices through adherence to public debt policies and medium -term debt strategies.  n