Halima Twabi has always loved science as a child. She went on to graduate at Chancellor College with a Bachelor of Science Degree and Master of Science in Biostatistics. However, growing up, she heard people assert that sciences are for men, but she wants to change that mindset. She initiated a programme in September last year called Malawi Girls in Science, Technology, Engineering and Mathematics (Stem) to instill the love of science subjects in young girls.

Twabi, 25, is now a lecturer in statistics at Chanco and the head of the Statistics section under the department of Mathematical Sciences. She is the first born and only daughter in a family of four.

She grew up in Blantyre where she went to Jamia Islamia Primary School in Limbe and later to Assalam Girls Secondary School in 2003 where she sat her Malawi School Certificate of Education (MSCE) examinations in 2006.

Twabi, who comes from Nkata Village, Traditional Authority Chowe in Mangochi, was top of her class and was selected to pursue a Bachelor of Science Degree at Chancellor College where she graduated in 2012 with a distinction.

She joined the department of Mathematical Sciences as a fresh graduate the same year and immediately enrolled for a Master of Science in Biostatistics.

She also recently attended the 2016 Mandela Washington fellowship in the USA under the public management track where she learn how the US public sector is run in the State of Illinois at Urbana-Champaign.

Her initiative aims at inspiring and motivating girls and women to go for Stem courses and careers through technology and innovation, for the country’s development.

“I have loved sciences since I was in primary school. However, it was hard to do sciences because I had to compete with boys. I heard girls complain about Mathematics being hard and some boys underestimate girls’ capabilities to the extent of intimidating us with failure.

“Despite all this, I stuck to my sciences. Luckily, I went to an all girls secondary school. The negative attitudes about science were still there, but I wanted to prove my fellow students wrong,” she says.

Twabi said it saddened her to always hear remarks that sciences were for men, hence, her decision to do something about it through Stem.

It was last year when the Malawi University of Science and Technology (Must) was opened and the selection of just nine percent of female students moved Twabi into action. She decided she heard enough complaints.

“I discussed with my colleague and friend Fiskani Kondowe and we decided to become ambassadors of girls in science and promote the subject among them as part of the initiative.  We conduct school outreach programmes by holding career talks, motivational talks and mentorship. We also establish science clubs in schools that do not have any,” she says.

Stem also aims to prove to younger girls that sciences are interesting and that a woman has all the capabilities of excelling in them.

“We also focus on uplifting girls by imparting sound morals. The main idea is to have a generation of women who maximise their potential by working and earning their success, not waiting for opportunities to be handed to them on a silver platter simply because they are females,” she points out.

Nonetheless, the drive to reach out to girls for the sciences has not been without challenges, Twabi admits. She says while the initiative aims to reach out to as many girls as possible, communication is a problem.

“Publicity is one of the problems we are facing. The team is very small and we are unable to reach to as many students as we would want,” she says.

Apart from that, since the initiative is about capacity building for the girls, she says they need female volunteers to act as mentors in various districts, but that is currently not the case.

Another challenge, she says is the lack of resources to conduct their activities.

Despite all the challenges, Twabi still dreams of the day when she will see the numbers of girls in Stem increase.

“I would like to work with the National Council for Science and Technology to establish science resource centres in Malawi where girls can have after-school programmes, mentorship and training in Stem as well as hold annual science camps. I would love to reach out to girls in rural areas because we have brilliant girls who lack resources to live their dreams. I want to instill confidence in young girls in Malawi,” she says.

She believes people have the wrong perception about Muslim girls, with no right to acquire education.

“This perception is wrong. We have seen a lot of Muslim girls get an education and are contributing to our societies. I want to stand up for Muslim girls out there, to encourage and inspire them to believe they have what it takes to succeed in their education.

“I would also like to give them a sense of pride in what they are and that they, too, can contribute to society. It is high time people stopped asking questions such as, ‘so you go to college? It’s my first time to see a Muslim girl in college’. I want to help girls from the village access quality education,” she explains.

Twabi will not rest until she sees as many women doing science and science related programmes and being part of the decision making in Stem fields.

She acknowledges that lack of female representation in Stem leaves out half of the world’s population and this proves problematic considering that in the next decade, more than 80 percent of jobs will require technology skills. n

KA ‘Cashgate’ suspects out on bail

‘Women with disabilities are not pity objects’ 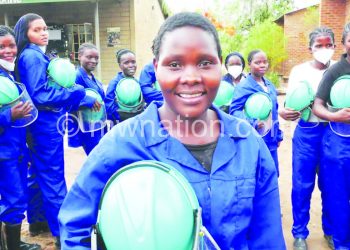 ‘Women with disabilities are not pity objects’