by Christopher Nhlane
in Feature of the Week, Front Page
5 min read
0
Share on FacebookShare on TwitterShare on WhatsAppShare on LinkedinLinkedinShare via Email

The former ruling People’s Party (PP) on Friday sealed its national convention, where founding leader and Malawi’s ex-president Joyce Banda was chosen to be the party’s presidential candidate in next year’s tripartite elections.

The convention, held in Blantyre from Thursday, followed similar ‘elective’ conferences by Malawi Congress Party (MCP), Democratic Progressive Party (DPP) and United Democratic Front (UDF) held between May and August, where incumbents—Lazarus Chakwera, Peter Mutharika and Atupele Muluzi—were endorsed as torchbearers in the May 21 polls.

Essentially, this means all the four major parties represented in Parliament have unveiled their front-runners to the electorate less than eight months to the 2019 presidential race, which promises to be another highly-contentious vote in recent history.

The path taken by MCP, DPP, UDF and PP must, therefore, not be taken for granted given Malawi’s background, where only few registered parties comply with their mandates in holding such conventions regularly. What disappoints most, though, is that these conventions virtually lacked meaningful space for contestation at the presidency level.

Of the four candidates who secured the parties’ highest prizes during the conventions only Banda won after ‘effortlessly’ defeating her sole challenger, Leonard Mphidza, PP’s deputy secretary for the Southern Region. The rest were unopposed.

Commenting on this absence of political contestation in the parties’ presidency at the conventions, Nandini Patel, a political scientist at the Catholic University of Malawi, described the scenario as a betrayal to the expectations of Malawians. 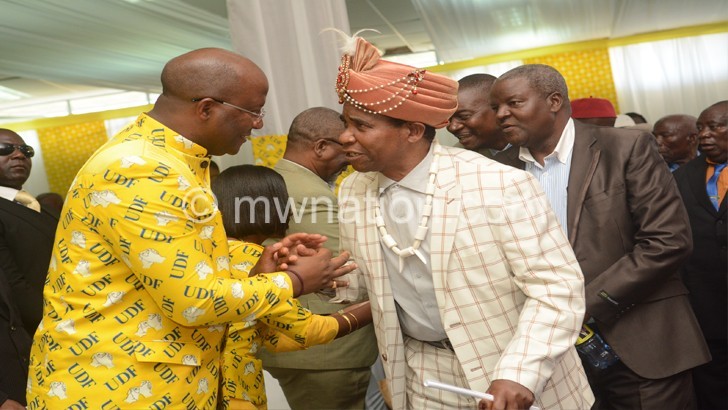 Patel said: “This is not because there were no interested contenders but perhaps they faced serious resistance from within or were just not given the space. Whatever the case may be, the result is further fragmentation of the parties.”

Among the key merits for democratic leadership is the generosity spirit where party leaders are expected to encourage others to become leaders by promoting contestation at all levels of their party frameworks. But this was hardly the case at the MCP, DPP and UDF conventions.

Agreeing with Patel, University of Livingstonia-based political analyst George Phiri doubted whether Chakwera, Mutharika and Muluzi really understand the value of contestation in a democracy by tolerating no competition.

According to Phiri, the manner in which these party leaders secured their victories by literally being ‘rubberstamped’ implies that democracy remains a farfetched dream in Malawi’s major political their parties.

Said Phiri: “Just because these people have been presidents for these parties for long, they think if their [parties] choose new people in their positions the newcomers may not command as much following as they did, which is not always true. These people can fit in very well.”

He also trashed assumptions that some politicians possibly confine leaderships to themselves to avoid losing support from followers of candidates that may have been defeated on their posts during the conventions.

Clearly, the was Chakwera, Mutharika and Muluzi got elected as party torchbearers smacks of party protectionism where an individual’s political weight swells over time and surpasses that of the party he/she leads.

This can further be illustrated by probing into past political figures like Hastings Kamuzu Banda (MCP), Bakili Muluzi (UDF) and Chakufwa Chihana (Alliance for Democracy-Aford) whose names literally monographed with the parties they led for ages.

But reacting on why there was no challenger for Mutharika at the DPP convention, party spokesperson Nicholas Dausi said no single member of the ruling party came forth although the party opened all its national governing council (NGC) positions to competition.

“In DPP everybody was given the freedom to campaign and vie for any position, including the presidency, but nobody dared that challenge. We cannot drag people from the streets and force them to contest as president just to make our convention appear democratic, no. But we allowed competition,” Dausi says.

Mkaka said: “We never closed our doors to people. So I don’t think it is fair to say there was no competition because MCP opened up to competition. We allowed everybody to show interest and get nomination forms even for president but only [Chakwera] declared interest on that position.”

Padambo, however, said Atupele’s easy victory at the UDF convention followed a last minute withdrawal from the race by his only potential challenger and former UDF legislator for Balaka North Constituncy, Lucius Banda.

Ahead of the UDF convention, Banda vowed to lead the party in the 2019 polls amid growing speculation that the party was arranging an electoral alliance with DPP, in which Mutharika would be the lead candidate. He later defected to Vice-President Saulos Chilima’s United Transformation Movement (UTM).

Although the claims by Dausi, Mkaka and Padambo are proportional to trends in established democracies where weaker candidates nobly submit their competition to stronger ones before a contest, Malawi’s situation remains an agonising setback that has stagnated our current democracy since its inception in 1994.

Chancellor College-based political scientist Blessings Chinsinga attributes this apparent lack of alternative leadership in the country’s major parties to political misconceptions where ‘leadership’ is essentially understood as ‘rulership’, implying that only party leaders can make or review decisions at a single, predetermined and consistent position.

In his article titled ‘Lack of Altenative Leadership in Democratic Malawi’ issued in the Nordic Journal of African Studies ahead of the 2004 elections, Chinsinga writes: “Unless leaders extricate themselves from the perils of the centrist tendencies and work to facilitate participative governance, democratizing the political parties risk disintegrating into dysfunctional political entities.”

But after all is said and done the 2019 presidential race is widely seen as a test for Mutharika’s popularity amid stiff opposition from MCP’s Chakwera who was his runner up in the 2014 pols, Vice-President Saulos Chilima—his 2014 running-mate now UTM leader and his predecessor Joyce Banda of PP.

Online space is under-utilized by women

I stole someone’s man, but he has dumped me

I stole someone’s man, but he has dumped me