by Golden Matonga
in Front Page, National News
6 min read
0
Share on FacebookShare on TwitterShare on WhatsAppShare on LinkedinLinkedinShare via Email

President Peter Mutharika has broken his silence on calls to fire beleaguered Malawi Electoral Commission (MEC) chairperson Jane Ansah, saying he will not fire her but instead wait for due process of law.

Speaking to the BBC on Monday, the President declared he will not fire Ansah as demanded by the Human Rights Defenders Coalition (HRDC), who have been leading nationwide protests since June this year, demanding that Ansah resigns for presiding over a flawed May 21 presidential election in which Mutharika was declared winner.

He said: “We have a very complicated problem here that the opposition through the Human Rights Defenders Coalition are refusing to accept the results of the elections.

“They went to court and the issue before the court is whether the election was mismanaged or not, and the chairperson of [the elections] was Justice Jane Ansah. They are demanding her resignation and at the same time they are in court.”

Since May 27 this year when MEC declared Mutharika of the governing Democratic Progressive Party (DPP) winner of the presidential race in the May 21 Tripartite Elections with 1 940 740 votes, representing 38.8 percent, the political temperature has risen, with nationwide demonstrations which in some cases have been marred by looting and violence.

Chilima and Chakwera are jointly challenging the results in the Constitutional Court and seeking nullification of the presidential poll results. They cite alleged flaws in the results management process as a key factor for their case.

On the other hand, HRDC has vowed to continue with the nationwide demonstrations until Ansah resigns or is fired by Mutharika.

Ansah has previously dismissed calls for her resignation, saying she will wait for the court process. Following Ansah’s declaration, HRDC has pressed Mutharika to address the nation on the matter, but the President had kept mum on Ansah, only touching on the issue last month when he ordered the Malawi Defence Force (MDF) and Malawi Police Service to stop demonstrations, further warning anyone that went on the streets that they would be dealt with by the security agencies.

But asked by the BBC if he would consider asking Ansah to step down, Mutharika said a vehement ‘No’.

He said: “No! It’s not my job to ask her to step down. It’s very clear that the election was fair and credible. The European Union, the African Union, the Common Market for East and Central Africa [Comesa], Southern Africa Community Development [Sadc], the UNDP and even the American government said this election was successful. All these groups have said the elections were fair, credible and transparent.

“So, why should I ask her to resign? Why are they going to court and the streets at the same time. They have to decide. Don’t you see contradiction there?”

Quizzed on how he would like to bring the nation together, Mutharika said he would wait for the election court case ruling first. However, he said his administration was participating in talks to solve the impasse.

But the President was elusive when quizzed on whether he would consider meeting the main opposition leaders directly, saying the administration would first look at the agenda for the talks.

Asked on his order for the police and MDF to stop demonstrations, the President said he was only against violence that has occurred during the protests.

“You have seen the destruction that is taking place, a number of buildings burnt, government buildings burnt, people injured, over 500 people severely injured. The Constitution does not allow that…” said Mutharika, a former law professor at Washington State University.

His remarks were in sharp contrast to the blanket ban his administration has attempted to issue on the protests.

On August 21, during the commissioning of warships in Mangochi, Mutharika ordered the MDF and police to quell the protests “using all force necessary”.

He said: “As President of this country and Commander-in-Chief of the Malawi Defence Force, one of my fundamental responsibilities is to safeguard the territorial integrity and political independence of our beloved country. I am, therefore, directing the police and army to stop those demonstrations. Should HRDC and MCP and UTM supporters insist on invading our airports and borders, they should not say they were not warned.”

The verbal order was followed by an official statement signed by Minister of Information, Civic Education and Information Technology Mark Bottoman, reiterating the banning of demonstrations and threatening protesters with violence.

“Any person who defies the warning not to proceed with the planned demonstrations and/or not to participate in them will be stopped with necessary force by law enforcers,” the statement read.

The demonstrations have since been suspended by the Malawi Supreme Court of Appeal pending discussions between Attorney General’s office and HRDC to ensure future protests are without violence.

Meanwhile, HRDC chairperson Timothy Mtambo has described Mutharika’s remarks as “out of touch with reality”.

He said in an interview it is hypocritical of Mutharika to cite violence as an excuse for stopping the demonstrations.

Said Mtambo: “It’s the duty of police to provide [security during] public demonstrations. It’s hypocrisy for  Mutharika to cite violence as an excuse when his government has threatened protesters and failed to provide adequate police when demonstrations are peaceful, but sent the police in large force to disperse protesters.”

He added that Mutharika’s comments were aimed at misleading the foreign audience, saying at home his “dictator-like” threats to the protesters were in contrast to the image of a constitutional-abiding administration the interview sought to build.

“He is living in denial. He says he will wait for an agenda to decide whether to meet the leaders of opposition or not, and yet the country needs leadership now. He is detached from reality. It shows he has no idea what’s really happening in the country and how Malawians feel,” said Mtambo.

He said HRDC will not relent with the protests until Ansah resigns.

State House Press Secretary Mgeme Kalilani dismissed assertions that Mutharika was contradicting his earlier remarks, saying the President has been clear that he supports the right to demonstrate but his government is against violence and criminal behaviour. 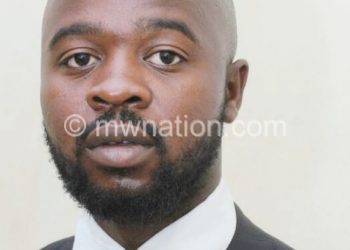