by Eric Mtemang’ombe
in Business News, Front Page
2 min read
0
Share on FacebookShare on TwitterShare on WhatsAppShare on LinkedinLinkedinShare via Email

Malawi’s gross domestic product (GDP) growth will drop to 3.3 percent in 2018, declining by 0.7 percentage points from four percent recorded in 2017, blamed on declining maize output and power outages that have slowed down industrial growth, the International monetary Fund (IMF) has said. 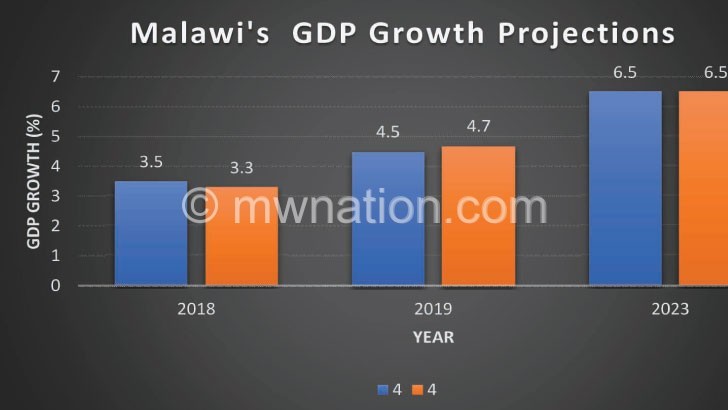 In an interview on Tuesday, IMF resident representative Jack Ree attributed the downturn to a decline in maize harvests, resulting from the fall armyworms that plagued some districts in the 2017/18 growing season and the persistent blackouts that have become a common occurrence in the country.

“Malawi had a lower maize harvest in the 2017/18 growing season mostly due to the fall armyworms and erratic rainfall patterns that hit some districts in Malawi.  Although there was an improvement in other crops, it was not enough to offset the decline in maize harvests on overall economic growth,” he said.

Ree said the country also experienced incessant  blackouts in the past year which slowed down industrial performance and is undermining the private sector’s performance.

The private sector’s underperformance also contributed to the deceleration in Malawi’s economic growth, he said.

University of Malawi’s Chancellor College economics professor Ben Kaluwa said in an interview  on Tuesday the downturn in Malawi’s economic growth has been caused by Malawi’s inability to market and sell its products on the international market and a poor fiscal environment in the economy.

Responding to comments that the country’s economy is vulnerable to weather-related and natural conditions, he said Malawi can improve its resilience to natural shocks by moving away from primary production and investing in capital intensive agriculture.

On his part, Economics Association of Malawi (Ecama) president Chikumbutso Kalilombe said the country should focus on setting maize prices at a competitive level where farmers can benefit from their produce.

“We need to improve the agricultural sector by intensifying value addition and mechanisation to make it more productive. The government should also stop fixing maize prices at below market prices on the political inclination that high maize prices would indicate government failures. The price should be set at a level where it can cover the cost and the margin,” he said.

Treasury Secretary Ben Botolo could not be reached for comment, but Minister of Finance, Economic Planning and Development Goodall Gondwe earlier projected Malawi’s economy will grow by 4.1 percent in 2018. n