For four months in a row, Malawi’s year-on-year inflation rate has been on the upward spiral with National Statistical Office (NSO) figures released yesterday showing the rate has jumped by two percentage points from 9.5 percent in September to 9.7 percent in October.

The jump in inflation, caused by rising food and no-food items, has raised fears that the Reserve Bank of Malawi (RBM) could increase its policy rate—the rate at which commercial banks borrow from the central bank—at its next Monetary Policy Commitee (MPC) meeting in December. The rise in policy rate could also compel banks to increase the cost of borrowing. 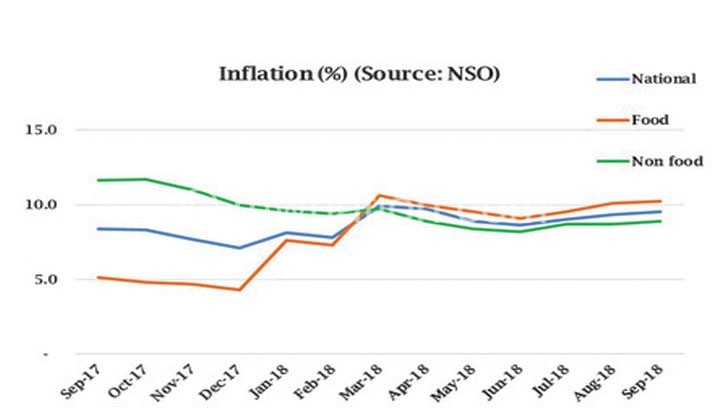 Economics Association of Malawi (Ecama) president Chikumbutso Kalilombe yesterday observed that while fears over rising policy rate could be justified when determining direction for the bank rate next month, the MPC will most likely look at the scenario of the inflation rate trend as being temporary.

“There has been a shift in monetary policy by RBM from monetary targeting to inflation targeting. The basics of this are that the MPC does not just rely on past events, but encompasses expectations as well in determining the rate,” he said.

On his part, an economist at African Institute for Development Policy (Afidep), Salim Mapila, said the continued rise in inflation rate could have undesirable consequences on the economy, which depending on the monetary policy tool to address it, could have negative effects on the citizenry.

“This [inflation] usually has the effect of triggering an increase in bank lending rates; hence, making more expensive for people to borrow money from the banks and financial institutions,” he said.

According to the Femine Early Warning System Network (FewsNet), maize prices are 11 percent above the five-year average and are likely to increase by early 2019.

Maize, as part of food, constitutes 45.2 percent in the consumer price index (CPI), which measures changes in the price level of market basket of consumer goods and services.

Electricity, housing, water and transport contribute 31.5 percent to the CPI.

The International Monetary Fund (IMF) earlier warned that managing the volatility of inflation will take time, given Malawi’s well-known vulnerability to shocks, the expected effects of increase in electricity tariffs and fuel prices and volatile inflation expectations.

In its October 2018 Economic Report, Nico Asset Managers observed that threats to inflation will come from rising food and non-food prices. n

Prolonged load-shedding, a cost to business—MCCCI

Prolonged load-shedding, a cost to business—MCCCI