Zomba Central Prison inmates have been advised to change their mindsets if they are to be productive.

Apostle Emmanuel Lumwira of Apostolic Prophetic Royal Assembly (Apra) in Blantyre proclaimed the message during prayers held at the correctional facility on Friday.

He said despite being convicted physically, inmates should not convict their minds as well, but renew them by planning on what fruitful things they will do after completing their sentences.

Citing his own example, Apostle Lumwira said while serving his two-year jail term some years ago at the same prison, he meditated on the problem that led him into the prison, corrected it and became a new person.

“I entered the gates of this prison as a criminal, but I came out through the same gates as an apostle such that today I am living a successful life spiritually and physically,” he said.

Preaching from the story of the valley of dry that had life again in Ezekiel 37:1-14, the apostle said God has the ability to change the worst offenders into useful citizens of the society.

He underscored that those inmates willing to impact the society should receive Christ Jesus as their Lord and Saviour, study the Bible, and also associate with other believers for spiritual growth.

Speaking on behalf of other inmates, Joseph  Matemba cited the prayers as fruitful, saying the preacher is a living testimony that God uses any person to deliver the Good News to the ends of the world, regardless of the person’s background.

Malawi Prison Services (MPS) regional commandant for the Eastern Region Chrissy Namakupula urged the inmates to live the gospel shared on the day.

“Our duty is to reform the behaviour of the inmates, but salvation needs the gospel,” she said.

The prayers were spiced with songs by ‘The Jews’ that comprise three Chichiri Prison ex-inmates, who inspired the inmates that they should not lose heart in prison as one day they will be as free as birds. n

Do not be abused by political parties—Blantyre Synod 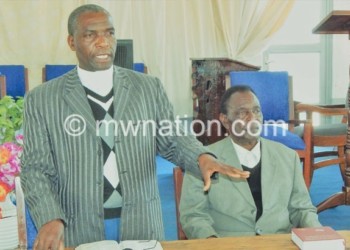