JB yet to receive official vehicles

by JONATHAN PASUNGWI
in Front Page, National Sports
2 min read
0
Share on FacebookShare on TwitterShare on WhatsAppShare on LinkedinLinkedinShare via Email

Government is yet to provide the immediate past president Joyce Banda with some of her benefits, including official vehicles, as part of her retirement package, Weekend Nation has learnt.

In an interview on Thursday, Banda’s spokesperson Andekuche Chanthunya expressed concern over government’s failure to honour some of the former president’s retirement benefits.

According to the Presidents (Salaries and Benefits) Act, former presidents are entitled to two vehicles a saloon and a four-wheel drive 10-seater—every five years.

Chanthunya said Banda, who is People’s Party (PP) presidential candidate for the May 21 2019 Tripartite Elections, has not asked for government’s explanation for the delay.

He said: “They [government] have never given her any official vehicle as part of her retirement benefits. We did not check with them because they know that they are supposed to give these vehicles. Why should we go and check them?” 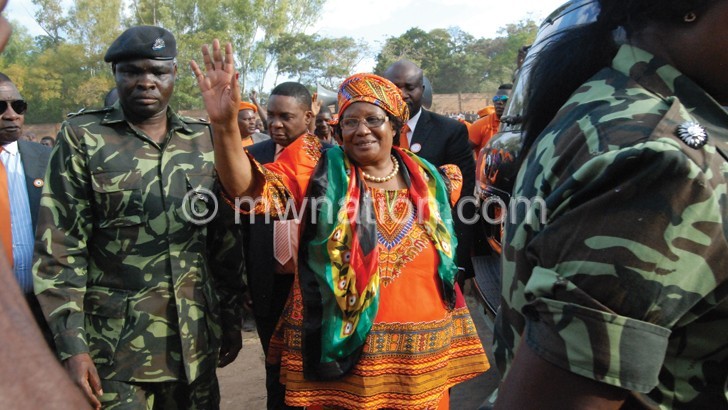 Among other benefits provided for in the Presidents (Salaries and Benefits) Act of 1995 which was revised in 2000, former presidents are entitled to a tax-free lump sum gratuity calculated in accordance with the formula applicable in the case of civil servants or one year tax-free salary, tax-free monthly pension at 50 percent of the President’s salary, seven security guards and 19 other staff.

Asked why government is yet to give Banda some of her retirement’s benefits, government spokesperson Nicholas Dausi, who is also Minister of Information and Communications Technology, said government is doing what it can to ensure that all former presidents are taken care of.

He said: “We have been discussing this issue with Joyce Banda. Her sister comes to OPC [Office of the President and Cabinet] to discuss this issue amicably. I don’t know why issues about Joyce Banda are taken to the press. Government is doing everything it can to look after all former presidents”.

The DPP government at it again