t is 7am in Ndirande, Blantyre. The township is already abuzz with fabrications and tinsmiths and a sight of consumers leaving shops with finished products.

But while many are busy with pick and pay services, one entrepreneur, Graduate Kaphiri, is deeply engrossed in mechanical engineering for innovation sake.

From his preliminary study, Kaphiri established that inherently all motor vehicle engines have a relative high fuel consumption when subjected to traction.

The 45-year-old attended Makata and Ndirande primary schools in the township before joining Chichiri Secondary School.

“I did not do well in my Malawi School Certificate of Education [MSCE] examinations, but did not take this as a limitation on my success,” says Kaphiri, who claims is single to concentrate on his mechanical engineering research.

He was raised by both parents. His father was a civil servant in the Forestry Department while his mother was a house wife.

“When I was young, I used to make clay and wire motor vehicle toys and my childhood goal was to study motor vehicle mechanics,” says Kaphiri.

Although the MSCE results swept his dream under the carpet, his father made sure the limitation did not ruin his future. He sent him to a garage to learn the practical part of motor vehicle mechanics.

“My father had saved enough money for my university education. He then used it to buy me a car to be used as a taxi and part of the proceeds were for my training,” he says.

By 1999, he was already a driver. It was in the course of driving that he started making scientific observations about the motor vehicle engine, especially its performance.

“The first thing I noticed was that the car had high fuel consumption,” he explains.

His observations were that at low gear the vehicle produced more power but with less speed whilst fuel consumption increases.

So, he theorised that high fuel consumption was a direct resultant of inefficient power transfer from generic engines to generic gear boxes. There was need to have seamless power ratio transfer all factors considered.

The desired theory was to power pack the engine by ensuring that all fuel being burnt at high revolutions translates into power generated.

“I noticed that the change down in gears increases fuel consumption,” says Kaphiri.

He observed that motor vehicle engines register highest revolutions at gear one compared to the speed of the vehicle. He fears that more fuel is lost in the process as it is not used to increase speed, but just revolutions.

Kaphiri described this as inefficiency. His argument is that a vehicle should be able to conquer most terrains even in gear four or three, occasionally changing down to one for more power, a process that will lead to less fuel consumption.

This was the beginning of his theory which builds on other related studies.

“I wanted to study the concept of fuel ignition and its combustion ,” explains Kaphiri.

The study shot up. He got his theory and aligned it to torque-vector effect. He wanted to find a work around on engines with torques.

“Because the torques are very small, they consume more fuel when revolving,” he says.

This, he calls a high mechanical efficiency that would decrease fuel consumption and reduce fuel emissions. However, his purse could not fund the project.

The same year, he introduced the idea to the department of motor vehicle mechamics at University of Malawi’s constituent college, The Polytechnic. He was challenged to test the theory.

“They wanted me to test its structural practicality. So, I went back to modify it further,” he says.

The Polytechnic says Kaphiri’s idea to innovate an engine that consumes less fuel is viable. The college has since named the prototype an aero-shaped engine.

“However, we recommended to him not to put two crank shafts to the engine as this will be too expensive to run,” explains Chimango Mvula, one of the lecturers in the department.

Tiyamike Banda, a lecturer at the department, who is also supervising the project, hails the innovations but advises Kaphiri to narrow down the scope to one research area.

“Instead of trying to modify the whole engine by making it more powerful and consume less fuel, he must identify one gap. In this case, the high fuel consumption and develop a solution to it,” he says.

Kaphiri says he is focused and appreciates the support from The Polytechnic.

“My goal is to succeed with the project. However, the project requires more resources and I am appealing to those interested in innovations to support the idea financially,” he says.

“It is for our reputation as a country and in such big dreams, combination of forces is necessary.”

Kaphiri’s innovation comes on top of several other local innovations. Recently, a man in Dowa tried to fly a locally made helicopter. Unfortunately, such dreams die with time due to lack of systems that support innovative ideas. n

‘Silent’ dangers of foot and mouth 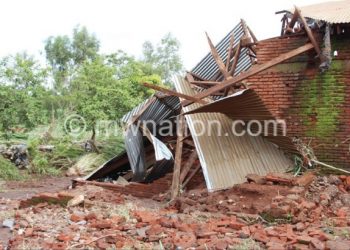 ‘Silent’ dangers of foot and mouth