Beni, a popular dance among Yaos, evokes emotions of the two world wars. Brought to Malawi by local ex-military men who had served under the British Army’s King African Rifles (KAR) in East Africa, the performers take exceptional pride to fix on their predominantly khaki uniforms with locally made medals and colourful sashes. Normally, two costumed lead dancers called captains kick-off a harmonious tune which is preceded by a chorus of whistles with women providing background melodies to accompany the singing.

The energetic dance is performed by Yaos in Dedza, Salima, Machinga, Zomba and Mangochi and it is also done by some tribes in Zambia and Zimbabwe where they call it kalele.

Among the top performers of the dance in the country is Katema beni group which has stood the test of time.

Late last week, Society was privileged to witness these legendary beni dancers in action at their own backyard in Katema, Mangochi where they enjoy a revered status.

Outgoing leader and captain is 76-year-old Totomwano Alick who knows everything about the group like the back of his hand.

“We started off during the tough colonial times where the rules were really ruthless and we survived those rough moments. During Kamuzu Banda’s rule, we used to face so much competition from other dances like gule wamkulu and vimbuza and we had to do our best to emerge number one. This is  why Katema beni has stood the test of time. We have seen all presidents from Kamuzu Banda, Bakili Muluzi, Bingu wa Mutharika and Joyce Banda to the current Peter Mutharika,” he said.

To ward off fierce competition, Totomwano revealed—with a mischievous grin—that they use a traditional method to ‘tie the legs’ of their opponents so that they do not outperform them.

“Some people tend to be bad minded to the point of casting spells on fellow performers. To guard against such conduct, our forefathers protected us with some herbs so that no mishap happens to us.

“However, the attractiveness of beni cannot be attributed to the herbs, but the dance is beautiful with captivating melodies such that people leave their chores to watch, marvel and pay attention,” stated Totomwano, who is also a traditional healer.

He also discloses the other secret behind his 17-member group is the sacrifice of the self for the common good.

“We don’t allow personal wishes to prevail over the group’s interests. If someone is identified as a potential member, we assess their interest in culture and not money,” he said.

The group’s incoming captain 53-year-old Malungo Sitiya underscored the group’s versatility by boasting that creativity flows through their veins.

“Believe it or not, as a group we don’t rehearse and when invited to perform at a function, we compose songs there and then as long as you tell us the messages you want us to put across. We don’t need to rehearse as if we started dancing beni yesterday,” said Sitiya, who has been performing the dance for 30 years.

On the group’s hierarchy, he explained why his group has well demarcated ranks: “We have two captains who lead others in dance and songs. New recruits are put behind and they rise through the ranks. The role of women is to help in dancing and provision of backing vocals and melodies. The two leading men start the songs then it graduates to the women as we dance. We also incorporate a few young boys for the sake of continuity when we pass on because we all started very young.”

Sitiya, however, bemoans the dilution of the beni culture by cultural troupes.

“What we perform is the undiluted beni and it has a corresponding tradition. You can even feel the traditional touch when we play during initiation ceremonies, weddings and other events. The type that’s preformed by cultural troupes in towns has completely lost direction and flair. It’s been highly commercialised but you don’t commercialise culture,” he said. n 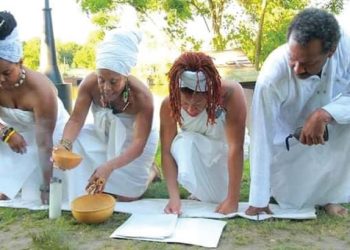