Kids in sex for shelter

by Ntchindi Meki
in Front Page, National News
7 min read
0
Share on FacebookShare on TwitterShare on WhatsAppShare on LinkedinLinkedinShare via Email

Imagine one full class at a girl’s primary school being defiled in one month. Shocking as it is, it’s a reality for street children begging in the cities of Blantyre and Lilongwe as statistics indicate that 32 young girls were defiled last month alone.

In Lilongwe, 15 of the victims—aged between 12-15 years—were also found to have contracted sexually transmitted infections (STIs), according to Tikondane Care for Children, one of the organisations working with children living on the streets in the capital.

Seven other defilement cases were recorded by police at the Victim Support Unit (VSU) at Lilongwe Area 3 Police.

In Blantyre, Step Up Kids Awareness organisation recorded 10 defilement cases during the same period while in Mzuzu we were unable to get any figures because, according to an official at St John of God Hospitaller Services, majority of street children operate from homes.

But both police and children’s organisations we spoke to pointed out that defilement cases involving street children are on the rise, only that such cases go unreported.

According to a social work coordinator at Tikondane Child Care Bridget Chetama, the organisation rescued 35 children from the street last month that included 20 boys below the age of 15.

She said: “Every girl who has spent a night in town has either been defiled or gang-raped, and all of them are always found to have contracted STIs. The girls do it because they want protection and they find it in small children’s gangs, but the gang leaders have to first have sex with them. In other instances, the girls are gang-raped.” 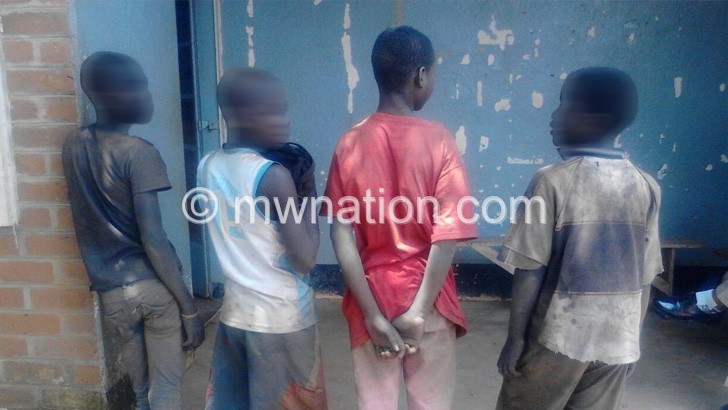 Our findings also show that apart from sleeping with gang leaders, the girls give in to sex with adults such as watchmen and mini-bus touts, to buy shelter for the night.

Child protection officer at Area 3 Police Station in Lilongwe William Chirambo said, in an interview, that 95 percent of defilement or rape cases go unreported because the victims fear being locked up for living illegally on the streets.

Chirambo explained that the victims are also unable to report the perpetrators who, to a large extent, provide basic needs of a family home, like companionship and security.

Said Chirambo: “We have a high number of boys who are in conflict with the law; because the boys are involved in theft and other criminal activities for their survival, but how do you think the young girls are making it on the street? They are not doing anything apart from begging during the day and end up in pubs and rest houses during the night just to make ends meet; that is the reality on the ground.”

A snap check by Weekend Nation during the last two weeks found that girls as young as nine are sleeping in the streets of Lilongwe and fending for themselves, and become more vulnerable during the night, when the town is deserted.

The social welfare officer from Tikondane Care for Children observed that young girls are hard to be noticed because they mostly move around in disguise.

She said: “Most of the times the girls dress up like boys and have funny haircuts, and can easily be mistaken for a boy. This is done to protect themselves, and also, there are a number of boys on the street who have sisters and would want them protected so they encourage them to dress like boys and move in groups”.

Between February and April this year, Bwaila Hospital in Lilongwe treated a total of 110 young girls below the age of 15 who had contracted STIs—some of whom were referred from organisations dealing with street children in the city.

Twelve-year-old Maria (not her real name) came to Lilongwe with her grandmother three years ago from Machinga and she has seen it all. Her parents died and she has a brother who is doing time in prison for theft.

She explained that she came during Ramadan time to benefit from the free-giving spirit of the Muslim community, and she has remained in the street since then.

But how did she meet her fate? Maria narrates: “It was on the night we had arrived. My grandmother left me with other girls and I followed them as they moved around town. We met a group of boys who told us they had a warm spot to sleep. My friends knew the boys, so we joined them. Later, I was forced to sleep with two of the boys”.

Another girl, aged 14, said she left her home in Zomba four years ago after her parents separated. Life became unbearable and she followed an uncle to Lilongwe but she claims the uncle started sleeping with her, and later chased her from his house.

She said: “I am no longer a child, I know how to survive on the street and I don’t even think of going back home to Zomba.”

In a separate interview, founder of Step up Kids Awareness Godknows Maseko bemoaned the tendency to grant police bail to suspects of defilement.

He said: “Such people end up hiring lawyers and are given bail. We are handling a number of such cases and it’s so frustrating that the victims cannot afford a lawyer while the perpetrators sometimes go scot-free.”

A census conducted by Chisomo Children’s Club, a non—governmental organisation (NGO) which deals with issues of street children, found that there were about 2 389 street children in Lilongwe compared to 1 776 in Blantyre as of August 2016.

The survey also found that one in every five street children are girls who are prone to abuse by fellow street children or adults and that there is need to find a lasting solution by removing all young boys and girls from the countries city’s streets.

But two years down the line, the situation has worsened, according to centre manager for Chisomo Children’s Club Amos Chibwana, who indicated that numbers have steadily risen, and there are now more new young girls in the capital city.

According to him, his organisation has handled more than 10 cases of young girls who were defiled in the last two months and were taken to hospital for treatment.

Some of the factors that have contributed to the status quo include deepening poverty levels, broken marriages, irresponsible parenting and exposure to alcohol and drugs at a young age.

Chibwana bemoaned what he termed as lack of political will by government for failing to act on the predicament despite having knowledge of an impending danger if the situation is left unchecked.

In an interview this week, Chibwana observed that much as various NGOs are playing their role in imparting necessary skills and knowledge to prepare the street kids for a better future, the children always bounce back on the streets because government has not been very serious about flushing them out of the streets.

He warned that if nothing is done in the coming few years, the country’s towns and cities will be infested with hardcore criminals and a generation of girls with a doomed future.

He said: “Imagine if boys of ages 12 to 14 are causing havoc in the city of Lilongwe by gang raping girls and stealing in broad day light, what will become of these boys when they turn 18 years, are we not raising monsters?”

Chetama concurred with Chibwana on lack of commitment from the authorities saying responsible offices and officers seem to be paying a blind eye to the problem.

In an interview Lilongwe district child welfare officer Jean Nthengwe admitted that incidences of children being defiled on the streets exist but could not give the exact figures.

She said different government offices have such data that needs to be consolidated.

Against the background of this growing social malaise, Eye of the Child, another children’s organisation, has written the office of Ombudsman to charge district commissioners (DCs) and chief executive officers (CEOs) for Blantyre and Lilongwe as well as CEO for Mzuzu for neglecting children living and working on the streets.

The organisation has, among others, demanded for the removal of such children from the streets within 21 days.

The organisation’s executive director Maxwell Matewere in a letter to the Ombudsman dated July 10, 2018 states that the conduct of the officials is an “act of bias in discharging duties”.

The letter states that the officials are violating section 23 of the county’s Constitution and section 70 of the Child, Care, Protection and Justice Act (2010) by not acting in the best interest of the children who need care and support.

In 2015, government moved in and forced street children and other beggars off the streets only to make a u-turn some months later saying that a special fund would be set up to economically empower the group.