Rising prices of maize, the country’s staple grain and the main determinant of the consumer price index (CPI), have slightly pushed up the August 2018 inflation rate by 0.3 percentage points to 9.3 percent from nine percent in July.

National Statistical Office (NSO) figures released on Wednesday showed that food inflation—which constitutes 45.2 percent of the CPI, an aggregate basket used to compute inflation rate—rose by 1.6 percent to 2.6 percent August from one percent recorded in July. 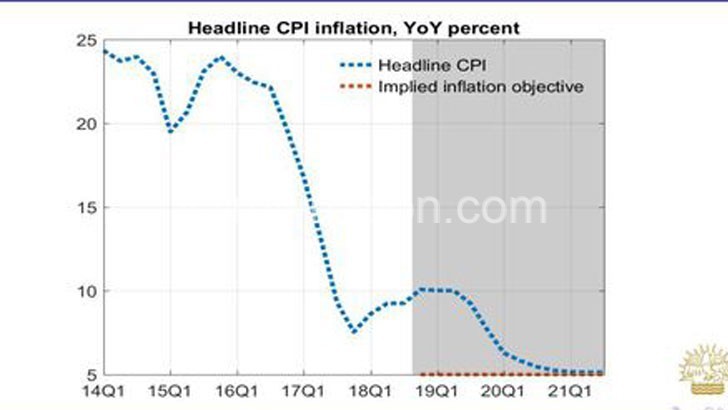 In contrast, non-food inflation registered a negligible rise by 0.1 percent to 0.5 percent from 0.4 percent in the previous month.

Prices of maize in the country have been on the rise due to food shortage. The prices have increased from K5 000 per 50 kilogramme (kg) bag during harvest April and May to around K7 500 for the same quantity at present.

According the 2018 Malawi Vulnerability Assessment Committee (Mvac) Report, about 3.3 million people in the country are food insecure this year following a drop in food production by 28.4 percent due to, among other factors, prolonged dry spells and fall armyworms.

Figures show that maize production dropped from 3.4 million metric tonnes (MT) in the 2016/17 agricultural season to 2.6 million MT this year.

While food prices are pushing the inflation rate up, the Reserve Bank of Malawi (RBM) is on record as having said that it has put in place controls to manage the upward movement.

Although RBM remained upbeat on maintaining the inflation forecast of a single digit this year and five percent in the first quarter of 2021even in the presence of rising food prices, economists have contrary views.

University of Malawi, Chancellor College economics professor Ben Kaluwa said food prices will continue to rise as we are going towards the lean period.

“With the rise in food prices; we might not maintain the single digit inflation rate,” he said.

But another economist Nelson Mkandawire has commended monetary and fiscal authorities for maintaining the single-digit window for some time.

However, he said that inflation rate might soar to 10 percent in the lean period if the supply of maize remains low.

Said Mkandawire: “Inflation will not slide as much because government announced that maize will be released. Let them release it in time then, to maintain the single digit inflation.”

He urged the need to manage food supply side by promoting irrigation farming.

He also called upon government to walk the talk on reduced expenditure to maintain low inflation levels. n