by Ephraim Nyondo
in Business News, Front Page
2 min read
0
Share on FacebookShare on TwitterShare on WhatsAppShare on LinkedinLinkedinShare via Email

GEF- a fund established by the United Nations (UN) to support developing countries with environmental management-announced the new trust fund called the Capacity-building Initiative for Transparency (CBTI) at last year’s climate change summit, COP 21, which was held in France.

GEF chief executive officer Naoko Ishi in an interview on Wednesday on the sidelines of the COP 22 summit in Marrakesh, Morocco, said the trust fund aims at increasing transparency and enhancing countries’ capacity for monitoring and evaluation of the implementation of the Paris Agreement.

She said CBIT will ensure early action on the ground and help countries scale-up their efforts to deliver their national climate plans.

She said the country will definitely endeavour to access these funds because it involves implementation of key frameworks such as Nationally Determined Contributions [national climate change plans aligned to the Paris Agreement].

Said Najira: “You may be aware that we have come up with a domestication plan for the Paris Agreement in Malawi. We have consulted stakeholders, but we need to consult further for timelines for implementation.”

Malawi has been a beneficiary of the GEF since its establishment in 1992 at the Rio Earth Summit, as a catalyst for action on the environment.

To date, Malawi has a portfolio of 25 GEF projects at different levels of implementation in the various focal areas of the environment that GEF supports, and from the GEF trust fund, least developed countries fund.

Malawi is also implementing a small grants project funded by GEF and being administered by United Nations Development Programme (UNDP).

The CBIT Trust Fund is currently operational, according to Ishi.

On Wednesday, 11 donors pledged more than $55 million to the CBIT. They include Australia, Canada, Germany, Italy, the Netherlands, New Zealand, Sweden, Switzerland, the United Kingdom, the United States of America and the Walloon Region (Belgium).

Others, including Japan, have publicly declared their intention to support the fund.

At the same time, the first set of projects have been approved by the GEF for implementation in Costa Rica, Kenya, and South Africa and also a global co-ordination platform that will share lessons learned and engage with partners to help deliver more country projects. n

Another hydropower plant for Malawi

Covid-19 pushes up Internet traffic by 35% 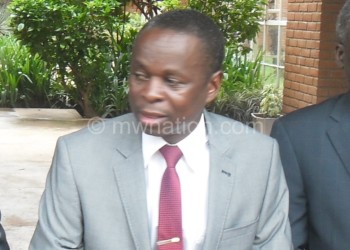 Another hydropower plant for Malawi