Malawi seems to be on its way to achieving its vision of creating infrastructure through partnerships to enhance the quality and depth of the country’s financial inclusion, Finmark Trust has said.

Finmark Trust, an independent non-profit trust, observes that Malawi’s number one priority of expanding the reach of digital payments has grown between 2015 and 2018.

The growth is both from an infrastructure perspective and the knock-on effect of lowering market costs whichhas benefited consumers.

“However, significant work is still required for priority number two, savings and investments, both from a data collection perspective as well as activity on the ground to gain critical mass in this area. 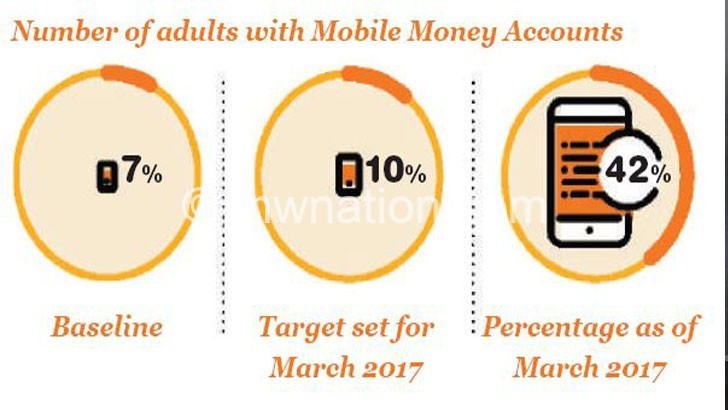 “Finance in specialised focus areas remains difficult both from a measurement perspective as well as an investment perspective,” said Finmark Trust in its Measuring Financial Inclusion in Southern Africa Development Community (Sadc) 2018 Report published this week.

The report observes that the population of Malawian adults with mobile money accounts has grown from 8.4 percent to 42.8 percent within a period of three years to 2018 despite the target being 10 percent in 2017.

Cost of mobile money encashment, on the other hand, has declined to an average 3.43 percent from five percent average in 2015.

Over the years, access to financial products and services has been an issue with a FinScope Malawi 2008 Survey indicating that 80 percent of the adult population was not able to borrow from any source to finance their activities, but this figure went down to 71 percent in 2014.

The Malawi Financial Inclusion Roadmap 2015-2020 focuses on creating infrastructure to enhance the quality and depth of financial inclusion in Malawi.

It lays out a vision for the enhancement of financial inclusion in Malawi to support national objectives through employment creation, human capital development and improved household welfare.

A study by the Economics Association of Malawi (Ecama) published in December 2018 on the state of mobile financial services usage found that many Malawians use the service for sharing mobile phone credit than actual utilisation on financial services.

The study recommended to service providers to improve on technicalities and sensitise people to the services that would build trust and that people need to be financially educated about financial services and its importance.

Reserve Bank of Malawi (RBM) principal analyst for national payment systems Chikondi Chigamba earlier agreed with the study findings as a true reflection of the situation on the ground. n