Faced with falling exports through the United States (US) trade window, African Growth and Opportunity Act (Agoa), the Ministry of Industry, Trade and Tourism says it has instituted policies to reverse the trend.

Latest trade figures from Agoa— a US government trade window that targets 40 least developed countries, including Malawi—shows that in 2017, export earnings dropped by about 17 percent to  $62.1 million (about K45 billion) from $74.4 million (about K54 billion) the previous year. 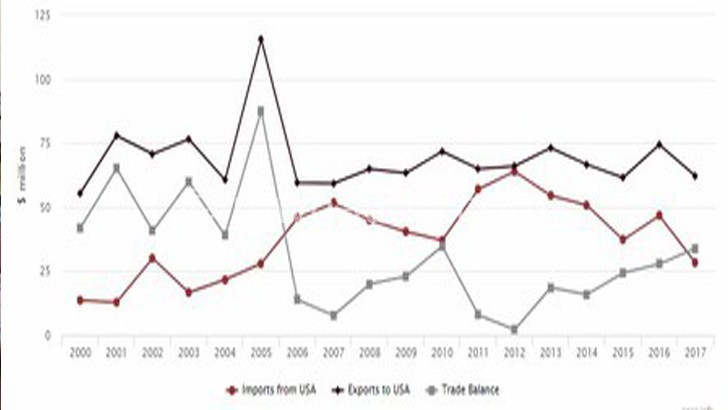 In an interview on Saturday, Ministry of Trade, Industry and Tourism spokesperson Wiskes Mkombezi said government will ensure that it does not miss out on Agoa exports as has been the trend, stressing that policies are in place to change the situation.

He said the Malawi Government is working on  Agoa Utilisation Strategy whose draft is already out.

“We are in the process of consulting other relevant stakeholders to ensure that everything is in place and ideas of all key people are incorporated in the strategy.

Last week, the office of the US Trade Representative released the 2018 biennial report on the implementation of the Agoa which shows that Malawi largely met Agoa’s eligibility requirements through the introduction of reforms into policies and practices, improved economic management by reducing government’s role in the economy, deregulating sectors and liberalising the trade regime.

The report further indicates US imports from sub-Saharan Africa recovered from $18.8 billion in 2016 to $24.9 billion in 2017 despite Malawi’s subdued performance.

In an interview, economic commentator Gilbert Kachamba, who also teaches economics at Catholic University, said for Malawi to fully enjoy the benefits of Agoa, it needs to diversify its exports as this would help address the country’s supply side constraints.

He said Malawi has low exports base with a few products exported to the US which are mostly not processed thereby attracting low returns in value.

“Malawi has other constraints other than the low export base. Some of these include the increase in cost of production which has made our exports to become expensive compared to the exports from other countries targeting the same market.

“This may be due to the business environment in Malawi coupled with up and down movements of the currency experienced recently.

“It is, therefore, important that government critically looks into such issues because the Agoa window is something we cannot afford to be missing out on,” he said.

Agoa is a piece of legislation that was approved by the US Congress in May 2000.