The life of one woman in Traditional Authority (T/A) Mkhumba in Phalombe District was drastically changed the day she was able to access potable water near her home. She will no longer have to walk the long distance, which was becoming her daily agony, to fetch water.

Together with fellow women in her locality, a new chapter has indeed been opened in their lives, thanks to intervention by the Malawi Red Cross Society (MRCS) whose K650 million water project is a timely gesture beyond the recent floods. While MRCS is popularly renowned for its disaster relief drive in form of responding to emergency needs, the two-year multi-million kwacha water project, although not yet complete, has already started providing safe water to 95 taps in the locality.

Tapping the waters from Phalombe River up a hill down to the beneficiaries is a daunting task requiring many pipes and resources. The project further provided income to locals who are engaged by MRCS to dig trenches for laying the pipes.

MRCS’ water sanitation and hygiene s(Wash) assistant programme manager, Obed Mwambakulu, told journalists during a recent tour of the project last Friday that they are targeting 62 000 households in 60 villages in an effort to provide potable water all year round to the flood-prone area.

A 2.6 kilometre return trip to the hill—the source of the water—by journalists and MRCS officials was proof of the organisation’s dedication to improving the lives of people in Phalombe, in particular the provision of safe drinking water.

“Most households have no safe water and the situation worsens during the rainy season, especially when floods strike. Cholera and diarrhoea wreak havoc; hence, the importance of the project.

“The project started in January 2014 and is expected to run until December 2016 under our Wash [water, sanitation and hygiene] project. Thereafter, we shall hand it over to the locals to run and maintain,” said Mwambakulu.

At the source of the water—Phalombe River— the main water pipe lies beneath a well constructed reservoir alongside that of the Southern Region Water Board (SRWB), systematically pumping water to benefit many in the catchment area.

Before the tour, MRCS donated assorted drugs valued at K4.4 million to Phalombe District Hospital as part of its Wash project. The drugs included Deoxycline, Metronidazole, Orala rehydration salt (ORS) sachets and IV fluids in support of mainly children and under-fives whom Mwambakulu said are mainly affected by diarrhoea.

According to MRCS communications manger Felix Washon, his organisation has embarked on long-term solution as part of a recovery plan for flood victims.

He said they were looking beyond their immediate needs of shelter and food; and is in the process of constructing 200 disaster-resilient houses, rehabilitation and sinking of new boreholes in Chikwawa, Nsanje, Phalombe, Zomba and Blantyre.

Washon said the houses will be built with interlocking bricks made from mixing cement and soil.

In this regard, MRCS took journalists on a tour of its Wash, food security, community health, child care and support and housing projects in Mkula, Mbalame, Chilunga, Godfrey, Madyelo and Tchauya villages in Zomba.

Zomba District Wash programme officer, Cecilia Banda, said the project, which started in 2012 and ends this year aims at raising the level of health status of communities by promoting health, preventing disease, protecting life, fostering the general well-being and reducing the occurrence of premature deaths.

Other activities include providing cassava and sweet potato cuttings, and irrigation equipment to Madyero Village and funding backyard communal and individual gardens at Tchauya Village to boost food security.

MRCS is also rehabilitating vandalised solar panels and solar tower at Sekwere Primary School in Tchauya village as it has also sunk a borehole in the area.

But Banda admitted that their work has not been without challenges, with low community participation in some construction projects, disruption of work by the recent floods and increasing school drop-outs due to pregnancies and early marriages topping the list.

“However, we have good coordination and collaboration with partners, especially government, timely financial support from MRCS headquarters, visibility in both print and electronic media; and improvement in sanitation status in schools and households,” she said.

Nonetheless, relief items for flood victims continue to pour in from well-wishers through MRCS.

The society last Monday donated items worth K2 million to 120 families in Chikwawa. Each family was given a 50 kilogramme bag of maize, two litres of cooking oil and a hamper of assorted items, ranging from edibles to clothes.  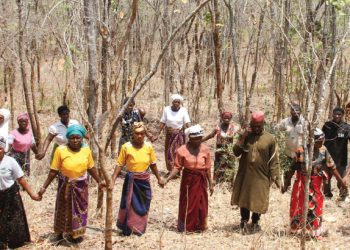