The 2018 Mo Ibrahim Index of African Governance (IIAG) has ranked Malawi 19th with an average score of 55.8 percent out of 54 countries, representing a deteriorating governance trend of -1.4 points between 2008 and 2017.

The declining trend of negative 1.4 points explains how Malawi has moved from position 18 last year when it had an overall governance stagnation of 0.00 per annum for over a decade.

The Mo Ibrahim report comes after the United Nations Development Programme (UNDP) Human Development Indext (HDI) reported that the country’s value for 2017 stood at 0.477— which put the country in the low human development category—and positioning it at 171 out of 189 countries and territories.

Key shortfalls in the 2018 IIAG are on transparency and accountability where Malawi has scored 38.3 percent, ranking 24, with a deteriorating trend of -5.1 points. This category measures access to public and legislative information, access to records of State-owned companies, accountability of government and public employees, sanctions for abuse of office, absence of corruption in government branches and public sector and anti-corruption mechanisms.

It confirms a recent declaration by the Anti-Corruption Bureau (ACB) that all government ministries, departments and agencies (MDAs),

especially those that provide services to the citizenry are rotten with stinking corruption.

Malawi is also among five countries that deteriorated over the decade on reliability of electricity supply, which it stresses is crucial to Africa’s development and the ability of countries to provide sustainable economic opportunity.

Reads in part the report: “Of the 43 countries for which there is data, 25 have improved in the indicator Reliability of Electricity Supply over the decade. Chad has been the only country to experience year-on-year improvement since the beginning of the time series.

Probably, the poor ranking on transparency and accountability and access to electricity, has also resulted in poor ranking on sustainable economic activity on which the country is rated at 42.8 percent sitting at position 30. This looks at business environment, infrastructure, and rural life. 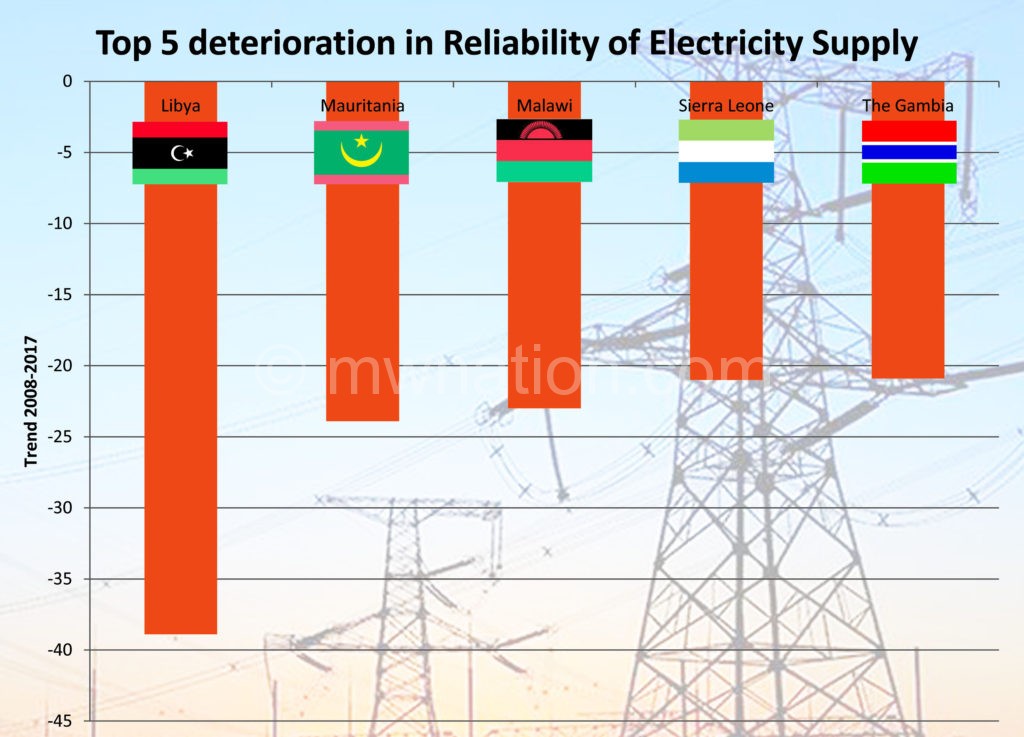 Reacting to the report, governance expert Rafiq Hajat of the Institute for Policy Interaction (IPI) said it was a true reflection of the goings on in Malawi.

He said Malawi’s challenge has been lack of leadership and vision, selfishness, dishonesty, lack of accountability and integrity and practising democracy in a disguised autocracy.

Said Hajat: “It requires a complete rethink of the environment. If you look at the level of corruption in Malawi, billions of kwacha being lost in Cashgate and all the successive ‘gates’, it makes me think that if

that money had been used to provide quality education to our young children, we would be assured of a vibrant future.”

He said: “One would have expected a responsible government to do away with perpetual blackouts, improve education standards, including access to tertiary education, among other endeavours.

“The MCP government will revive and improve education standards, generate and supply enough power for local consumption and for investors. We need a nation that can pride herself of a tangible development agenda whose fruits will be enjoyed by all the citizenry and that above all, we should be ranked alongside big African economies.”

Minister of Information and Communication Technology Nicholas Dausi could not be reached for comment on Tuesday, but speaking during the opening of the 3rd meeting in the 47th Session of Parliament and 2018/2019 budget meeting, President Peter Mutharika said his government continues to promote integrity and accountability.

Published since 2007, the IIAG was created to provide a quantifiable tool to measure and monitor governance performance in African

countries, to assess their progress over time and to support the development of effective and responsive policy solutions.

Muluzi, others pay tribute to Chikaonda