It is now official: former president Joyce Banda is now a political exile and has little or no desire of returning home, until—at the very least—2019 when the Democratic Progressive Party’s current term officially comes to an end.

That, of course, is on the assumption that DPP won’t be returned to power. Only then would JB be confident and feel safe enough to countenance returning home. If DPP wins in 2019, JB supporters can kiss goodbye any dream they would see her in the flesh on Malawian soil.

That, of course, is not my hallucination. It comes in the form of a rabblerousing terse statement issued by People’s Party secretary general Ibrahim Matola, which enumerated the dark arts practiced by DPP as it continues to hound JB.

In a nutshell, PP alleges that, as a country, we have thugs and murderers for leaders—the very people JB who wined and dined with until they gently nudged her away from the table in December 2010—who have murdered before and attempted to take her life before. And with DPP now keen on payback, the stakes have been raised a notch and nothing can hold them back from resorting to the same dark arts, which have had JB quivering in fear.

Empty and banal as it was, there were a lot of things to be learnt or confirmed from the short statement. First, that JB is a coward who should, perhaps, never have ruled Malawi. No country, even a banana republic, deserves to be lorded over by a coward, who is now throwing tantrums after her country turned its back on her due to her leadership lapses. What sort of demons did she provoke which she is afraid to confront back home?

Second, that much as she takes delight in the honour of being Malawi’s first female president—or, indeed, its first female ex-president—she has no ambition of becoming the country’s first female martyr of this or the last century, as if we needed any.

That, somehow, her alleged involvement in Cashgate goes deeper than would be imagined; one wonders, if she had had no hand in Cashgate, why would she fear that the DPP would hung out to dry? Even if DPP were to crucify her, has JB’s faith in the Judiciary worn so thin that she fears she would be fried and thrown to rot in the cooler for no reason at all? There is more than meets the eye.

Sadly, this is the same JB who has given one reason or another for her failure to return home and each one of them seems more absurd than the next, all of which give the general impression she has made up her mind on one thing: Come hail or sunshine, she is not returning home until DPP has been shown the door.

She argued she could not return because government had not provided her with a retirement home. Government argued, and rightly so, that it could not allocate a house to an absent occupant. It is as if she was expecting the government to build a house and transport it over to wherever she is so that she can fly back in it. What if she returned to test government’s commitment on its pledge?

By the way, isn’t it ironical that she says feels insecure, but she then demands of the same government to provide security?

That alone should all but seal the fact that JB has given up on the country and has declared herself as the first female political exile of the current political movement. n

A taste of DPP whiplash!

This fight is between DPP and MCP 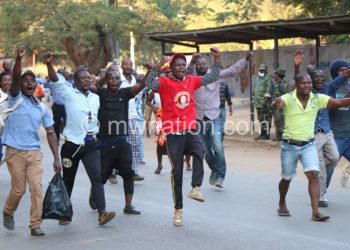 This fight is between DPP and MCP