Faith Malenga is a woman who believes in living her dream. From a simple vision, her herbal hospital in Zomba is now taking shape, as Emmanuel Muwamba found out recently.

Chilingulo Village in Zomba, perched between Domasi and Namwera turn-off, is not one that stands out among other villages in Malawi.

But soon it will tower over other areas when it becomes a model village following the construction of a herbal hospital that can admit 110 people.

A herbal processing plant is already in operation. A research and training centre has also been constructed.

The impressive complex structure in the village is almost complete. It has already been roofed. Tiling is about to take off as well.

As we toured the structure on Tuesday, noise coming from hammers and shovels interrupts the tour guide and owner of the hospital, Faith Malenga.

â€œLetâ€™s take this way,â€ she barked. â€œThe carpenters and plumbers are now working so that come December, all is set for opening.â€

â€œWe are building a herbal hospital to admit 110 patients at a time. This will serve the whole of the SADC region. I have done my research properly and none of the countries around Malawi has a hospital like this one, a herbal hospital,â€ added Malenga.

In the middle of the structure, there is an open air space which Malenga said will be turned into a recreation centre for both guardians and patients.

The hospital admissions will cater for all, the rich and the common person in the village, she said.

â€œThat is why we have different sizes of rooms so that we accommodate people with diverse social and economic backgrounds,â€ said Malenga before we settled down for an interview.

Malenga, who has for the last several months served her herbal concoction to many people in the country, said her herbs, in addition to special prayers, cure chronic diseases such as diabetes, cancer, TB and sexual dysfunctions, although there is no scientific proof so far.

â€œThe herbal products are used for prevention, healing and detoxification of different diseases, including high blood pressure,â€ she said.

The World Health Organisation estimates that up to 80 percent of people worldwide still rely on herbal remedies for health care.

And now with the shortage of drugs in hospitals, high costs in clinics and pharmacies as well as drug resistance which often leads to treatment failure, Malawians resort to herbal medicines to cure various ailments.

How it all began

Malengaâ€™s fortunes and discovery follow a study on herbal products done in Uganda several years ago.

After reading a magazine which features articles on herbs and how they are helping Ugandans, Malenga sought the advice of Dr Mary Shawa, formerly PS for Nutrition, HIV and Aids in the Office of the President and Cabinet.

Shawa, according to Malenga, produced more publications in the form of books with detailed information.

Malenga said after going through the books, she became interested in how different herbs work and mooted the idea of blending them into herbal medicine.

The vision of building the hospital was then born in 2009.

â€œBut I started administering herbs in 2008 when I noticed that people were being cured from different ailments. That is when I thought I have to widen my knowledge. So I started thinking big.

â€œI did not know it would be this huge. Week by week, people were coming with their testimonies that pushed me to start growing the herbs instead of just being supplied,â€ she explained.

Just behind the hospital, Malenga has a field containing all sorts of herbs and thinks this will motivate villagers to grow and sell them to her in order to increase the production capacity.

â€œLike in this area, Malosa in Zomba, there is no cash crop. So my vision was to start growing the herbs to set an example that it was a commercially viable venture. So we started growing 1 000 Moringa trees, lemon grass and Artemisia.â€

Other plants such as rosella are bought locally in Lilongwe while ginger is imported from Tanzania and South Africa.

â€œI felt a push after a discussion with Dr Shawa,â€ said Malenga. But the problem was how to do it. I eventually looked for women looking for ganyu and showed them photos from the books and asked them whether they could identify the plants. They said yes and I asked them to collect samples for me.

â€œI started processing them as indicated in the books. We did not have anything. I borrowed a mortar and pestle right there in Area 18B.

â€œThen I went to Capital Hill, government offices, asking people suffering from diabetes and high blood pressure (BP). I gave them the samples. I did not ask for any money. I told them to report to me after two weeks,â€ she said.

For credibility, Malenga had to take the two books from Dr Shawa with her, inscribed â€˜Government property, Department of Nutrition.â€™

â€œAfter one week, I started receiving phone calls from the clients, especially those who had BP and diabetes, requesting more of the herbs,.

â€œSo I tasked the women to collect more and more of the herbs. We agreed on prices so it was like we had started a business,â€ she said.

The business took off

â€œIt came as a revelation. I think the Holy Spirit was pushing me. When the Holy Spirit sends you to do something, you behave like a mad person. Nobody understands you. None of my relatives understood me. They wondered whether I had become a singâ€™anga.

â€œNow I was going to Capital Hill everyday and started giving people the herbs on credit. I would collect the money at the end of the month,â€ she said.

From the sales, Malenga saved her earnings and now is building the 110-bedroom hospital.

â€œThis is exactly zero-deficit. I have no loan with the banks. Currently, we are almost touching almost K100 million. It is just Godly-serviced. There is no funding from elsewhere.

In 2010, one of her three daughters advised her to participate in an international exhibition at the Trade Fair grounds in Blantyre.

â€œMy daughter advised me to go there so that another set of people other those in Lilongwe would know about my herbs. I was scared and sceptical but I went. I talked for about 15 minutes on TV. After one week, there were a lot of testimonies.

â€œEverybody who bought the herbs had testimonies. That is how we had a congestion of people. In a day I could serve about 200 clients.â€

Malenga is an agriculturalist. She did a diploma in agriculture at Bunda College of Agriculture where She graduated in 1987.

â€œBut I have never been employed. I am unemployable although I briefly worked for NBS as a banker for six months before I left for the US. My husband was going for a PhD and we stayed there for years.

â€œWhen I came back, I had no interest to work. It was like I had been brainwashed. I ended up setting up my own business,â€ she said.

â€œThat is my idol woman. She is the richest woman. I saw her on TV and thought if I go back to Africa, I can be another Oprah Winfrey. But how?â€

After harvesting the herbs from the field, they are dried. Some of the herbs are strictly for the sheds while others are dried in the sun, according to Malenga.

â€œThat is why you have seen those concrete slabs. Herbs such as rosella have a lot of water, so you canâ€™t dry them in the shed.â€

So far, Malenga is concentrating on dried products because of limited storage capacity. She makes sure that they are 100 percent moisture-free before they are processed.

â€œWe donâ€™t pound in a mortar anymore. We are rich now. We have a mill that processes the herbs.

But how does she administer herbs, an area for medical personnel?

â€œI am an agriculturalist. You can see this is a section Bunda College is leaving out. Herbal production is coming out to be the best in the world. So I am applying the agriculture background.

â€œI am farming herbs, not food crops. I am helping people on healing. You would be surprised by how people get healed when they get the herbs.

â€œThat is the revelation of God now. Maybe it is going this far because I have the knowledge of agriculture and the Bible. I donâ€™t have to go to a nursing school to be a nurse. I just have to employ them,â€ asserted Malenga.

But when the hospital is operational, Malenga plans to employ medical personnel.

â€œThis is because when a sick person comes here, we need to know what has wrong. But the difference is that they will not receive tablets here. They will not have a drip here. We know our own way of inserting a drip in a person who is sick by taking the herbs,â€ she said.

Malenga said she is not a witchdoctor.

â€œI am a winner. I pray at Winnerâ€™s Chapel. I donâ€™t know where witchdoctors pray. I am not a singâ€™anga. I have got a university diploma in agriculture. I went to school. I am a researcher,â€ she charged.

Before people receive the herbs, Malenga counsels them.

â€œPeople that visit me are so depressed. They have gone to conventional hospitals and asingâ€™anga but they have failed.

â€œNow when we have those people we tell them about God. I minister to them first, telling them that the stage they have reached, it will only take Godâ€™s miracles to get healed.

â€œI spend maybe 2 hours counselling the patients before they buy the medicine. By the time they leave here, it is like they are already healed. I donâ€™t want to hear funny stories because God heals,â€ she said.

Do the herbs cure Aids?

Malenga, a firm believer in God, was not assertive enough on whether her herbs cure HIV and Aids.

â€œAll types of diseases on earth God can cure them. It is written in the Bible. I donâ€™t want to say we cure Aids. I have never seen the virus with my eyes but the complications which an HIV/Aids patient harbours, I have seen them being cured. So I donâ€™t know what they are talking about (that there is no cure),â€ she said.

At the moment, the hospital is only training patients on how to mix the herbs and administer it at home.

Malenga is unhappy that government is not supporting her initiative despite the numerous health challenges the country is facing.

â€œSometimes you try to approach people but you end up being suppressed and oppressed. That is why this hospital is being built in the village. Everybody fears competition.

â€œBut for the past three years, we have been advertising. Even some government officials take these herbs. How they donâ€™t meet and discuss this? I donâ€™t know,â€ she wondered.

Ministry reaches out to the elderly 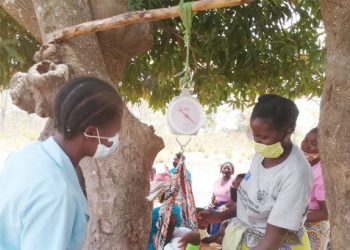 Ministry reaches out to the elderly