Martha Chizuma is not an activist from the civil society, but a Malawian civil servant.

For the past few years, she has inspired many by radically transforming the office of the Public Protector (officially known as the Ombudsman) in Malawi.

Martha has now been appointed as the new Anti-Corruption Bureaus (ACB) director general, becoming the first woman to head the office in Malawi.

So popular is the former Ombudsman that when it became known that this office of the ACB was going to fall vacant, members of the public started agitating for her to be the next occupant of the office.

Those calls only became louder when it was revealed she had applied and was shortlisted for the job.

Finally, her name and those of others were sent to President Lazarus Chakwera to make final call.

What the public didn’t expect was that the Public Appointments Committee (PAC) of Parliament would stand in her way when Chakwera submitted Martha’s name to the committee as his choice for the job.

And so the public made its position known. Civil society groups planned street demonstrations, the whole House agreed a motion compelling the committee to provide a report immediately on their decision before the coup de grace was overturned.

And on Monday last week, on a rare meeting during the public holiday, the committee reconvened and confirmed her.

She sanctioned the very senior government officials, including hitherto unprecedented personal costs for maladministration that costs taxpayer money or injure her victims.

A lawyer by training, under her tutelage, the office conducted complex investigations and public inquiries which were not previously done by her predecessors.

Chizuma—who has drawn comparisons to former South African Public Protector Thuli Madonsela whom she confesses to admire—has become the face of public outcry.

This is all for good governance and the fight against corruption in a country where over 40 percent of its national budget is reportedly lost annually to corruption.

Martha has also risen to the occasion at a time many governance issues are failing to function as expected by the public amid allegations of capture and meddling by political forces.

Among her key rulings, she ordered the most senior technocrats at the Office of President and Cabinet (OPC), Ministry Finance and Ministry of Agriculture to issue a public apology for the handling of a $50 million (about K37 billion) loan from an Indian bank to procure tractors for rural farmers.

The tractors ended up being sold cheaply to politicians and senior government officials.

When the Principal Secretary for Ministry of Agriculture, Irrigation and Water Development Gray Nyandule Phiri and Secretary to Treasury Cliff Chiunda refused to comply, she asked the court to jail the officials.

They escaped jail with nine month suspended sentences for disregarding earlier court rulings and ordered the OPC to fire the two.

But just who is this lawyer causing a sensation?

The director general holds Bachelors from University of Malawi and Masters’ Degree in international economic law from the University of East London.

Back then though, she had no idea one day she will carry the heavy responsibilities that fate has thrown at her today. But her convictions to justice developed early in her academic pursuit.

“I think it was in second year of law school, especially through the legal clinics which as students we would undertake that I really appreciated the power of the law in delivering justice and goodness. It was at that time that I determined in my heart that I will be a lawyer that uses the law to bring about ‘justice and good’.

This is what I have strived to do in my legal career in the past 18 years and I believe consequently led me to the jobs I have done and positions I have held,” she recalls in an interview.

While Martha is now a heroine to many, she has not always had it easy. To reach the pinnacle of professional life, she has made several sacrifices.

“I think on top of the list is limited time with family and friends. Being a lawyer is tough and demands a lot of time reading and researching. But for me that kind of doubled up in the 70 months I have been Ombudsman. I think it is fair to say that I have practically been working almost every day because of the nature of that job and also other portfolios that go with that position.

“Added to that, I am quite an ardent believer in rule of law. There have been moments I have had to investigate and handle cases of those close to me. There are a lot of discomforts that go with that, but the job still has to be done. That is not easy. Related to that is that the positions I have held, especially Ombudsman do not only require intelligence and hard work. There is also a certain sense of decorum that go with it and that is what builds trust and confidence in the office and yourself as a person. From experience, that has demanded staying away from some people and cutting off some relationships I felt may not be helpful in the course. That is not easy at all. But it has to be done,” she explains.

But despite her soaring public profile, Martha reckons she remains humble and deeply rooted in her “simple and ordinary family.”

“When I am home, my boys make sure that I am just mum that’s all. My brothers and sisters are all busy doing their life. At my church I am just another member.  I have a small circle of good friends who ensure that I can let up and be goofy at times.

“Otherwise in terms of the foundational principles that guide my life, they are the same both in my private and public lives and thus, I really don’t have to change my behaviour depending on my setting making my life just a continuum of just being Martha,” she adds.

Her job means she has rattled a few feathers along the way. But it’s a mark of her resolute character that even in the interview; it’s not something she is so keen to talk about.

Quizzed directly whether she has received threats for her quest to ensure justice, she responds modestly: “Well to an extent there have been threats thrown my way.”

But the new job as the country’s anti-corruption czar will put at crossing hairs of many and the job itself will be very daunting for anyone.

Those enemies of the people might as well include those who rejected her as new ACB boss at Parliament. But she harbours no ill feeling towards the lawmakers, she says.

“Well you need to keep in mind that as Ombudsman, I have been an employee of Parliament. That means I have interacted with the MPs many times. I have an idea of the thinking process at Parliament.  So based on my two-hour interaction with them on that day, I knew deep down my heart that it was politics that had failed and not me. But still this being a very public recruitment process there was a danger of feeling like a failure.

“But I am glad there was an army of people who sent me encouraging messages. In particular, there was one judge who called me I think within five minutes after the news of my rejection broke. He prayed for me and once again reminded me that there is no need to feel rejected and ashamed because Christ dealt with all that on the cross. That and all the support I received kind of determined my subsequent reaction to the whole thing.

“I am, however, grateful that eventually the same Parliament corrected this wrong and confirmed me. It is now on me not to betray God who chose me to this position, the President who appointed me, Parliament [PAC] which confirmed and the people of Malawi who supported me by discharging my functions faithfully and in accordance to the law.”

But even in dark moments, her faith has kept her going.

“I believe God has plans for each one of us. When all is said and done and I go back to my creator, I want God to say everything He had in my plans on earth, I did well. That is why with God’s grace, everything I do in my personal life, my career life I just try to give it my very best.”  n

Should I trust hubby with a cute maid? 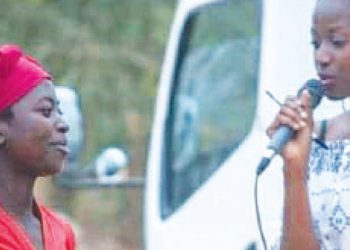 Let us consider boys too