The TNM Super League outfit defied all odds to beat Nyasa Big Bullets in semi-finals and Be Forward Wanderers in the final to win the 2018 Carlsberg Cup K12 million prize money. 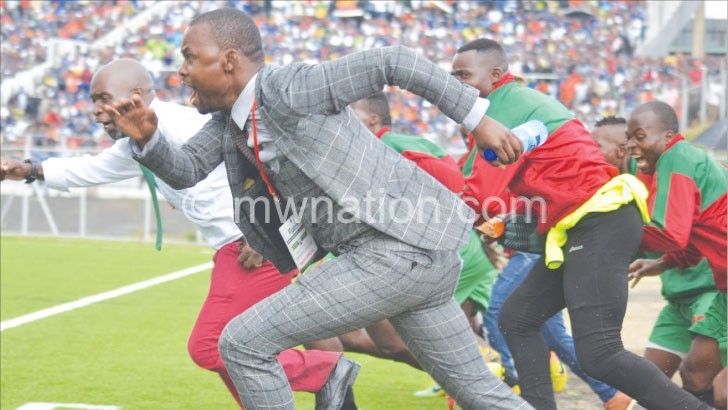 However, a K10.2 million sponsorship disagreement between the club’s sponsors Masters Security Limited company and SRFL is threatening the club from pocketing the prize money.

Masters Security FC general secretary Zacharia Nyirenda confirmed that they have not yet received the prize money as there are issues to sort out with FAM and SRFL.

He said: “The first thing is that we owe FAM about K4 million from last year’s CAF Confederations Cup participation. We agreed that we would be paying back the money to FAM in instalments through gate collections. But this was not happening not because of us, but because FAM was not deducting the money.

The GS said if FAM goes ahead with the deductions, they would get nothing from the Carlsberg Cup championship.

“If FAM succumbs to SRFL pressure then our take home is about K8 000. This is unfair to players who, after sweating on the ground, were promised 75 percent of the prize money. We accept the debt with FAM, but the SRFL sponsorship money has nothing to do with us,” said Nyirenda.

“It’s very painful that all our sweat should be for nothing. This will kill the team. When our GS [Zakaria] explained to us about this issue, we could not believe it. Why should Masters Security Limited company debt affect the football club? What if we had not won the cup? What would happen? How would they [FAM and SRFL] recover the money? We only hope they will reach an agreement that will not affect the players. Otherwise, we want our money,” he said.

SRFL chairperson Raphael Humba confirmed having written FAM demanding that the association should recoup the sponsorship money from the Carlsberg Cup prize money.

“We want FAM to deduct the money from Masters Security FC Carlsberg Cup prize money because we all know that Masters Security Limited Company owns the club. It’s not a sponsorship at all,” he said.

He said: “We want to settle the issue in a way that all parties are satisfied. In the first place, it’s indeed true that Masters Security FC are not a party to the sponsorship contract between SRFL and Masters Security Limited company because they are two different entities. But we also have to bear in mind that SRFL’s grievances.”

But Humba said as guarantor of past three sponsors—Nsejjere Sports Wear, Countrywide Car Hire and Masters Security—FAM was supposed to ensure that the sponsors fulfil their contractual agreement.

Nsejjere Sports Wear took over sponsorship from President Peter Mutharika in 2014, but just as the league felt its problems were over, the sports apparel company failed to fulfil the K10 million sponsorship for the league.

Just like Nsejjjere, Countrywide Car Hire came with pomp to succeed Nsejjere in 2016, but they too broke their promise of a K12 million sponsorship.

Humba said FAM was setting a bad precedent by allowing the sponsors to get away with this.

“What it means is that people can come and sign a contract and disregard it without any consequences.  In all these cases FAM were guarantors. They actually brokered the sponsorship deal and co-signed the contracts. We have reminded them several times to help us recover the funds, but to no avail,” he said.

Chilima to speak at conference