What Pemphero Mphande has achieved within 28 years that he has been around can only be accounted for in the book of fiction. And it is both fiction and telling real stories that has made him a household name, within the past few months.

He first hogged the limelight when he started a movement against the erection of India’s Mahatma Gandhi statue in Blantyre. This is, however, not the reason that has made him a huge attraction on social media platforms.

Of course, Pemphero cannot sing, act and dance, but still more, he has achieved a certain level of fame. His ability to connect with people on social media through his popular Facebook and Twitter accounts is one that has bolstered his social standing. Big is his Facebook page which within two months has grown from just about a thousand followers to close to 80 000 thousand active followers.

But how did this happen?

“I have always been a storyteller. Even though my Facebook page did not have a lot of followers, the few that did appreciated what I was doing,” recollects Pemphero in an interview.

In the month of February, Pemphero decided to use his emotional intelligence flair to grow his following even more and also propped up the level of interaction.

“I then started sharing my stories. The more I wrote, the more the numbers grew,” he said.

Pemphero became more creative in the same month of February, when he came up with an idea to use the romantic influence that Valentine day brings with it to this month.

“To celebrate love, I opened up my page to people to share their love stories whether good or bad ones. Every day we had a theme such as tribalism and love, suicide and mental health versus love, among others,” he recalls.

After people started trusting him with their stories, the numbers of his followers grew. As of March 16, Pemphero had over 79 000 followers.

Social media users have of late been smitten with his love stories shared on his social platforms. People privately give him these stories to share for others to advise or just appreciate their love stories.

However, Pemphero’s critics allege that his stories may be fictitious since he is a fiction writer himself.

“Stories shared on my page are 100 percent authentic. People out there have issues which they need to get off their chest,” he says.

How is he handling limelight?

Pemphero says he does not call himself a celebrity or a public figure but a people’s person who likes to interact.

He says: “Yes, these days a lot of people notice me when they see me walking down the road. “On social media I get a lot of attention but that does not change who I am. I always remind myself that before everything else I am a human being who must treat other human beings with love, respect and humility.”

He first wrote a collection of fiction stories in ink while in Form 3 at Phwezi Secondary School. His school mates would borrow it at a K100 fee although later on someone decided to take it for good.

Pemphero is on March 27 cementing his title of a writer when he launches his book titled What You See At Sunrise during a ceremony to take place at Golden Peacock Hotel in Blantyre.

He will be supported by female artist Keturah, whom he is promoting using his social media pages. She will perform some of her songs and also be selling her latest Extended Playlist (EP).

But apart from being a story teller, Pemphero is a philanthropist at heart who has raised funds for many underprivileged in society.

Right now he is leading a fundraising drive for Chikondi Kazembe, a cancer patient who needs K11 million ($15 000.00) for further treatment in India.

As of March 14, two days after Pemphero posted a notice of appeal, they had raised K3.5 million. The fundraiser continues.

Apart from this, Pemphero has done so many charity activities, including paying school fees for less privileged children.

The rising social media influencer claims to be single though many of his followers believe he is dating or is in love with a local musician.

He is a father to a four-year-old girl named Withu Mphande.

He has two siblings Taonga and Lucy who are both supportive of his social media exploits. “They are my biggest supporters and are always commenting on my posts. They have seen my page grow from a few followers to its current status,” says Mphande who did his primary school education at St Peters in Mzuzu City.

Pemphero is son to a mother who was a secondary school English Literature teacher. His father is Professor Lupenga Mphande of The Ohio State University, a multi-award winning writer and poet. Notably, his father is the 1988 book prize winner of the BBC Art and Africa Poetry Award.

“My father is not into too much social media but has influenced my artistic works but not more than how my mother has with her literature background,” he acknowledges.

“My mum has been a huge influence though and continues following me on Facebook,” he says. 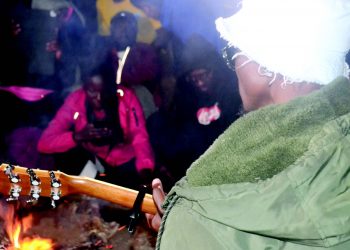