It is Saturday morning, 6.30am. Rhodrick Chikwawa parks his car on a dusty footpath close to some dilapidated houses. A dozen other cars are already parked there, creating a rare sight in this part of Machinjiri neighbourhood in Blantyre.

Chikwawa comes out of his vehicle and proceeds to the boot where he takes out a hoe and a shovel, before taking an overgrown footpath, where some manual work is about to take place. He has come to join his fellow men for a task considered petty by many—digging a pit latrine!

In the meantime, the gathering has raised a few eyebrows as residents are not used to seeing such many cars parked closed to a destitute woman’s home, except during funerals. Tongues begin to wag.

Residents begin to speculate on what the men are gathering for. It is soon evident that the visitors are coming to one elderly woman’s house in the area.

“These are her long lost children and grandchildren who have come to visit her,” says one of the residents, to which another resident responds: “And what about the hoes, shovels and picks?”

Their conversation reaches a dead end as nobody seems to have a plausible explanation for the sudden outpouring of these visitors at the destitute elderly woman’s house.

Somebody else makes another wild suggestion, alleging that the men were from a company that collects human blood and had come in the area for the ominous task. Then silence follows as it is evident that the residents cannot come up with any comprehensible story.

In the ensuing moment, the strange men’s animated chatter rises above the atmosphere as they discuss modalities on how to approach the day’s work. They are not familiar to what they are about to do as most of them have white collar jobs.

This is a group of men from South Lunzu CCAP who had come to dig a pit latrine and an attached bathroom for 84-year-old Gogo Lydia who practically lives alone. She has a distant niece who helps her with house chores from time to time.

Gogo Lydia was divorced over 30 years ago and never remarried. As if this development was not calamitous enough, Gogo Lydia lost all her six children one after another.

She has lived a solitary life for all her twilight years and her closest benefactor—a distant niece—is a mere housewife and even struggles to support herself.

On this chilly Saturday morning, the octogenarian was so dumbstruck and could not believe that the toilet and bathroom that had taken four weekends to dig and construct, was actually being handed over to her.

“I am over excited. I didn’t know that some people could consider constructing a latrine for me. This can only be God,” observed Gogo Lydia in a shaky voice. She literally had no toilet, and used to seek relief at a neighbour’s facility.

Her gratitude was echoed by South Lunzu fourth Session Clerk Peter Chipeta, who noted during the handover ceremony, that the old woman deserved to be assisted more than anyone else.

“By the way, it was, in fact, the church that built the house she lives in over 10 years ago after her other house collapsed, so this assistance is timely, but not unprecedented,” said Chipeta.

The other beneficiary of the church’s charity work, 82-year-old Gogo Efinesi Kameya, also lost all her children and husband years ago. She has four granddaughters who can hadly fend for her. Gogo Kameya had a dilapidated toilet which was a disaster awaiting the slightest natural calamity, such as a drizzle.

“I praise God for this miracle… God will never stop performing miracles among His children. Today, He has sent total strangers to rescue me.

“Who am I to deserve such a precious gift?” wondered Gogo Kameya.

But how were the two destitute women identified?

“We realised that these two elderly women had no pit latrines when we went around donating assorted items to some vulnerable households in the locality.

He said the men’s group at his church is involved in various charitable activities and reaches out to all people regardless of religious affiliation.

“Our men literally sweated it out for this project to become a reality. They worked hard despite that most of them have white collar jobs,” he says. 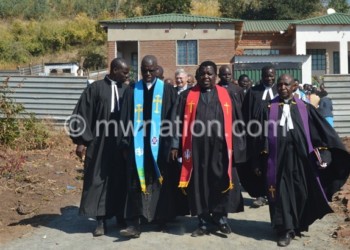