Crumbling brick by brick, Ipula, one of almost 175 primary schools in Chitipa, is no pupils’ paradise.

It is an accident about to happen, said group village head James Kameme.

“We feel forsaken,” he explained.

“The school was opened in 1954, but it has no permanent classroom block. These are death traps built by unskilled local artisans. We fear for our children. They go to school to learn, not to die.”

Malawians in the narrow border strip, which splits Tanzania and Zambia, keep enduring haunting sights of children learning in the shadow of trees and crudely-constructed blocks that are falling apart as authorities look away.

On July 4, district education manager Muhabi Chivunga visited the dilapidated school. He made arrangements to leave early as he had other engagements, but the government official, who arrived from Kasungu District recently, aptly captured the hardship Malawians in the remote locality have been concerned about for 63 years.

“It is sad that in 2017, as we are celebrating 53 years of independence, some pupils are still learning under trees. We certainly need to do something about it. The children deserve a better learning environment,” he reckoned.

In 2015, Chitipa District Council had a one-off chance to give almost 500 pupils and four teachers at Ipula decent classrooms.

Then, Chivunga’s predecessor Fanwell Chiwowa and district commissioner Grace Chirwa asked the council to set aside K8 million for construction of a modern class block at the antiquated, constrained school.

However, the councillors bizarrely resolved to allocate the District Development Funds to other wards despite acknowledging that Ipula pupils were getting a raw deal.

In their reasoning, they did not want “to put all the money in Kameme” following a K6 million upgrade of a gravity-fed water system at Chinthekwe Community Day Secondary School.

“This is purely politics, not development. Allocating public funds based on where decision-makers come from and not prioritising real needs only benefit politicians instead of the citizens in need,” he argues.

Similarly, District Education Network chairperson Sydney Simwaka argued that although the councillors have a final say on such funds, denying Ipula Primary School a long-awaited class block perpetuates their suffering.

“The councillors might have done so to please each other in the name of distributing projects equally, not to close the gaps noted by the DEM and DC,” says the activist.

Chivunga left Kameme down on his knees, rolling and clapping with gratitude when he promised to pump in K5 million for maintenance of existing buildings “from window-level to the roof”.

“The money will be used to put point on the wall, construct good verandas and doors. We are doing this because community members are hard-working and the pupils need a better place,” he said.

But putting cement points on eroded mud mortar between the cracking bricks that mark the 1973 block, twice destroyed by heavy winds, is like papering cracks.

Similar cover-ups typify a newer building constructed by locals and completed with funding from the European Union.

Another one is taking shape in a similar fashion–made of baked bricks and mud mortar to be concealed with cement lines, except on the upper layer.

The buildings mirror the locals’ determination as they tirelessly weigh in to ensure their children learn.

The school the council denied decent classrooms has emerged one of three best-run schools in Chitipa, Simwaka’s network announced.

Ipula was among the top-three primary schools which won K600 000 each from Action Aid in recognition of community-teacher  partnership in educational projects, smooth running of the schools and providing checks and balances to ensure that public funds are used effectively.

Ilengo and Njelengwa were the other star performers in the 10-point competition, marking the end of a Unicef project aimed at enhancing district accountability capacity

“The most striking thing is that unlike the other winners, Ipula is not a teachers’ development centre. They have almost everything, but Ipula is a remote school with very little to show. The fascinating thing is that community members are playing their part while waiting for government, which has the obligation to ensure every child learns in a friendly environment, to intervene,” says Action Aid programmes coordinator Albert Bwinga.

He thanked parents for taking part in creating a safe and enabling environment for learners despite the indifference and slow response of relevant authorities.

The contest in Kameme and Traditional Authority Mwaulambya created a platform to shine the light on widespread hardships of schools and generate vital data to guide distribution of resources for education.

“From the findings, it is clear that both local and central government need to increase funding for education to meet sustainable development goals. Councils should ensure 30 percent of constituency and district development funds go to the education sectors to reduce the problems faced at Ipula,” he says.

While the wait for greater funding continues, Ipula head teacher Wisdom Kameme says they are going to invest the K600 000 prize in putting a cement floor in dusty classrooms and construct a changing room for adolescent girls, among others.

“A lot more needs to be done to make the school child-friendly, but we are moving forward step by step,” said the teacher. “One day, there will be no pupil learning in the woodlot and they will sit on a smooth floor, not in these potholed classrooms where they break toes when they stumble, but modern classrooms. This is the change we want.”

And this is the future that has been elusive for 73 years. Could this be the start of the end of the long wait for improved learning conditions. n

Customer care for in the indigenous businesses 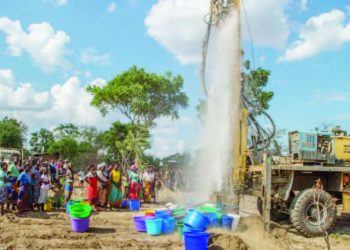