All members of Nsanje Lalanje at Balaka Chibuku Tavern are on social network group. This is making things fast as information is quickly shared among members.

On Thursday last week, leader of the house, Mtenje, asked the members to meet at Balaka Chibuku Tavern for an interaction. He said being a month, where people celebrate Christmas, it was necessary to meet.

All members confirmed their attendance. They included Benja from Mwanza, Chinyozi from Zomba, Botomani from Mchinji, Kalawa from Mzuzu, Chikoja from Dedza and Ngoma from Ntchisi.

Amayi Chekani was informed about the meeting and she made sure that Nsanje Lalanje, which is at the corner of the tavern, was cleaned. She was an interested party as she would make sales of the beer, especially with the cellular rule where each member drinks from one packet.

When members arrived, they started taking on the packets. Usually, they would take one each and then start deliberations. But Ngoma suggested that since there was no specific agenda, members should be allowed to take more than one packet. Mtenje agreed.

As they were taking the beer, a girl came and asked if she could join the group. She was allowed. Ngoma said members should know the visitor for the record.

“I am Christina, a 16-year-old girl who is in Form Three at a private secondary school in Zomba,” she said. The whole constituency was quiet.

“If you are at school in Zomba, why are you here in Balaka?” Asked Ngoma.

“You know, school is boring and being a weekend, I decided to have an excursion. So I came here,” she said.

“Do you know the meaning of Nsanje Lalanje and its objectives?” Asked Chinyozi.

“I know and everything is clear to me. I am willing to be a coordinator because I have always enjoyed the company of old men. The young boys of today are childish; all they know is playing while I want serious business,” said Christina.

Mzuzu-based Kalawa, himself a human rights activist, was unhappy. He asked the girl whether she knew that it is a crime for men to be going out with 16-year-olds.

“Which crime are you talking about because this is my body? They say there are human rights; well I have the right to go out with whoever I want and I don’t need to be schooled on that,” she said.

“But in addition to being a 16 year-old, you are also at school. Surely school-going girls should not involve themselves in kazingism,” said Botomani.

“Again you have missed the point because there is no age in school. Do you want the fresh like me or the tired like the usual coordinators? She asked.

Mtenje told her to leave because Nsanje Lalanje at Balaka Chibuku Tavern does not allow 16 year-old girls.n

Throwing money in the dustbin 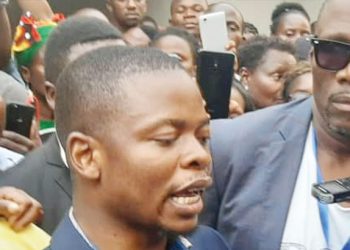