Not afraid to speak out!

Thyolo North MP Anita Kalinde talks about the business acumen she inherited from her late father, how her recent move from DPP to Joyce BandaÃ¢â‚¬â„¢s PP will benefit the people in her constituency, her inclination to speak out without fear of the consequences and the philosophies that guide her through life.

Everything centres on fathers today. How did yours influence you as a person?

My father, Sparks Anderson Jumbe, was a very hard-working person and a famous business tycoon in Blantyre. I remember when I was in Standard one, in 1977; he owned a fleet of over 20 taxis. He had lots of friends and was a big supporter of Bata Bullets, now Big Bullets. We were very close and I kept telling myself that I wanted to do business just like him when I got older.

I learnt a lot from him and this is exactly what I did. I started out buying live chickens, maize, beans and rice which I sold to Malawi Army and Lilongwe Teachers Training College. At the age of 18, I bought my first car, a Mazda 323, with money acquired from my business. By age 21, I had a fleet of 10 minibuses in Lilongwe. By the time I turned 25, I had built a house with the money I made through my entrepreneurship. I also went to South Africa and Dubai to buy stationery, motor spares and clothes which I would sell.

When I got married, I then had to concentrate on businesses within Malawi because I had to look after the kids. I eventually ventured into farming and real estate, which is what I did before I joined politics. Apart from my business acumen, I have inherited a lot of characteristics from my father. For one, I like good and quality things just like him. I have always worked hard, just like he did. I easily associate with people, just like he did.

Even though I grew up surrounded with luxuries, I ably interact with people from the lowest to the highest ranks in society. I thank God for my father and the lessons that he imparted to me. His death in 2009 was the darkest moment of my life.

It seems you were successful in business. What initiated the move into politics?

My political journey began in 2008 when the people in my village asked me to contest for a parliamentary seat. I accepted because I have a passion to serve. I also come from a political family. My uncle, Luke Jumbe, was a mayor of the City of Blantyre, my other uncle Friday Jumbe, was also a Member of Parliament and a Finance Minister. I am also very close to my sister who is married to a politicalÃ‚Â analyst, so whenever I want information or advice, I easily find it.

You were recently in the media for leaving DPP, on whose ticket you won. What initiated this move?

I was constructively removed from the DPP. The fact that I did not come in the open to declare my support for Peter MutharikaÃ¢â‚¬â„¢s 2014 candidacy was a big problem to my party. I felt he was selected through an undemocratic process and one of the reasons they gave; that Malawi is not ready for a female president, is untrue. This statement undermines women and is discriminatory.

Equality and equity between men and women is a matter of human rights and a condition for social justice. It is also a necessary and fundamental prerequisite for development. Women constitute about 52 percent of our population, we are in majority and if oneÃ‚Â says women cannot rule, then itÃ¢â‚¬â„¢s unfortunate.

What will your constituents gain from your move?

Right now, I am an Independent member who will able to speak in Parliament without fear or favour, affection or ill-will and this is in line with the oath of office that I swore.

People in the village donÃ¢â‚¬â„¢t eat politics, all theyÃ‚Â want is their social and economic development. As their Member of Parliament, I had to make an informed choice, either to serve their interest or the interest of the party.

You have admitted to being a member of Joyce BandaÃ¢â‚¬â„¢s PeopleÃ¢â‚¬â„¢s Party. When exactly did you join PP?

I began supporting the VP when she got fired from the party. She is a woman who has always inspired me a lot. She has the welfare of rural people at heart. She is an achiever and a good leader who even got the peopleÃ¢â‚¬â„¢s confidence in the 2009 General Election. She also won a parliamentary seat in her constituency.

What is your honest opinion on the political situation in Malawi at present?

We are doing well in areas of macroeconomic performance, agriculture, HIV/Aids management, integrated rural development and several others. I feel we are backsliding in the area of governance though; we are going back into a dictatorial rule. I plead with the leadership to get close to the people, listen to their demands and to use contact and dialogue as a lasting solution to conflict resolution.

If a leader finds himself or herself in conflict with religious leaders, the civil society,Ã‚Â lecturers,Ã‚Â donors and the opposition all at the same time, then s/he should know that something somewhere is not well.

What is on your political agenda?

We have built five teachers houses and one classroom block. A number of feeder roads are also periodically maintained. We have also built three nursery schools; rehabilitation of Mountain View Secondary School and the construction of Bvumbwe Market is almost complete. We have also rehabilitated and extended Bvumbwe Health Centre. I say Ã¢â‚¬ËœweÃ¢â‚¬â„¢ because I canÃ¢â‚¬â„¢t take all the credit for the work done. People in my constituency actively participate in the social development by, among other things, moulding bricks and bringing river sand. There is still a lot that we are yet to do though.

How has your life shaped your political theories, if at all?

How has politics affected your life and your family? My family has now adjusted to my career. When I am home, I love cooking. I assist my children with their home work, I read them stories and play games with them. I also try to find time to catch up with my friends, mostly on weekends.

What is your message to fellow women, to the government and communities at large concerning women and their well-being?

I advise my fellow women to love one another, to support each other and to actively participate in politics so that we have more women inÃ‚Â decision-making positions. I would also like to ask girls to work hard in school. Education is a key to sustainable development.Ã‚Â  To government, I say time has come to give equal opportunities to both men and women without gender discrimination.

What have you done for women since joining politics?

Every time I get the opportunity to speak to my fellow women, I encourage them to join the political race. I tell them to take that challenge and risk, as this is exactly what men do. I am happy that a number of women seem eager to compete in the 2014 elections.

During the last DPP meeting I attended at the New State House, I spoke directly to the President about government coming up with a fund for women like the way they have done with the Youth Enterprise Development Fund. To my surprise, he was very angry with me and said my proposal made it seem as if there was nothing that his government had done to help women.

Who are the people in your support system?

My late father, who used to encourage me a lot. My sister Ngeyi is also an influential part of my life. My mum was always too protective of me but always wanted the best for me, so she is an integral part of my life.

What are your guiding philosophies?

The fear of the Lord is the beginning of wisdom. Buy the truth and do not sell it. I also tell myself that I should never be shaken by other peopleÃ¢â‚¬â„¢s achievements but focus on what I am doing. I remind myself to climb the ladder one step at a time and operate on the theory: forward ever backwards never. All these theories keep me strong and focused.

I am a very shy person…

What are your darkest memories?

My darkest memory is when my father died. I was very close to him. He fell sick on the day I was being sworn in. It was a Monday. I talked to him thatÃ‚Â morning, but his voice sounded distant. I wished him quick recovery, not knowing that he would pass on two days later. I wish he could have heard my voice in that august House; I am sure he would have been so proud of me.

What have your happiest moments been?

When my first child James was born on 18th February, 2001. Being a first time mum, the feeling was overwhelming. I thank God for everything.

What plans do you have for the future?

I would like to build a better and secure future for my children, so whatever I do will have to revolve around or ultimately contribute to that.

The most valuable lesson I learnt from my father 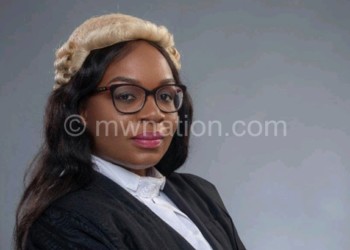