The May 21, 2019 Tripartite Elections, are over. But what is far from being over is the scorning of the king-making process.

During the campaign period, almost all stakeholders—MEC as well as UTM and MCP candidates—ruled out the possibility of anyone rigging the elections. The system is watertight. There is no room for rigging. If you want to rig, forget it or we will catch you and the law will deal with you, MEC would warn. On their part, UTM and MCP said they have sealed all loopholes for rigging. Just go and vote. APM, on the other hand, had a different narrative. Somewhere in the North he said he had evidence the opposition would rig the elections. Of course, it was an accusation his political opponents laughed off, arguing that if APM had evidence he should have taken it to the right authorities.

Of AIP woes and Bushiris’ saga

Come May 21, 2019, the elections are rigged. UTM and MCP which assured Malawians that there would be no rigging are now crying foul that in fact the polls were rigged. There should be a recount or rerun. But APM, who feared the elections would be rigged is surprisingly, quiet. You don’t cry wolf when a faulty system is working to your advantage.

Among other things, the ‘riggers’ used a simple tool—Tipp-Ex—a type of correction fluid, to do their act. MEC provided all materials that were used during the election except this one tool, Tipp-Ex. MEC told the nation in one of its 14 or so updates on results that use of this white stuff during tallying and other mandado was endemic. They did not spare any part of the country. But since MEC did not provide its staff with Tipp-Ex, we can only surmise that MEC’s staff—of course without MEC’s sanction—brought Tipp-Ex to the tallying centres for their heinous acts.

Now because MEC did not convincingly deal with the 147 plus madando brought on their table, President Peter Mutharika’s victory with a narrow margin of 3 percent of the votes cast over his closest opponent is a subject of ridicule, suspicion and dispute. Only 38.57 percent of the people voted for APM against Lazarus Chakwera’s 35.4 percent and 20 percent for UTM’s Saulos Chilima. The matter is in court.

Chakwera’s main argument is that the electoral process was fraught with many irregularities which cannot be ignored. The means should justify the end and not vice versa. If the means are grossly compromised, why should we wax lyrical about the outcome? A broken process cannot produce a credible result. It makes sense.

On madando, several questions remain unanswered. Why use Tipp-Ex? We know that Tipp-Ex is used to hide or change the original figures and words. Herein is the problem. Where two or three people are in competition, results are recorded and then changed, any sane person who suspects or feels he or she has been hard done by, has a legitimate ground to protest the result. Questions abound—what was changed? From what to what? Why? Who allowed the change? If MEC did not approve the use of Tipp-Ex, why did it accept tally sheets which had Tipp-Ex all over?

The rampant use of the correction fluid on tally sheets across the country is proof that there was a premeditated plan to fix the results in favour of or against someone. It could be that several candidates or political parties planned to use and used Tipp-Ex. It could also mean Tipp-Ex was used by one political party which had operatives across the country. My argument is not that the candidate that MEC declared winner is the one whose operatives used Tipp-ex. Rather I am saying whoever altered figures did a shameful, contemptible and ignoble thing which should have made a neutral MEC jump out of its comfort zone and make frantic efforts to investigate the anomalies before rushing to accept the results.

Then there were international auditors who were hired by UNDP to assist in the validation of the tally sheets. The Tipp-Exed tally sheets slipped through the hands of these ‘certified’ international auditors. MEC could not question this anomaly on the back of the blind trust and confidence it had in UNDP—that hired the auditors. MEC were looking at themselves and saying who are we to question or reject work done by auditors hired by UNDP. It is sad that this election will go down in history as one of those electoral processes that were well managed only to be messed up at the very end.

Malawi stands to benefit from newly approved WHO HIV test

Where is the 147 Madando Report? 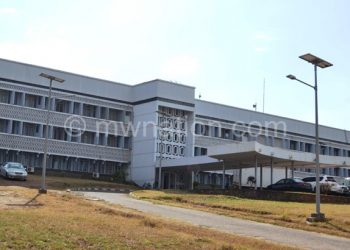 Of AIP woes and Bushiris’ saga

Where is the 147 Madando Report?